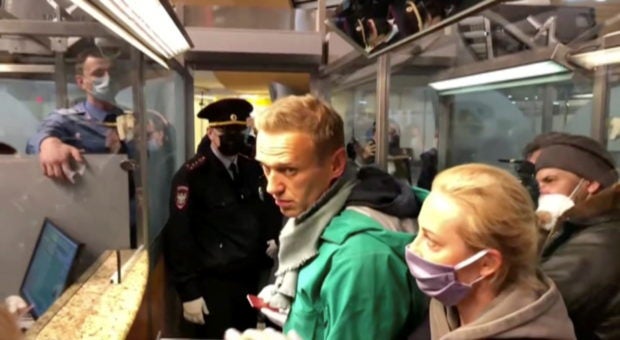 MOSCOW — Police detained prominent Kremlin critic Alexei Navalny on arrival in Moscow on Sunday after he flew home to Russia from Germany for the first time since he was poisoned last summer, triggering a political clash with the West.

The move, which could see Navalny jailed for 3.5 years for allegedly flouting the terms of a suspended prison sentence, may reignite political pressure on the West to tighten sanctions on Russia, especially against an $11.6 billion project to build a natural gas pipeline from Russia to Germany.

In a case that drew wide international attention, Navalny was poisoned last summer by what German military tests showed was a Novichok nerve agent, a version of events the Kremlin rejects.

Navalny recovered in Germany and after he said last week he planned to return home, the Moscow prison service (FSIN) said it would do everything to arrest him once he returned, accusing him of flouting the terms of a suspended prison sentence for embezzlement, a 2014 case he says was trumped up.

But the 44-year-old opposition politician laughed and joked with journalists on his plane, saying he was not afraid and did not believe he would be arrested.

Four masked police officers asked Navalny to accompany him at passport control at Moscow’s Sheremetyevo airport, before he had formally entered Russia. They did not explain why. Navalny, after kissing his wife Yulia on the cheek, walked away with them.

Navalny’s supporters have said incarcerating one of President Vladimir Putin’s most prominent domestic critics could turn him into a Nelson Mandela-like figure and an increasingly popular symbol of resistance to the Kremlin.

The Kremlin, which only refers to him as the “Berlin patient,” laughs that off. Putin allies point to opinion polls that show the Russian leader is far more popular than Navalny, whom they call a blogger rather than a politician.

Minutes before he was detained, Navalny had said: “I am not afraid. I know that I am right. I know all the criminal cases against me are fabricated.”

Navalny says Putin was behind his poisoning. The Kremlin denies involvement. It says it has seen no evidence that he was poisoned.

Navalny’s plane from Berlin was diverted to Sheremetyevo airport from another Moscow airport at the last minute for a technical reason in an apparent effort by authorities to thwart journalists and supporters greeting him.

Moscow’s FSIN said in a statement Navalny had been detained due to the alleged violations of his suspended prison sentence and would be held in custody until a court hearing later this month that will rule whether to convert his suspended sentence into a real 3.5 jail term.

Navalny faces potential trouble in three other criminal cases too, all of which he says are politically motivated.

U.S. President-elect Joe Biden’s incoming national security adviser Jake Sullivan said on Twitter: “Mr. Navalny should be immediately released, and the perpetrators of the outrageous attack on his life must be held accountable.”

U.S. opposition to the gas pipeline project, Nord Stream 2, is bi-partisan and Biden has described the pipeline as a “bad deal” for Europe.

“He’s (Navalny’s) gone from being a petty hooligan to then being an enemy that they need to humiliate, crush and punish,” she wrote on messaging app Telegram.

Navalny, joined by his wife, spokeswoman and lawyer, flew from Berlin on a flight operated by Russian airline Pobeda, owned by state-controlled Aeroflot.

His supporters gathered at Moscow’s Vnukovo airport despite bitterly cold weather and over 4,500 new coronavirus cases a day in the Russian capital.

The authorities’ decision to switch airports to Sheremetyevo airport thwarted them.

OVD-Info, a monitoring group, said police had detained 53 people in Moscow and five in St Petersburg.

The Moscow prosecutor’s office, which had officially warned 15 pro-Navalny organizers, had said meeting him en masse was illegal because it was not sanctioned by the authorities.