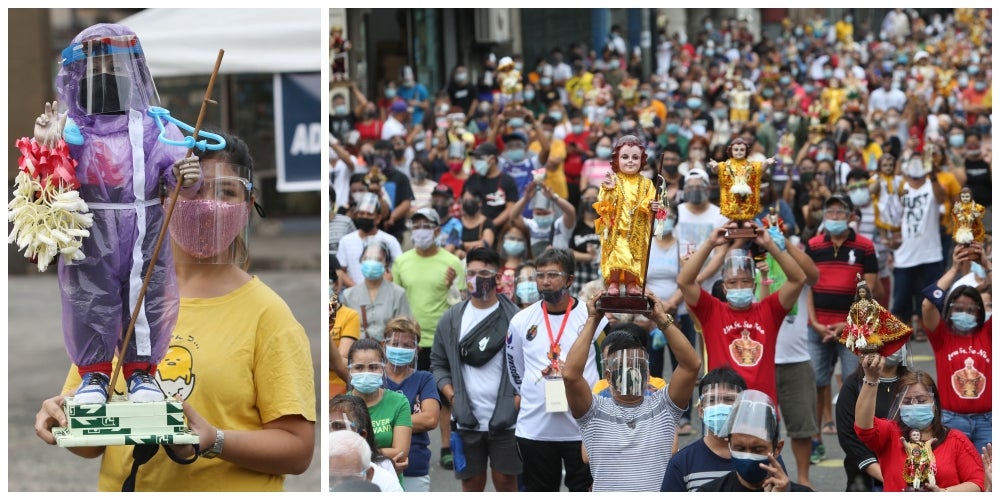 PANDEMIC-PROOF A woman carries an image of the Child Jesus garbed in a protective gear (left) as thousands of others attend a Mass marking the Feast of the Santo Niño in Tondo, Manila, on Sunday (above). —MARIANNE BERMUDEZ

Amid this year’s celebration of the Feast of the Santo Niño, which is still being commemorated despite its disruption by the coronavirus pandemic, a Catholic bishop has called on devotees to ensure the safety of children who, at this time, face the threat of violence, sexual abuse and human trafficking via the internet.

“Sexual abuse happens even within the family, especially now during a pandemic. We should all be vigilant to prevent this. If we really are devotees of [the] Santo Niño, then we must cooperate in fighting against child abuse,” Manila Auxiliary Bishop Broderick Pabillo said on Sunday.

As thousands of devotees celebrated another beloved Catholic tradition, this time from their homes, Pabillo pointed out that their devotion and faith could be shown by caring even for children who were not their own—especially victims of violence and abuse.

He emphasized that sexual abuse and pedophilia were among the “scandals” confronting the Church itself.

In December last year, the Philippine Commission on Women (PCW) reported 13,923 cases of violence against women and children from March 15 to Nov. 30—the period covering the lockdown in several parts of the country to the general quarantine toward the latter part of 2020.

Of that figure, 4,747 were cases of violence against children.

While the number was lower compared with that in 2019, the PCW pointed out that victims of abuse might have had little chance of rescue because of government restrictions amid the pandemic, such as the ban on children from leaving their homes.

“What programs have we implemented to make sure that our children remain happy? It is not enough that they are cooped up in their homes,” Pabillo said.

“We need to give them extra time to teach them, play with them, tell them stories and pray for them. We need to create programs for children during this pandemic,” he said.

While Church officials urged devotees to celebrate the Feast of the Santo Niño in their homes, as many as 18 Masses were still held in some churches, but limited attendance to 150 to 300 people.

Read Next
Senate to continue vaccine probe
EDITORS' PICK
How to lose a PH genius: Wesley So officially a US citizen
Smart reinforces superiority with best speed and mobile video experience in PH
Every Filipino home can now be a smart home with realme TechLife
New 3,045 COVID-19 cases push PH total active cases to 40,074
LTO’s P500-M deal for screws draws scrutiny
Nestlé Philippines’ ‘NESCAFÉ Plan’ bags Grand Anvil at PRSP 56th Anvil Awards
MOST READ
How to lose a Filipino genius: Wesley So officially a US citizen
Robredo on Sara Duterte leading poll surveys: Why are Filipinos drawn to leadership of this kind?
LTO’s P500-M deal for screws draws scrutiny
Duterte order to police, military on Reds: ‘Kill them all’
Don't miss out on the latest news and information.