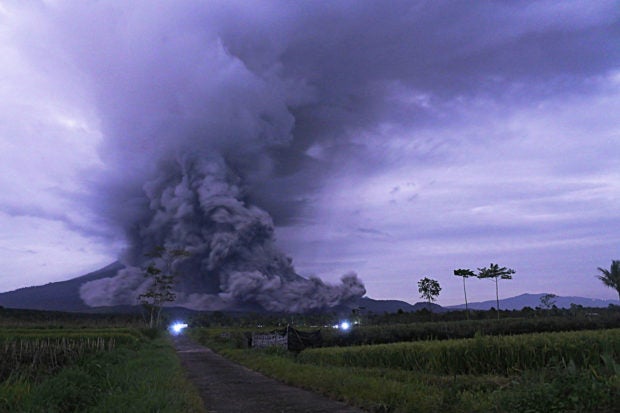 A plume of volcanic matter from Mount Semeru drifts down its slopes in Pronojiwo, Lumajang, East Java, on Dec. 1, 2020. The Jakarta Post/Asia News Network/Seno

JAKARTA — Mount Semeru in Lumajang, East Java, spewed clouds of gas and ash as far as 4.5 kilometers away on Saturday afternoon as authorities warned of the potential for continuing volcanic activity.

Local authorities reported that the plumes rolled down from the volcano’s Jonggring Kaloko crater at 5:24 p.m. local time and drifted southeast. Ash also rained down north of the volcano.

“The villages of Sumber Mujur and Curah Koboan [in Lumajang] are located in the trajectory of the hot clouds,” Lumajang regent Thoriqul Haq said on Saturday in a statement.

Authorities have warned residents living in the two villages to be on alert for continuing volcanic activity and have advised people living in the Curah Kobokan river basin to stay alert for a possible “cold lava” flow triggered by high intensity rainfall combining with volcanic material.

As of Saturday afternoon, authorities had not recorded any casualties from the increased volcanic activity.

The volcano erupted in December 2020, forcing authorities to evacuate around 550 people. Other volcanoes across the archipelago have shown increased activity over the past several months.

Mount Ili Lewotolok in Lembata, East Nusa Tenggara, erupted in late November 2020, prompting more than 4,600 residents to flee their homes for safety. Indonesia sits along the Pacific Ring of Fire and has 127 volcanoes – 69 of which are active.