(Editor’s Note: Every year since 1991, the Philippine Daily Inquirer has sought to recognize the Filipino individual or group who, in the judgment of the newspaper’s editors, made the most positive impact on the life of the nation.) 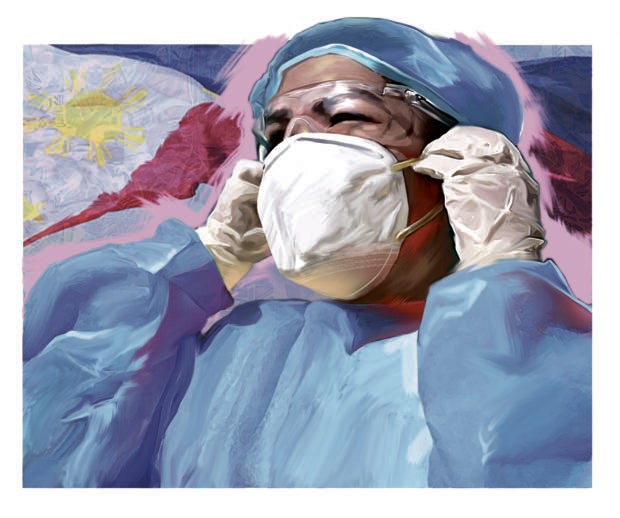 Masked and hooded, or covered from head to foot with protective suits, their eyes peering into a world threatened by an unseen, merciless enemy that they themselves fear, they heeded the call to serve and put their own lives on the line so that others may heal and live.

Many of them could have been the last to gaze into the eyes of those in the throes of death from COVID-19, their comforting words the last to be heard. Their gloved hands held the very sick, the frightened, despairing and lonely in medical facilities where many fear to tread or are not allowed in. Never have their oaths as medical practitioners been so tested.

When it became clear that the highly transmissible novel coronavirus had made landfall in the Philippines in the beginning of 2020, or even earlier, health experts sounded the alarm. But it took the government some time to gather itself and face the enemy head-on.

It did not take long for the virus to feel at home in a country where health protocols are observed more in the breach. Soon, when the infected and symptomatic became gravely ill, health-care practitioners became by default the first line of defense: the nurses, doctors, medical technologists and staff in hospitals and health facilities where many life-and-death battles would be lost or won. Like ducks to water, they went down to the trenches, the doctors and nurses with their Hippocratic oath and Nightingale pledge under their belt.

They came to be called health-care front-liners (the latter word heretofore rarely used except in shooting wars). Front-liners because they were front and center, in the enemy’s crosshairs, so to speak, directly receiving and caring for COVID-19 patients. Meanwhile, out in the field, equally indispensable epidemiologists, scientists, other public health experts and law enforcers tried to find ways to track and slow down the spread of the virus.

No one knew then what havoc the virus would wreak on the planet and on this country so rich in human and natural resources but so short in many other essentials, disaster preparedness among them, as well as compassionate, creative and proactive leadership. 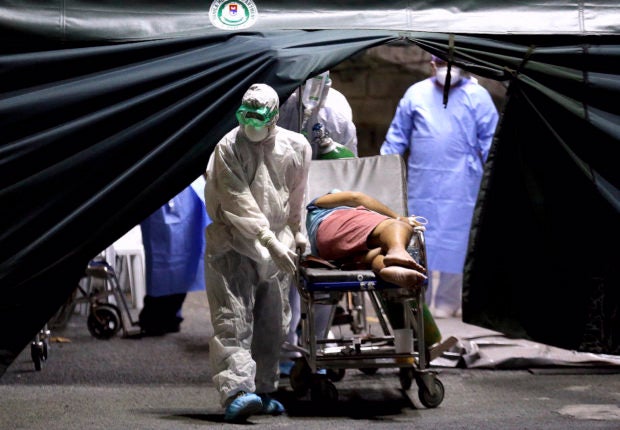 FIRST FEW CASES Health workers begin tackling an unfamiliar and dangerous challenge in this April 2020 photo of a Covid-19 patient being brought into a public hospital in Manila. —RICHARD A. REYES

After the World Health Organization officially declared on March 11, 2020, that a Covid-19 pandemic was indeed sweeping the globe, and two months into a lockdown that began in the Philippines in mid-March and put major cities and provinces under various degrees of quarantine that spelled economic disaster, the count of front-liners infected and dead of COVID-19 began.

By the end of the year a total of 13,629 front-liners had been infected and 76 had succumbed.

The Philippines is said to have had the longest lockdown in the world. And yet…

While the government had promised material compensation befitting wounded and fallen health-care front-liners, there were instances where families, though grieving still, needed to collect on the promises. But they had to contend with the government’s “confusing guidelines on hazard pay” and what one bereaved described as “the penchant of government to say things that it would not fulfill.” 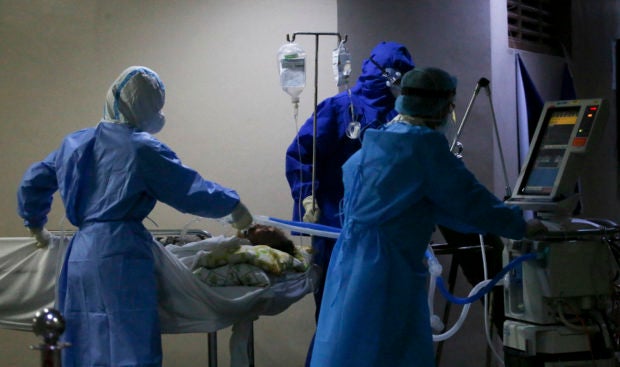 TILL THE VERY END For many Covid-19 fatalities forced to be isolated from their loved ones, the last voice they heard or touch they felt was that of medical workers. —LYN RILLON

All these, while proof of massive corruption was surfacing at Philippine Health Insurance Corp. (PhilHealth), the state-run health insurance agency.

The front-liners soldiered on as many other Filipinos ensconced safely at home whined about not knowing what to do with themselves and their time; as jobless breadwinners begged for food for their families and business people counted their losses; as some turned to prayer and pious works, or became inspirational gurus, preachy sages and poets on social media; as stranded persons camped out on the streets.

They may have had their share of personal issues, but the front-liners held the fort in their respective “war zones.”

Did they even have the time to contemplate how the world had seemingly ground to a halt but their lives had not—to the point that they could not even pee regularly because of the time it took to shed their protective armor under which they sweated profusely even in freezing, antiseptic hospital units?

At one point in August, the health-care system staggered dangerously under the heavy load of cases, and the front-liners cried out for a reprieve. But not everyone in the government, not even President Duterte, was sympathetic.

Yet, overworked, underpaid and underappreciated, they have learned to live with this national reality, all the while knowing that greener pastures awaited them elsewhere. But a ban imposed in April prevented nurses from leaving the country, dashing the hopes of those bound for dream jobs abroad. 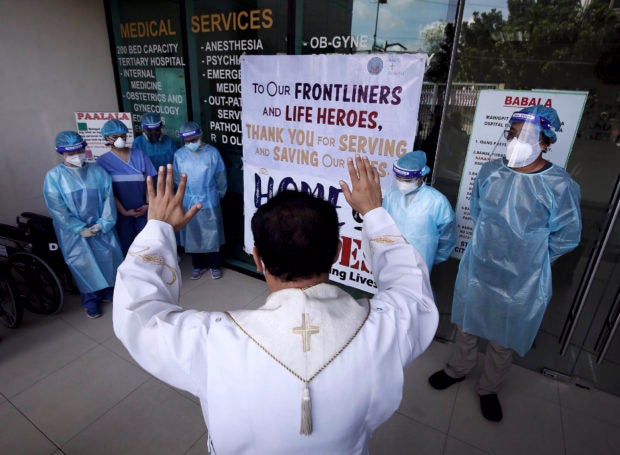 FOR STRENGTH Prayers are said not just for the sick and dying—but also for the professionals risking their own lives as they perform their duty. —RICHARD A. REYES

The Philippine health-care system is in short supply of health practitioners. According to the International Labor Organization, there are 430 doctors and nurses per 10,000 people in Germany; 337 in the United States; 254 in Britain; and only 65 in the Philippines.

Why? As a nurse bound overseas put it, she was “better off in a war zone in the Middle East than at home.”

Health-care workers serving at home as front-liners are hailed as modern-day heroes in scrubs. They now receive heaps of praise and thanks from their fellow Filipinos, likened to soldiers in a war that has yet to see an end.

But these lifesavers have also been victims of discrimination and harassment, even regarded as life-threatening, because the ignorant saw them only as carriers of the dreaded virus.

Community ostracism was not uncommon: A nurse was driven out of her living quarters, another doused with bleach, the collective plied with tactless remarks by an elected official. A front-liner was barred from a business establishment. A nurse positive for COVID-19 was found seated on a sidewalk; she was made to leave her boarding house and she had nowhere else to go.

A number of front-liners demur, saying: “We are just doing our jobs, we are not heroes.”

But to COVID-19 survivors they are heroes, God-sent angels in protective suits. Nowhere is this more evident than in hospital scenes of survivors being wheeled out for discharge and applauded by medical staff. The survivors and their families return the applause. Behind their face shields and masks, the thanked and the thankful break into smiles and weep.

With COVID-19 vaccines now being manufactured, Filipinos wait with both relief and a studied skepticism exacerbated by the recent controversy on the illegal procurement and administration of contraband vaccines on the Presidential Security Group, which their Commander in Chief has defended and justified.

The health-care front-liners do not seem to be on the priority list.

To speak of the front-liners in general terms only is to miss the heart of the story. For more than just collectively adhering to their sworn duty and professing love for their work, they have given a human face, a human voice, and a human feel to the word “compassion,” and a breadth of meaning to the word “vocation,” what it is to hearken to the call not just of duty but also of something loftier, nobler.

During the Oct. 20 “Bayaning Nars” awards, the Philippine Nurses Association quoted Pope Francis as paean to their 15 honorees, 14 of whom were dead: “Nursing is more than a profession, it is a vocation, a dedication. During this pandemic, they have given an example of heroism. Some have even given their lives.”

An editor who voted for the health-care front-liners as the Inquirer’s 2020 Filipinos of the Year wrote: “Despite being unprepared for the massive and unprecedented health emergency, they held their ground, putting themselves in the line of fire and preventing an even greater number of Filipinos from getting sick and dying of COVID-19. Many of them lost their own lives in this epic struggle. They were fearful but were determined to serve in the early days of the pandemic when the prospect for relief was bleakest. They humbly said that they were the last line of defense in this fight, but in reality and in many instances, they were the only line of defense.”

Time was of the essence in saving lives. In the early days of the pandemic a young doctor biked daily to the overcrowded Philippine General Hospital instead of waiting for rides that had yet to be arranged for front-liners. She was hit by a truck and died.

A young ER nurse only two years out of college tested positive for COVID-19 not once but twice. Each time she simply quarantined herself in her apartment, and after testing negative, went right back to work. It was her generation stepping up to the challenge. 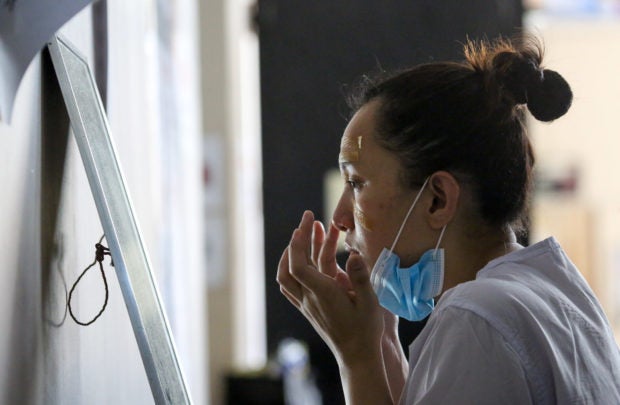 BATTLE WEARY Forced to keep goggles and a face mask on during 12-hour shifts, a nurse has to apply a gel dressing on her face to prevent chafing of the skin. —LYN RILLON

Here is an excerpt from her journal in the early months: “It’s been tough psychologically. I leave my 12-hour shift absolutely exhausted especially when I go over worst cases in my head. It is all very scary, to be perfectly honest. It is really a crucial moment for all of us in health care during this time. It is crazy yet so rewarding. We show up strong, united and ready to provide care every single day. But we are also losing staff to sickness or quarantine.

“It’s been chaotic, people flock outside the ER just to have their swabs done. We have set up a ‘tent city’ outside the ER to keep us from being overrun by contagious people. We are triaging to alleviate the pressure on the ER. As ER nurses we cannot lose our cool, we’ve seen it coming, we come prepared but this one is different.”

Different and unprecedented, indeed, the COVID-19 pandemic has taken its toll on every aspect of life. It has also drawn out the best from many of us and, without doubt, the best and the most from the health-care front-liners.

Long after this historic pandemic is over and, God forbid, when an unknown peril lurks again on the dystopian horizon, we will look back at 2020 with awe and gratitude for the health-care front-liners who pulled us from the brink. And hope they would be there again for us as they were, and still are.