The first case of the more contagious UK variant of the virus that causes COVID-19, a severe respiratory disease, was a Filipino male resident of Quezon City who returned from a trip to Dubai in the United Arab Emirates (UAE) on Jan. 13.

Magalong on Saturday said the country’s contact tracing efficiency ratio was just 1:7 to 1:9, far from the ideal 1:37, or 37 contacts of up to three generations, or layers of possible transmission, per infected person.

Among the challenges in achieving this “ideal ratio” is the smaller number of contact tracers since most had their contracts terminated on Dec. 31, 2020, due to budget constraints, Magalong said.

The discovery of the more transmissible UK variant in the country also poses an added challenge as this necessitates intensified contact tracing efforts, he said.

“Local governments must really make the move. They should not simply rely on the Department of Health or the Philippine National Police,” Magalong said at the Laging Handa briefing.

“Local governments should take the lead in contact tracing. Mayors must be directly involved so that they could maintain their contact tracing efficiency ratio,” he said. 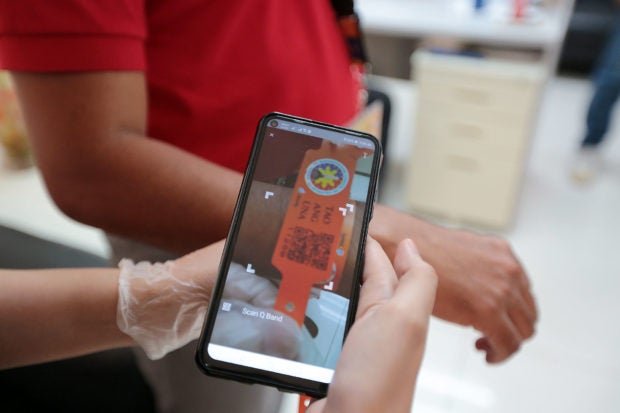 Undersecretary Jonathan Malaya, spokesperson for the Department of the Interior and Local Government (DILG), said in a statement on Saturday that only a third of the 50,000 contact tracers employed last year would be rehired in 2021.

He said the DILG would have to work “with the available budget” allocated for contact tracing to continue the service.

“Hence, only 15,000 CTs (contact tracers) will be rehired under a six-month contract in the meantime while we wait for the release of additional funds,” Malaya said.

The Department of Budget and Management allocated P1.9 billion for the hiring of contact tracers in 2021. Of this amount, P500 million is included in the 2021 national budget, and P1.4 billion is from the unreleased balance under Republic Act No. 11519, or the Bayanihan to Recover as One Act.

Malaya said the DILG field offices and local government units were directed to immediately assess the performance of the contact tracers and select those “who have effectively and efficiently performed their assigned tasks” for rehiring.

The DOH earlier said contact tracing efforts would be expanded to include third-generation contacts of the patient found with the UK variant of COVID-19.

The deaths and recoveries left 28,674 active cases. Majority, or 84.7 percent of them were mild, 7.7 percent asymptomatic, 4.6 percent critical, 2.6 percent severe and 0.14 percent moderate.

In Quezon City, Mayor Joy Belmonte said local authorities traced 143 individuals linked to the man infected with the UK variant. They include those who had close contact with him and their contacts, plus the health workers and eight other passengers on the plane with him who were also from Quezon City and who are now in quarantine.

She said they were still looking for one of these passengers.

The city also tested the man’s family members even though he had not interacted with them upon his arrival. His girlfriend who traveled with him was reswabbed, Belmonte said. The results of all their tests are being awaited, she said.

The good news, Belmonte said, was that the man was asymptomatic and was not even hospitalized.

“The patient is actually doing quite well,” she reported during Saturday’s Laging Handa briefing. “He is just waiting to complete his antibiotics and for his doctor to declare that he is well.”

According to Belmonte, this shows that while the UK variant was more transmissible, it does not necessarily cause more severe symptoms.

She also tried to ease the anxiety of residents in the Kamuning neighborhood where the man lived, saying he was not even able to step into his home as he was immediately quarantined in a hotel after he tested positive for coronavirus shortly after his arrival from Dubai.

Kamuning residents had panicked and were discriminated against after his address was made public. Some residents were told not to report for work even though the patient had not interacted with them, Belmonte said.

Some people also refused to visit markets and grocery stores in Kamuning, she added.

In a memorandum earlier this week, DILG Officer in Charge Bernardo Florece Jr. directed regional offices “to prioritize the rehiring of contact tracers” in localities with “active cases and have rising active cases.”

He said the quota was based on the number of active cases in a particular region and the 30 percent across the board distribution of the 15,000 contact tracers to be rehired for 2021.

Another 451 contact tracers will be hired in Mimaropa; 433 in Region 8; 352 in Region 2; and 267 in the Cordillera Administrative Region.

—With reports from Dexter Cabalza and Patricia Denise M. Chiu