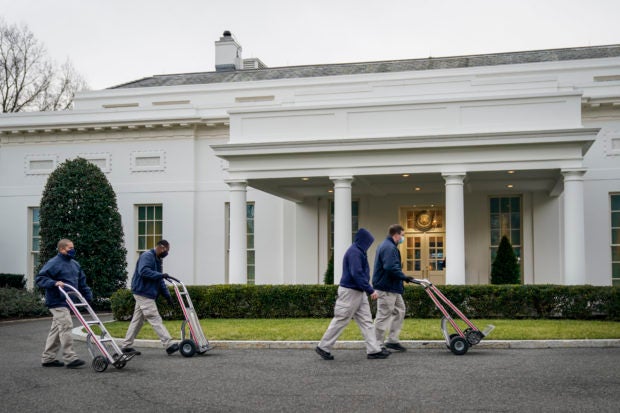 WASHINGTON, DC – JANUARY 15: Workers roll dollies past the West Wing of the White House on January 15, 2021 in Washington, DC. According to recent news reports, President Donald Trump is slated to leave Washington the morning of Jan. 20th, hours before President-elect Joe Biden will be sworn-in as president. Drew Angerer/Getty Images/AFP

WASHINGTON – By the time Joe Biden is sworn in as the 46th US president Wednesday, his scandal-tainted predecessor Donald Trump will already be far away, having helicoptered out of the White House a last time earlier that morning, an official said Friday.

Trump will be the first president in a century and a half to snub the inauguration of his successor.

An official who asked not to be identified said Trump would go to his Mar-a-Lago golf club in Florida, which is his legal residence and will become home after the White House.

He is expected to be out of town well before Biden is sworn in on the steps of the Capitol building at exactly noon. 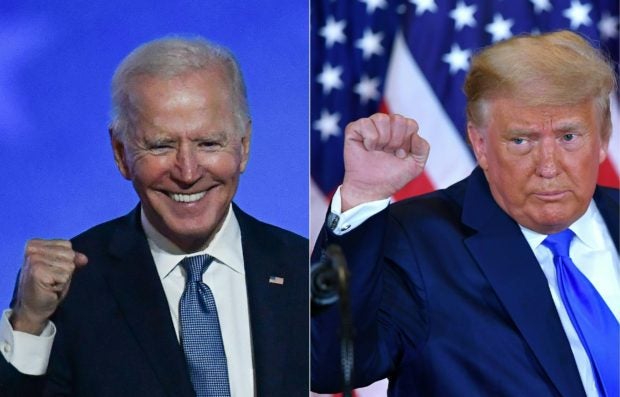 After spending more than two months trying to overturn the results of the November election, pushing false conspiracy theories about fraud, Trump’s presence had not been expected at the inauguration.

The final straw came on January 6 when Trump gathered a huge crowd of supporters on the National Mall and once more claimed that they had to fight to stop a fraudulent election. A mob then stormed Congress, halting proceedings underway to certify Biden’s win.

For longer than anyone can remember, outgoing presidents have stood by their replacement on the Capitol steps, watching them take the oath — and in so doing showing visible support for the peaceful transfer of power.

Trump, who was impeached for a record second time in the wake of the Congress storming, has also broken with more discreet protocol by refusing to invite Biden and his wife Jill Biden to the White House for a traditional cup of tea in the Oval Office.

On Friday, Vice President Mike Pence did make the gesture of telephoning his incoming counterpart Kamala Harris, a source said.

Although this came only five days before inauguration day — and more than two months after the election — The New York Times said Pence offered his congratulations and belated assistance to Harris, describing the exchange as “gracious and pleasant.”

Trump’s extraordinary exit adds to the nervous atmosphere around an inauguration that was already set to be like no other.

In the wake of the Congress attack, thousands of National Guard troops have taken up position around central Washington. And even before the security nightmare, organizers had been forced by Covid-19 safety measures to nix the traditional big crowds and long guest lists.

For Biden, the subdued ceremonies will quickly be followed by a mammoth To Do list. His administration faces multiple crises on day one, including the stumbling national Covid vaccination project, a precarious economic recovery and Trump’s looming impeachment trial in the Senate.

At the same time, Biden will have to cajole the Senate into rapidly confirming his cabinet appointees, allowing him to form a government and bring stability back to the country.

Incoming White House press secretary Jen Psaki told reporters on Friday that the Senate is fully capable of juggling the impeachment trial along with the urgent confirmations.

“The Senate can do its constitutional duty while continuing to conduct the business of the people,” she said.

“Our expectation and hope and belief is that we need to walk and chew gum at the same time.”