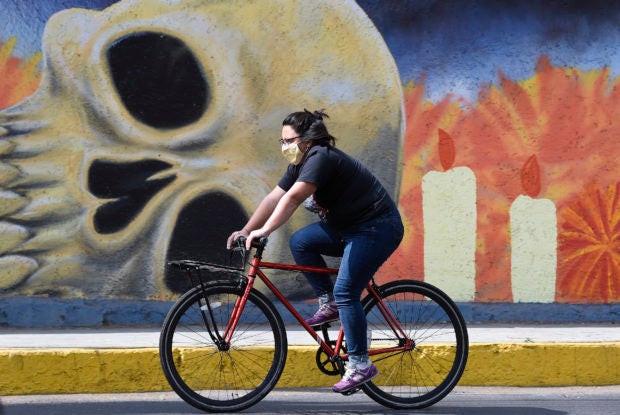 A woman wearing a face mask rides a bicycle past a mural showing a skull on one of the walls of the San Nicolas Tolentino cemetery in the municipality of Iztapalapa in Mexico City on January 15, 2021, amid the COVID-19 novel coronavirus pandemic. (Photo by Alfredo ESTRELLA / AFP)

PARIS, France – The global death toll from COVID-19 passed two million on Friday, with the World Health Organization (WHO) urging mass vaccinations as the pandemic progresses at a record rate.

As of 1825 GMT on Friday, at least 2,000,066 people worldwide had been confirmed dead of the virus that first emerged in Wuhan, central China, in late 2019, according to an AFP tally.

The grim milestone came as US pharmaceutical giant Pfizer said shipments of its vaccines would slow for a period in late January — a blow to fledgling campaigns to immunise people against the virus.

The WHO on Friday called for a worldwide acceleration in vaccine rollouts — as well as a ramp-up in efforts to study the sequencing of the virus, to tackle troubling new strains emerging around the world.

“I want to see vaccination under way in every country in the next 100 days so that health workers and those at high risk are protected first,” Tedros Adhanom Ghebreyesus told a press conference in Geneva.

His call came as infections snowballed, with 724,000 new cases recorded on average per day globally over the past week, according to AFP’s tally — a record 10 percent increase on a week earlier.

While countries from Spain to Lebanon have announced record caseloads, the surge has been most marked in Latin America and the Caribbean, where confirmed cases leapt 26 percent this week.

In Europe, which has suffered more than 650,000 coronavirus deaths, there are concerns that delays to the Pfizer jabs could further slow a vaccine rollout that has already faced heavy criticism.

Pfizer, which jointly developed its vaccine with German company BioNTech, said EU countries could expect delayed deliveries in the coming weeks due to works at its plant in Belgium.

It promised that there would be “a significant increase” in shipments in March, and the European Commission said all vaccines ordered by the bloc for the first quarter would be delivered on time.

But ministers from Denmark, Estonia, Finland, Latvia, Lithuania and Sweden said in a joint letter that the situation was “unacceptable” and “decreases the credibility of the vaccination process”.

Many countries have meanwhile doubled down on restrictions as the cases mount.

Portugal entered a fresh lockdown Friday, and new curbs on populations were announced from Italy to Brazil.

At the Meissen crematorium in Germany’s Saxony state, coffins were stacked up to three high, awaiting cremation.

Manager Joerg Schaldach said that anyone still questioning the severity of the pandemic should take a look at the bodies piling up.

“This is heavy work, so why don’t the Covid-19 deniers come and do it,” he said. “We have a disastrous situation here.”

Brazil’s northern Amazonas state announced a curfew from 7.00 pm to 6.00 am, with the health system in state capital Manaus at breaking point.

The city’s hospital intensive care units have been at 100 percent capacity for the past two weeks, while medical workers are battling a shortage of oxygen and other essential equipment.

“This is a situation where your whole system begins to implode,” said WHO emergency director Michael Ryan.

Fear has been growing that a new strain of the virus found in Brazil could be more contagious, just like the variants recently found in Britain and South Africa.

Britain has banned all arrivals from South America and Portugal in a bid to prevent the new variant arriving, while also announcing Friday that all arrivals to the UK must show negative test results and quarantine.

Warnings from cash-strapped companies and governments about the economic fallout of the crisis are also piling up.

Italy said it was seeking to borrow an extra 32 billion euros, while senior French rail executive Christophe Fanichet said Eurostar was in “a very critical” state as the pandemic has reduced its service to just one London-Paris connection per day.

The UN aviation agency on Friday predicted “prolonged depressed demand” for air travel and more financial woes for airlines, following a year of fewer flights and big losses blamed on the pandemic.

Air travel plunged 60 percent in 2020 as nations closed borders and restricted travel to slow the spread of Covid-19, the International Civil Aviation Organization said in a report.

In the United States, President-elect Joe Biden unveiled a proposal for a $1.9 trillion relief package aimed at revitalising the world’s largest economy.

The package will include a rise in the federal minimum wage to $15 an hour, help for struggling state and local governments, and a boost in the size of stimulus payments to citizens, from $600 to $2000.

“In this moment of crisis… we cannot afford inaction,” Biden said.