MANILA, Philippines – A day after Chief Justice Diosdado Peralta has assigned a judge to handle the case of nine dismissed policemen involved in the killing of four Army intelligence officers, a warrant has already been issued for their arrest.

Aside from the arrest warrant, Justice Secretary Menardo Guevarra said the court has also granted their motion for a hold departure order to make sure that all the accused would not be able to leave the country.

The nine police officers were previously under the custody of the Philippine National Police (PNP), but they were released after no arrest warrant has been issued by the court and they have been dismissed from service. 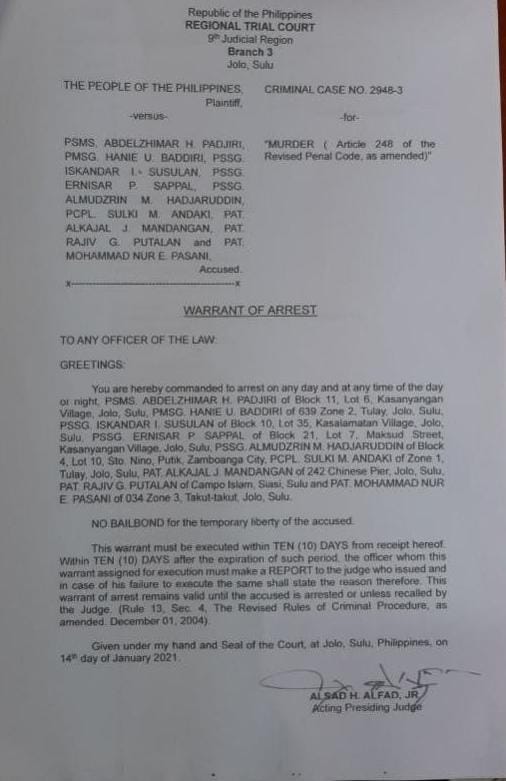 Read Next
5 COVID-19 deaths in 15 days alarm Cagayan officials
EDITORS' PICK
Every Filipino home can now be a smart home with realme TechLife
LTO’s P500-M deal for screws draws scrutiny
How to lose a PH genius: Wesley So officially a US citizen
New 3,045 COVID-19 cases push PH total active cases to 40,074
Smart reinforces superiority with best speed and mobile video experience in PH
Nestlé Philippines’ ‘NESCAFÉ Plan’ bags Grand Anvil at PRSP 56th Anvil Awards
MOST READ
How to lose a Filipino genius: Wesley So officially a US citizen
US lays out list of aid to ‘satisfy’ Duterte following VFA payment demand
Robredo on Sara Duterte leading poll surveys: Why are Filipinos drawn to leadership of this kind?
LTO’s P500-M deal for screws draws scrutiny
Don't miss out on the latest news and information.