Biden to unveil economic plan as US recovery buckles 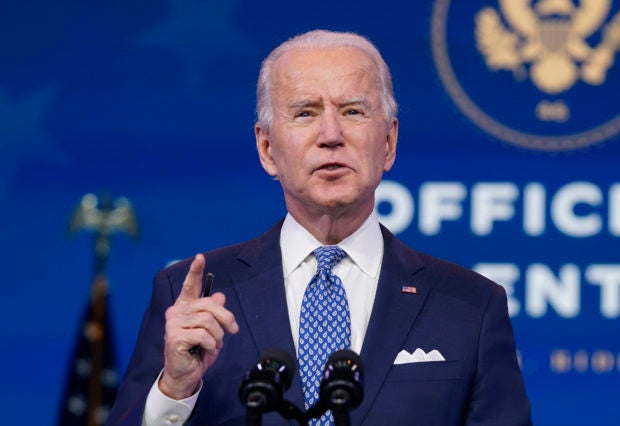 WASHINGTON – President-elect Joe Biden on Thursday will unveil his plan to revive the US economy, as evidence mounts that its recovery from the coronavirus pandemic is flagging despite trillions of dollars in government spending.

With his fellow Democrats narrowly controlling both houses of Congress, Biden appears to have a good shot at passing a third massive rescue package that could include everything from another round of stimulus payments to tax hikes on the rich to an increase in the minimum wage.

“We need more direct relief flowing to families (and) small businesses, including finishing the job of getting people the $2,000 in relief,” Biden said last week, referring to the last package that provided payments of $600 in direct payments.

The funds could help revitalize a recovery that appears to be buckling under the weight of the nationwide surge in Covid-19 cases.

The latest government data shows the economy shedding jobs in December and weekly layoffs continuing at a pace above the worst of the 2008-2010 global financial crisis.

Biden will take office on Wednesday after a tumultuous transition that saw violent supporters of outgoing President Donald Trump invade the US Capitol as lawmakers were meeting to certify the Democrat’s election victory.

Biden’s stimulus is likely to build on the two massive relief packages Congress approved in 2020, and include an extension of unemployment benefits that have helped tens of millions of people pay their bills after losing their jobs during the pandemic.

He pledged last week to provide aid to US municipalities that may have to fire thousands of teachers, police officers and firefighters across the country, and more help to small businesses, especially minority-owned firms.

The president-elect called $600 stimulus checks included in the aid package approved in the final days of December “simply not enough,” and said he will push to raise the payments.

But with only the slimmest of majorities in Congress — including an evenly split Senate where Vice President-elect Kamala Harris will have the tie-breaking vote — Democrats will have to woo some Republicans if any in their party break ranks.

Joe Manchin, a Democratic senator of the party’s moderate wing, already has made comments in US media indicating he is hesitant to support $2,000 checks.

That would be an early test for Biden, who promised more relief to Georgia voters who gave two crucial Senate seats to Democrats in a runoff election last week.

The package Biden is expected to propose could amount to trillions of dollars in spending, but Michael Feroli of JP Morgan predicted Congress could pare it down to the $900 billion range, matching the measure approved last month.

Nonetheless, that amount would help boost GDP growth this year to 5.3 percent and in 2022 to 2.6 percent, a “remarkable expected turnaround” aided also by negligible inflation and the Federal Reserve’s maintenance of low borrowing rates.

Read Next
‘For transparency:’ Senators to ask for prices of vaccines being bought by PH
EDITORS' PICK
PNP’s Covid-19 cases jump to 9,809; 52 new infections logged
Pope Francis to miss events due to new flare up of leg pain—Vatican
New Year, New Rediscoveries
More than 150 National Guard in Washington for Biden inauguration test positive for coronavirus
Is your company a growth champion? Stand up and be recognized!
Acer Philippines welcomes you to its first flagship store
MOST READ
AFP to apologize to UP alum falsely included in list of NPA members — Lorenzana
Dustin Poirier knocks out Conor McGregor at UFC 257
Former US envoy to PH Sung Kim appointed to State Department
Ellen DeGeneres, too, is baffled by viral Filipino soda ad
Don't miss out on the latest news and information.