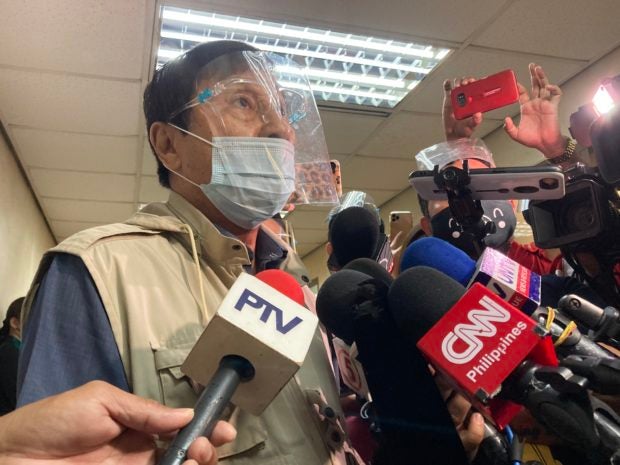 Christine Dacera’s family lawyer Brick Reyes is being interviewd by mediamen at the Makati City Hall during the sidelines of the case’s preliminary investigation. Philippine Daily Inquirer photo / Dexter Cabalza

MANILA, Philippines — There are still “loose ends” in the circumstances surrounding the death of flight attendant Christine Dacera as her family revealed more respondents in the case, the victim’s lawyer said Wednesday.

“Now, there are many loose ends. There are additional respondents. I believed they are from Room 2207. We have not identified tenants there. So I think the police will identify more persons involved in this incident,” Reyes, said partly in Filipino, at the sidelines of the preliminary investigation for Dacera’s case at the Makati City Hall.

Reyes also pointed out that there is an alleged cover-up by the suspects in the death of the flight attendant, noting that they are waiting for the results of the second autopsy to determine if Dacera was drugged.

(The family believed that there is a cover-up and we are waiting for the second autopsy result.)

“Alam ninyo naman iyong unang autopsy, ginawa iyon after embalming so we requested for second autopsy result and hopefully, lalabas yan very soon so we will have more information about the presence, especially of drugs in the body of late Christine Dacera,” the lawyer further said.

(Of course, you would know that the first autopsy was made after the embalming so we requested for the second autopsy and hopefully, it would be released soon so we will have more information about the presence, especially of drugs in the body of late Christine Dacera.)

Moreover, Reyes said the family insisted that Dacera was drugged and was sexually abused.

“Yung pamilya, talagang naniniwala sila na Christine was drugged. Nabigyan ng droga against her will and eventually, she was sexually molested,” he said.

(The family still believes that Christine was drugged. She was given drugs against her will and eventually sexually molested.)

The National Bureau of Investigation (NBI) previously said it has “encouraging leads” after it identified the occupants of Room 2207. Dacera’s friends from 2209 were the respondents in Makati police’s provisional charge of rape with homicide.

The NBI, which is conducting a second autopsy on Dacera’s body, also found urine samples from Dacera’s body even as it was already embalmed.

The Makati City prosecutor’s office preliminary hearing for Dacera’s case was held this Wednesday to determine if there is probable cause to charge suspects for rape with homicide.