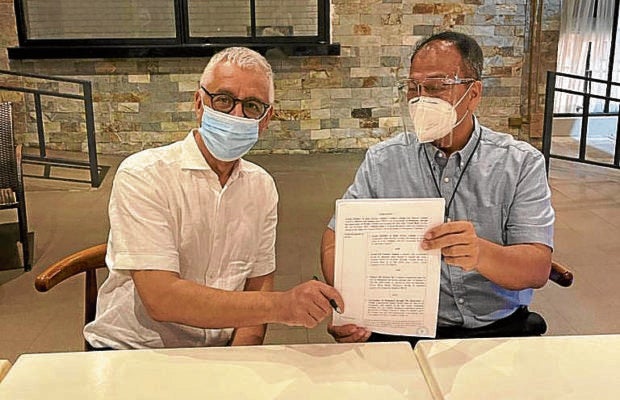 VACCINE FROMINDIA In this picture taken on Saturday, the chief of the government’s vaccine program, Carlito Galvez Jr., and the founder of Faberco Life Sciences Inc. of India, Kishore Hemlani, show the term sheet they have signed for 30 million doses of the COVID-19 vaccine Covovax. The vaccines will be delivered starting the third quarter of this year and will be given to 15 million vulnerable and poor Filipinos. —CONTRIBUTED PHOTO

MANILA, Philippines — Malacañang on Tuesday disputed the senators’ view that the national government is monopolizing the procurement of COVID-19 vaccines, saying local governments can buy vaccines to inoculate their residents and lay out plans for the shots’ distribution.

Several local governments have signed deals to buy vaccines from the British pharmaceutical company AstraZeneca, but as part of a tripartite deal that involves the national government.

“Local governments are able to purchase vaccines, but it has to be through entering a multilateral agreement for the advanced purchase of AstraZeneca,” presidential spokesperson Harry Roque said at a press briefing.

“We are not prohibiting and the national government has no monopoly on the purchase of vaccines,” he added.

According to Roque, a multilateral agreement has to be forged because AstraZeneca is part of COVAX, a World Health Organization pool set up to ensure fair and equitable access to COVID-19 vaccines, and only states are involved in the system.

Local governments and private companies are not part of COVAX, Roque said.

“For purposes of COVAX, there has to be a multilateral agreement because what is involved in the agreement is the Philippines,” he said.

Roque also said the multilateral agreements for the vaccine purchase state that local governments would be the ones to pay for the vaccines they would buy.

They would also pay for the delivery of the vaccines to them and would draw up the plan for the distribution of the shots to their residents, he added.

Roque reiterated that local governments are not required to use their own funds to procure vaccines for their constituents.

“But if they want to spend their own money, the national government would not object because this would help the country. Instead of borrowing money [for the vaccines], these would already be paid for,” he said.

Roque drew criticism from senators on Tuesday for his statement on Monday that Filipinos could not be choosy and should accept the vaccine that the government would make available.

In separate statements, the senators urged Roque to exercise caution in expressing Malacañang’s position in the vaccination program.

“The Filipino people have every right to choose which vaccine to take, it is their money the government is spending to procure the precious doses,” Sen. Grace Poe said.

Poe said she wondered why the government kept insisting on the vaccine made by the Chinese pharmaceutical company Sinovac when this drugmaker had not yet applied here for emergency use authorization of its shot that had a low efficacy rating.

“Questions still linger in the people’s minds as to why the government sealed an agreement with Sinovac when its [vaccine is] not FDA (Food and Drug Administration) approved,” Poe said.

“Why is Sinovac being favored when [its vaccine has only] 50-percent efficacy and [it has] the least transparency? Who are they trying to favor or appease?” she asked.

Sen. Panfilo Lacson said it was unfair for the government to say that Filipinos could not choose their vaccines when the emerging government choice appeared to be suffering from low efficacy.

“It’s bad enough that the national government virtually controls which brand of vaccine to procure. Can’t the people even get to exercise their right to choose what is to be injected into their bodies?” Lacson said.

Roque said that from February to June, Filipinos would have no choice of vaccine because only Sinovac’s vaccine would be available here.

He said 50,000 doses of the vaccine were expected to arrive in February and those would be given to front-line health workers.

“From February to June, there would be no options. If you don’t want Sinovac, you won’t be forced to get it,” Roque said.

But those who would refuse the vaccine available from the government would lose their status as priority recipients and would fall in line for the vaccine like the rest of the population, he added.

Health Undersecretary Maria Rosario Vergeire said Filipinos should accept the first COVID-19 vaccine that the government would make available to them because all of the vaccines to be approved the FDA would be on “equal footing” and considered safe and effective.

“We should accept whatever would be the first vaccine. Let us remember the objective of the government, why we are getting the vaccine to address the situation we are in now,” she said.

“This is our way, one of the strategies which will be most effective to stop the number of [COVID-19] cases from increasing and to protect ourselves,” Vergeire added.

—With a report from Melvin Gascon