N. Korea, China have no respect for human rights: Pompeo 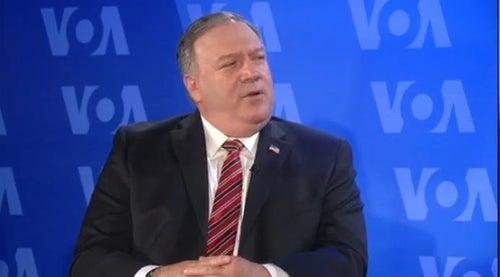 SEOUL — Countries like North Korea and China have no respect for human rights and oppose other universal values such as democracy, US Secretary of State Mike Pompeo said Monday.

“Governments like those in China, Iran, North Korea, they don’t have the respect for the universal dignity of every human being in the way that America does,” the top US diplomat said in a speech at Washington-based Voice of America (VOA).

“Indeed, that is what America was founded upon. Those regimes are anathema to everything that our nation stands for,” he added.

Pompeo insisted the US’ job, as well as that of its state-run media such as VOA, must be to promote American values.

“There are oppressed people all over the globe who still turn to America for hope,” he told the meeting.

“We, we know the government exists to serve people. They, they believe that people exist to serve government,” added Pompeo, referring to the governments of China, Iran and North Korea. “And VOA’s work is vital.”

Pompeo also underscored the importance of consistency in US foreign policy despite changes in leadership.

“It’s an important question,” he said when asked if he expected “some continuity” in US policies toward countries like North Korea and Iran under the new administration.

“Leaders always want to understand that when you make a commitment to them that it will survive,” said Pompeo, who is set to step down soon after President-elect Joe Biden is inaugurated next Wednesday.

Biden has named former Deputy Secretary of State Antony Blinken to replace Pompeo as the top US diplomat. Yonhap