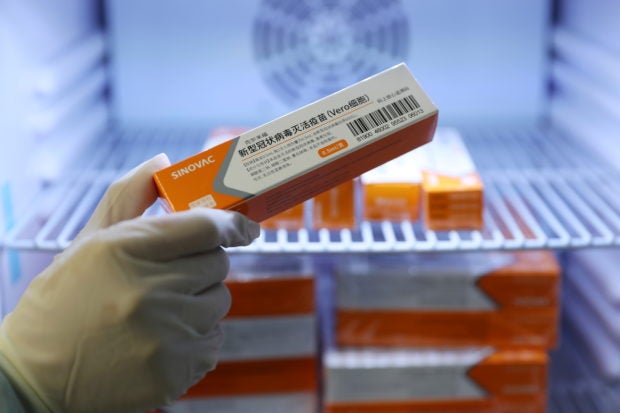 A medical worker takes a box of Sinovac’s vaccine against the coronavirus diseasefrom a refrigerator at a community health centre in Qingdao, Shandong province, China January 5, 2021. (China Daily via Reuters)

SAO PAULO — The coronavirus vaccine developed by China’s Sinovac Biotech showed a general efficacy of less than 60% in its late-stage trial in Brazil, a news website reported on Monday, citing two people who seen the results.

Sao Paulo’s Butantan biomedical center, which partnered with Sinovac to test and produce the vaccine in Brazil, dismissed the report as “purely speculative” as it prepares to release a more complete set of results on Tuesday at 12:45 p.m. (1545 GMT).

Medical experts and regulators criticized what they called an incomplete disclosure of study results last week.

Dimas Covas, director of the Butantan biomedical center, which is running a late-stage trial of the vaccine in Brazil, said ongoing analysis had yielded a new “general efficacy” rate in addition to the “clinical efficacy” announced last week.

On Thursday, Brazilian researchers said the vaccine was shown to be 78% effective against mild cases of COVID-19 and entirely prevented severe cases. But independent specialists called for more transparency on the findings from the Phase III trial of the Sinovac vaccine, known as CoronaVac.

The Philippines has secured 25 million doses of Sinovac vaccine, with the first 50,000 expected to arrive in February.

Brazilian news website UOL reported that the efficacy rate that Butantan was set to announce on Tuesday was between 50% and 60% — above the threshold set by health regulators, but well below the numbers celebrated last week.

Both the Chinese vaccine and a shot developed by Oxford University and British-Swedish firm AstraZeneca Plc have requests for emergency use authorization pending with regulators in Brazil, which has lost more than 200,000 lives to the pandemic – the worst death toll outside the United States.

Piecemeal disclosure of results from global CoronaVac studies have contributed to concerns that vaccines developed by Chinese producers are not subject to the same public scrutiny as U.S. and European alternatives.

In an interview with news website UOL on Monday, Covas said Butantan, which is funded by Sao Paulo state, had prioritized getting its data to Brazilian health regulator Anvisa and was still analyzing the results in parallel.

Covas said the institute would eventually provide its full data to a scientific conference to be announced this week.

Anvisa said on Saturday that a filing from Butantan seeking emergency use authorization for CoronaVac lacked some relevant information for analysis of the study, such as the age, gender and comorbidities of volunteers.

Covas said the federal agency’s handling of the CoronaVac trial had raised questions about its independence, adding to tensions between Sao Paulo officials and the government of President Jair Bolsonaro, who had spurned the Chinese vaccine.

In Manila, Presidential spokesperson Harry Roque claimed that the Philippines is having a hard time procuring western brands of Covid-19 vaccine as rich nations have already secured the majority of future supplies.

Roque was responding to Senator Panfilo Lacson’s question why concerned officials seemed to be “dribbling” or disregarding other vaccine brands and zeroing on buying CoronaVac, Sinovac’s COVID-19 vaccine.

“There’s nothing spectacular about Sinovac other than it’s proven safe and efficient—91.5% (efficacy rate) in at least 3 jurisdictions that we know of,” Roque said.