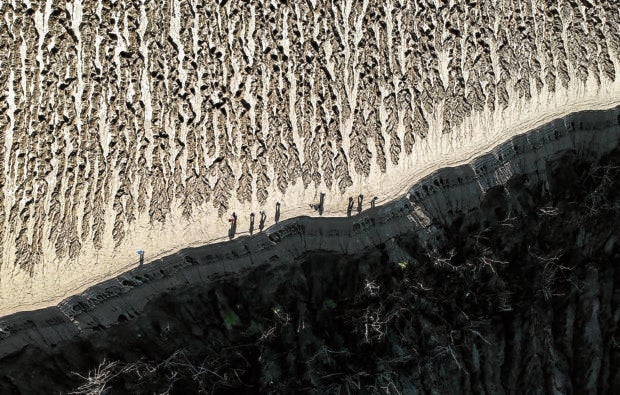 EERIE LANDSCAPE Taal Volcano Island, once home to 8,000 people whose communities depended on tourism and fishing, has been reduced to an eerie landscape after the eruption in January last year. A drone shot shows gullies that have been formed on the volcano’s ash-laden slopes due to rainfall in the area. —GRIG C. MONTEGRANDE

TALISAY, Batangas, Philippines — For residents of Talisay town overlooking Taal Volcano, Jan. 12, 2020, began without a hint of a disaster about to unfold.

On “Pulo,” the name they gave to Taal Volcano Island, caretakers of fish cages went about feeding tilapia. The lake aquaculture industry had sustained 8,000 island dwellers, some of whom were also earning as tour guides or were renting out their horses for visitors heading to the crater view deck.

Joselito Castro, chief emergency responder of the province, was at home in Ibaan town when he received his first phone call around noon from Renato Solidum Jr., the director of the Philippine Institute of Volcanology and Seismology (Phivolcs). Solidum sounded calm but certain of an imminent danger: Taal Volcano was going to blow up.

State volcanologist Paolo Reniva was driving back to the Taal Observatory in Talisay town from his house in Quezon City when the volcanic quakes became too many and too frequent for seismographs to plot, signs of Taal’s first explosive event in 43 years.

“I hurried to the (Phivolcs) command center (at the capital Batangas City) and on my way, the mayor of Balete called. He said people from Barangay Calawit (on the island) had started evacuating. He also said it was raining mud,” Castro said.

Gov. Hermilando Mandanas said the province had been preparing for years for a major eruption of Taal, one of the Philippines’ active and deadliest volcanoes.

Since 2012, the provincial government and nongovernment organizations had already laid out evacuation plans in 10 towns and two cities surrounding the lake and volcano, constantly conducted emergency drills, installed early warning systems, and even acquired sea ambulances and rescue vehicles.

All these and more were put to the test when Taal Volcano roared back to life, shot up steam and ash column as high as 15 km, and spewed ash that drifted north to as far as Bulacan province.

Reniva described the early events as phreatic (steam-driven) before a phreatomagmatic explosion (eruption arising from interaction between water and magma) occurred when the main crater spewed lava at dawn on Jan. 13.

Mario Aurelio, director of the University of the Philippines’ National Institute of Geological Sciences and who was part of a posteruption science expedition last December, said 2-meter thick piles of ash and pyroclastic materials blanketed the island, practically wiping out its vegetation cover.

It was almost the same volume of ash that swamped the mainland towns and took households, like in the towns of Agoncillo, Laurel and San Nicolas, nearly two months to get rid of from roof gutters and front yards.

“It happened too fast there was no time to sound the ‘batingaw’ (bell),” said Reynaldo Mendoza, 65, a Pulo resident and former leader of Sitio (sub-village) Tabla in Talisay. He was referring to the empty acetylene tanks installed in villages by the government years ago as improvised warning bells in case of an eruption.

On the day the volcano erupted, Mendoza came home from the fish cages to his panic-stricken wife Lita and neighbors. The rumblings were growing stronger and louder.

He took them to a fishing boat, and they fled with nothing but the clothes they wore.

Taal’s restiveness continued for days, amid shifting wind direction and threats of a pyroclastic base surge that forced an evacuation of close to a million people within the 14-km circumference danger zone on the mainland.

For days, too, Pulo residents played cat and mouse with authorities in daring attempts to rescue the thousands of horses and livestock they left behind.

“It’s harder for people to leave when they didn’t have the means to do so or any place to go,” recalled Nestor Macatangay, 54, a village councilman at San Teodoro in Agoncillo. He stayed behind to guard his house against looters until the neighborhood’s covered court collapsed under heavy accumulated ash and strong quakes.

A 134-page report that the Batangas government readied for release in time for the first commemoration of the eruption said 117,625 families (434,092 individuals) sought shelter in government evacuation centers (as of Feb. 25, 2020), although the number could be higher as others moved into relatives’ homes in as far as Laguna and Quezon provinces.

The report broke down the cost of damage: P747 million on crops, P900 million on aquaculture, P34 million on livestock, and P97 million on roads and bridges.

Forty-four people, mostly elderly evacuees with heart and lung illnesses, died between Jan. 13 and Feb. 5, 2020, but only one, islander Christopher Deteral, was a direct fatality of the eruption and his body was later recovered under the ash pile on Pulo.

From February to early March 2020, 90 percent of the displaced population on the mainland had returned home. Pulo residents were given housing units at a National Housing Authority site in Ibaan and a local government relocation site in Balete.

Conrad Navidad, national program manager of the United Nations-attached International Organization for Migration, said decampment was “fast,” if not impressive, considering that a health crisis brought about by the coronavirus was just about to take place.

But not everyone was as lucky, like Sarah Jane Aala, 31, who remained with 40 other families at Aya Elementary School in Barangay Aya, Talisay. A former tour guide, Aala, with her newborn and two young children, escaped Taal’s fury on a boat that also ferried her neighbors in Sitio San Isidro.

“My son turned a year old here at the evacuation center. We didn’t have any celebration, but on New Year’s Eve we put on some nice clothes,” she said.

Aala said the remaining evacuees lived off on donated food, clothes and supplies until private donors and governments shifted their attention to the pandemic and victims of other natural calamities.

As months passed, her husband, a former fish cage caretaker, found a job at the construction site of a private hospital nearby.

The local government was preparing a relocation site for the remaining families, but Aala said she was unsure when this would materialize. A church group also came to offer P50,000 worth of construction materials, which she couldn’t avail herself of because she did not own any land.

“I wanted to move on, too, like everyone else, but where?” she asked.