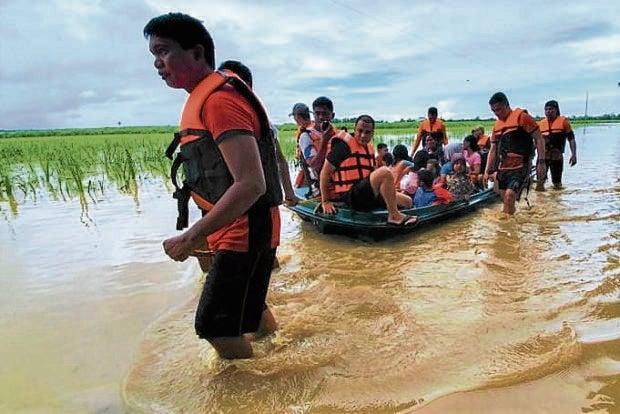 RESCUE Personnel from the Philippine Coast Guard rescue residents from their flooded homes in Negros Occidental on Saturday. —PHOTO COURTESY OF THE PHILIPPINE COAST GUARD

BACOLOD CITY – Two men died while at least 16,323 families, consisting of 81,615 individuals, were evacuated as flood waters rose in some areas in the Visayas due to non-stop rains spawned by the tail of the frontal system last Friday and Saturday.

Many of the evacuees returned to their respective homes on Sunday but those who lost their houses because of the flood remained at the evacuation centers or with their relatives. The flood destroyed 62 houses and damaged 404 others in the province.

Negros Occidental Gov. Eugenio Jose Lacson stressed the need for a serious maintenance work on waterways to mitigate flooding, noting that many water tributaries have been covered with concrete structures.

“In all our efforts towards progress, we must demonstrate that economic growth and protection of the environment can go together and not be in conflict with each other,” he said.

“This is another wake up call for everyone to adhere to proper waste disposal, otherwise, this flooding will happen repeatedly,” he said.

On New Yea’s day, the cities of Silay, Victorias and Talisay were among the localities in Negros Occidental that were hit by severe flooding due to incessant heavy rains and high tide.

A number of areas in Tacloban City, the regional capital, were severely flooded. A chapel located at the top of a hill at the Regina Heights Subdivision in Barangay 91 of the city also collapsed due to the continued rain.

In Biliran province, Gov. Rogelio Espina also suspended work at the provincial capitol due to the flood spawned by heavy rain.

In the town of Caibiran, also in Biliran, classes and work were suspended by Mayor Rhodessa Delantar to avoid any untoward incidents.

Flooding and landslides were also reported in the provinces of Samar, Eastern Samar, and Northern Samar with the level of water reaching up to four meters.

In the town of Arteche, Eastern Samar, 1,102 families consisting of 4,534 individuals from its nine coastal villages were evacuated to safer grounds due to the flood, Mayor Roland Boei Evardone said.

In the town of Catarman, Northern Samar, 21 families composed of 94 individuals from the villages of Yakal, Baybay, and Dalakit were also brought to the evacuation centers. INQ