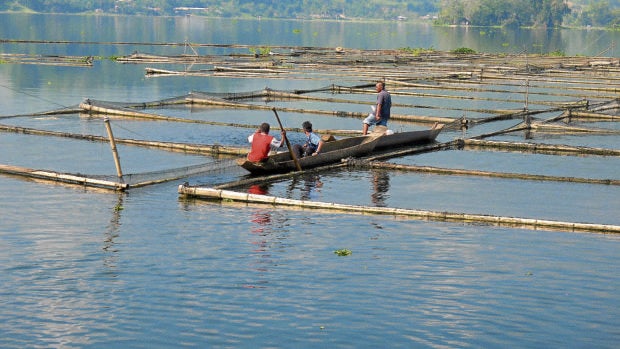 FISH CAGES Workers tend to tilapia fish cages in Lake Sebu, located in the town of the same name in South Cotabato. The town is now experiencing an oversupply of the fish as cage owners harvest them early, as a fish kill hit the aqua farms. —BONG S. SARMIENTO

Rudy Muyco, the lake warden, said the fish kill worsened over the weekend after a gradual start late last year. It ravaged about half of the tilapia cages, he said.
“Assorted sizes of fish, including fingerlings, turned belly up,” Muyco said.

Due to the emergency harvests, wet markets in the region were swamped with fresh tilapia stocks, which, Muyco said, were still safe to eat.

Fish cages occupy 16 percent, or 57 hectares, of the 354-ha Lake Sebu, the biggest lake in the town and namesake.

Often occurring during the wet season, kamahong triggers the rise of sulfuric acid that eventually lowers the dissolved oxygen in the water of the lake.

The mayor said that as far as he could remember, it had been recurring in Lake Sebu that residents already considered it “normal.” The town suffered its worst fish kill in 2017, with losses reaching over P100 million involving at least 1 million kilos of tilapia, Muyco recalled.

“There are still good tilapia stocks for the market, but there have been no buyers…,” Muyco said.

Local farm-gate prices of tilapia remained at P110 per kilogram while market prices ranged from P130 to P150.Gandam ordered concerned municipal offices to extend assistance to the fish cage owners.

As of Sunday noon, municipal workers were still tabulating the volume of tilapia and the number of fish cage operators affected by the fish kill in the villages of Poblacion, Takunel and Bacdulong.

Muyco said the town was considering the declaration of a state of calamity to help fish cage operators recover from their losses.

Personnel from the Bureau of Fisheries and Aquatic Resources arrived in town on Saturday to take water samples and conduct water analysis. INQ