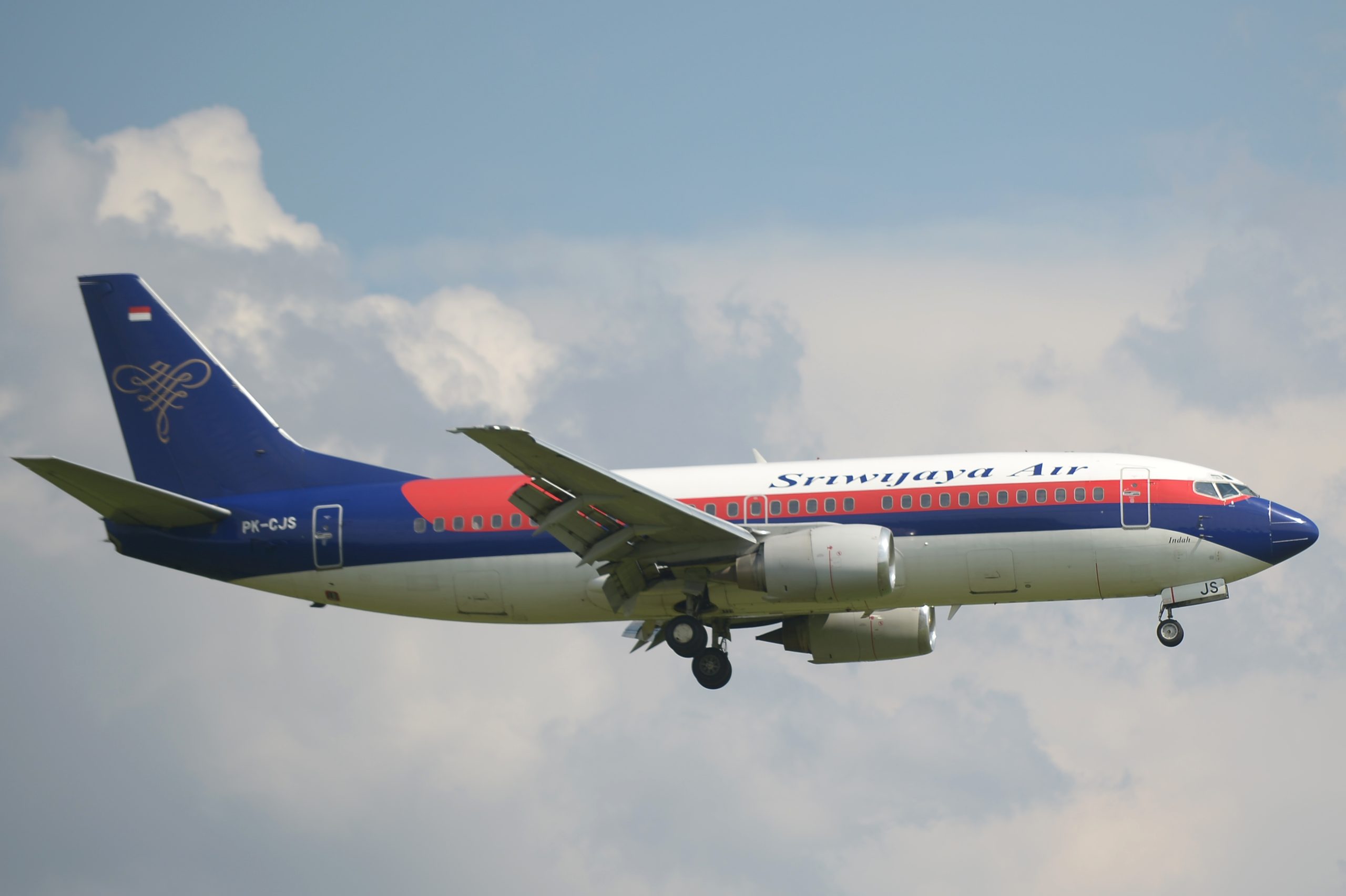 This file photo taken over Tangerang on March 18, 2013 shows a Sriwijaya Air Boeing 737-300 aircraft, a similar model to the Indonesian airline’s Boeing 737-500 operating as flight SJY182 that lost contact during a flight from Jakarta to Pontianak on January 9, 2021. – Indonesia’s Sriwijaya Air lost contact with one of its passenger-jet planes shortly after take-off from the capital Jakarta, the country’s transportation ministry said on January 9, 2021. Photo by Adek BERRY / AFP

JAKARTA — The crash of a Sriwijaya Air Boeing 737-500 about four minutes after it took off from Jakarta Saturday is the latest in a series of air accidents to rock Indonesia.

The Southeast Asian archipelago relies heavily on air transport to connect its thousands of islands but has suffered a string of deadly plane crashes in recent years.

The aviation sector is expanding fast as its economy booms but there are concerns airlines are struggling to find enough well-trained personnel to keep up with the rapid growth.

Once banned from European airspace over safety fears, the EU removed all Indonesian airlines from its safety blacklist in 2018 following improvements.

Here are the worst aviation disasters in the nation’s history:

– Lion Air -A Boeing 737 MAX 8 from budget airline Lion Air crashes off the coast of Indonesia in October 2018, killing 189 passengers and crew members.

Investigators cite problems with the plane’s anti-stall system as one of the contributing factors.

– Java Sea -In 2014, an AirAsia plane plunged into the Java Sea during stormy weather, killing 162 people. The plane was flying from the Indonesian city of Surabaya to Singapore.

– Medan disaster -A Mandala Airlines domestic flight crashed shortly after take-off in 2005 into a densely populated suburb in Medan, a city of two million on the island of Sumatra, killing at least 150 including passengers, crew and people on the ground.

In June 2015 an Indonesian military plane crashed shortly after takeoff, also coming down in a residential area in Medan, killing around 122 people on board, many of them servicemen and women and their families. Around 20 people were also killed on the ground and several housing blocks torn apart.

– Air Force fire -In 1991, an Air Force plane crashed in East Jakarta minutes after take off when an engine caught fire, killing 135 people according to reports. Those who died included 121 airmen, 12 crew and two people on the ground. One passenger survived.

– River crash -In 1997, a Silk Air flight crashed into a river near the Indonesian city of Palembang while on its way to Singapore from Jakarta. All 104 passengers and crew were killed in what was investigated as a possible pilot murder-suicide.

– New Year’s Day crash -An Adam Air plane plunged into the sea off Sulawesi island on New Year’s Day 2007, killing all 102 people on board. The airline was later banned from flying. Indonesian authorities said the pilots lost control after becoming preoccupied with malfunctioning navigational equipment.