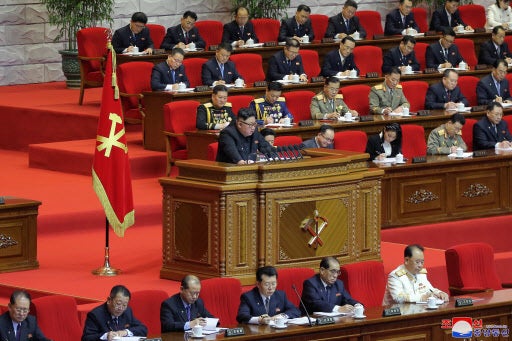 North Korean leader Kim Jong-un speaks during the fourth day of the eighth congress of the ruling Workers’ Party in Pyongyang on Thursday. KCNA-Yonhap via The Korea Herald/Asia News Network

Kim added that Washington‘s policy against Pyongyang won’t change regardless of who rules the White House, saying that an end to its hostile stance will be the key to future relations between the two countries, according to the Korean Central News Agency.

Kim made the remarks reporting to the eighth congress of the ruling Workers‘ Party currently under way in Pyongyang, the first reference to transition of power in Washington since Joe Biden’s election as US president in November. They also came days before Biden‘s inauguration slated for Jan. 20.

“The report said that the key to the establishment of new North Korea-US relations is the withdrawal of the US’ hostile North Korea policy,” KCNA said, declaring an “eye for an eye” principle against Washington.

“Our external political activities going forward should be focused on suppressing and subduing the US, the basic obstacle, biggest enemy against our revolutionary development,” it added.

Kim has held three meetings with US President Donald Trump, but denuclearization talks have made little progress since their no-deal summit in Hanoi in 2019.

Referring to the summits, Kim said the US hostile policy has “worsened” despite the North‘s “efforts” and “maximum patience” to reduce tensions in the region.

Kim rolled out a series of goals to boost its military power, calling on improvement in missiles’ strike capabilities targeting objects in the range of 15,000 kilometers and minimization of nuclear weapons, among others.

The North also said it has completed the research design of a new nuclear submarine and that it is in the final screening process.

“The reality shows that we need to strengthen the national defense capabilities without a moment of hesitation to deter the United States‘ nuclear threats and to bring peace and prosperity on the Korean Peninsula,” KCNA said.

“(Kim) called for an unrelenting pursuit of building nuclear power for the safety of our people, the fate of our revolution and the existence and self-reliant development of the country,” it said.

On South Korea, Kim appeared to have left room for improvement in relations, saying the relations could return to three years ago when a peace mood was created “at any time,” but emphasized that all depends on South Korea’s attitude.

Inter-Korean relations have remained stalled since the Hanoi summit as sanctions stand in the way of cross-border exchanges and cooperation.

The ties chilled further last year, as North Korea blew up an inter-Korean joint liaison office in anger over anti-Pyongyang leafleting in June and killed a South Korean fisheries official drifting near its western sea border in September.

North Korea has not responded to Seoul‘s offers for talks and cooperative projects, while focusing on warding off an outbreak of the coronavirus on its soil by sealing its border and toughening quarantine measures. Yonhap