Diary of a COVID-19 patient: Baguio doctor chronicles her struggle 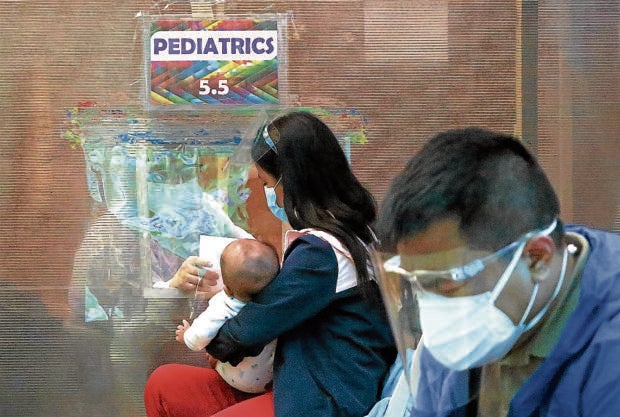 DAILY RISK Baguio City’s doctors, nurses and other medical front-liners face the risk of infection every day as they continue to attend to and treat residents suffering from different ailments, including COVID-19.—EV ESPIRITU

BAGUIO CITY—Dr. Elizabeth Macliing-Solang closed her obstetrics and gynecology clinic in March last year when Luzon went into a lockdown and started a diary about life in the mountain city during the COVID-19 pandemic.

More than just an account of the health crisis that has kept most people indoors and the anxieties many suffered, her “Diary of a COVID-19 Patient” provides details on the first health-care measures taken by her colleagues who have yet to understand the nature of the new coronavirus.

Solang, a daughter of the late activist “Mother Petra” Chag­yowen Macliing, tested positive for the virus two days after her 61st birthday on April 24.

The lockdown had not sidelined her. Solang continued to see patients as a visiting consultant of four hospitals, including Baguio General Hospital and Medical Center (BGHMC), the central treatment hub for COVID-19.

“It was probably during those times that I got the virus, despite my wearing a face mask. Face shields were not imposed yet then,” Solang said.

Like other health workers nationwide, me­dical front-­liners in Ba­guio were then dealing with a short supply of personal protective equipment so Solang helped out.

“Most doctors were making face shields from acetate and yoga mats, and sourcing local materials and local tailors to make wraparounds and bunny suits,” she said. 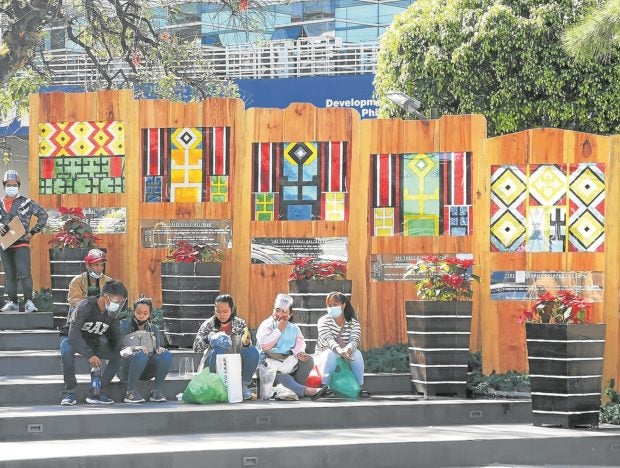 LIVING WITH VIRUS Baguio residents, equipped with masks and face shields, have learned to live with COVID-19 throughout 2020. The tourism-dependent economy of the summer capital re-opened in the latter part of last year as the government awaits the arrival of vaccines.—EV ESPIRITU

What struck Solang most during her confinement at BGHMC was the infrastructure.

“The building [where I was isolated] was newly built, apparently rushed for the pandemic. It smelled of fresh paint, but the paint was chipping off in parts of the room [which was] literally and figuratively cold,” she said.

The room was air-conditioned but almost bare. “My suitcase served as a cabinet for my clothes. The toilet seat was located very close to the faucet,” Solang said, adding:

“Because towel rods had not been installed, I placed my clothes and towel on the Monobloc chair just outside the toilet door and reached out for these after my bath. The toilet floor was not tiled and the drain was not quite lower than the floor so I had to keep sweeping the water toward the drain with my slippers after each bath.”

Nurses and doctors met patients only during scheduled rounds. Solang kept tabs on her health using a set of cardiac monitors in the room.

“There was no direct communication to the nurses’ station—no [closed-circuit television cameras] or intercom. When I was confined, the nurses gave me the cell phone number of the nurses’ station and I was instructed to report to them if I needed something. Rounds were done three times a day,” Solang said.

She also wondered where the disposable hazard gear worn by front-liners would end up. 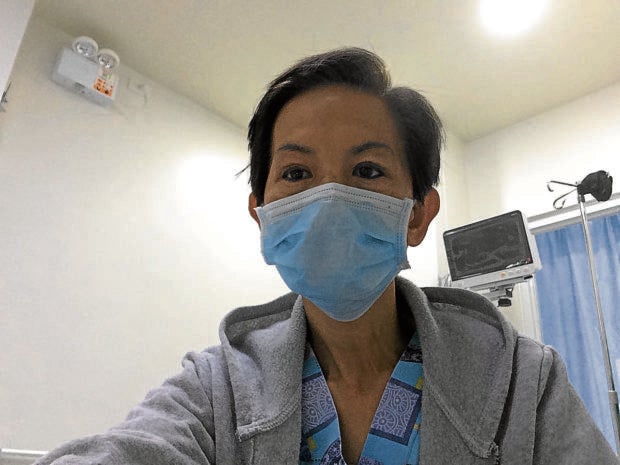 Solang’s diary also focuses on the plight of underpaid health workers like nursing attendants, sanitation personnel, and X-ray and lab technicians who continued working despite the risk of exposure to the virus.

Solang said that given its role as the primary health-care unit in northern Luzon, BGHMC should hire hospital engineers, architects and planners.

She also described how her 16-day confinement impacted her mental health: “I thought I was strong, independent and prepared to go through the approved protocol of COVID-19 patients at that time. I had anxiety and acute panic attacks. I was glad I recognized these early on and teleconsulted with a psychiatrist. I was placed on antidepressants.”

Solang’s husband Ben was an activist who died of a massive heart attack on the anniversary of the First Quarter Storm at Bulwagan ng Mga Bayani on Jan. 26, 2018. He was attending the launch of the book “Of Tyrants and Martyrs” and fell unconscious right after delivering his speech, she said. 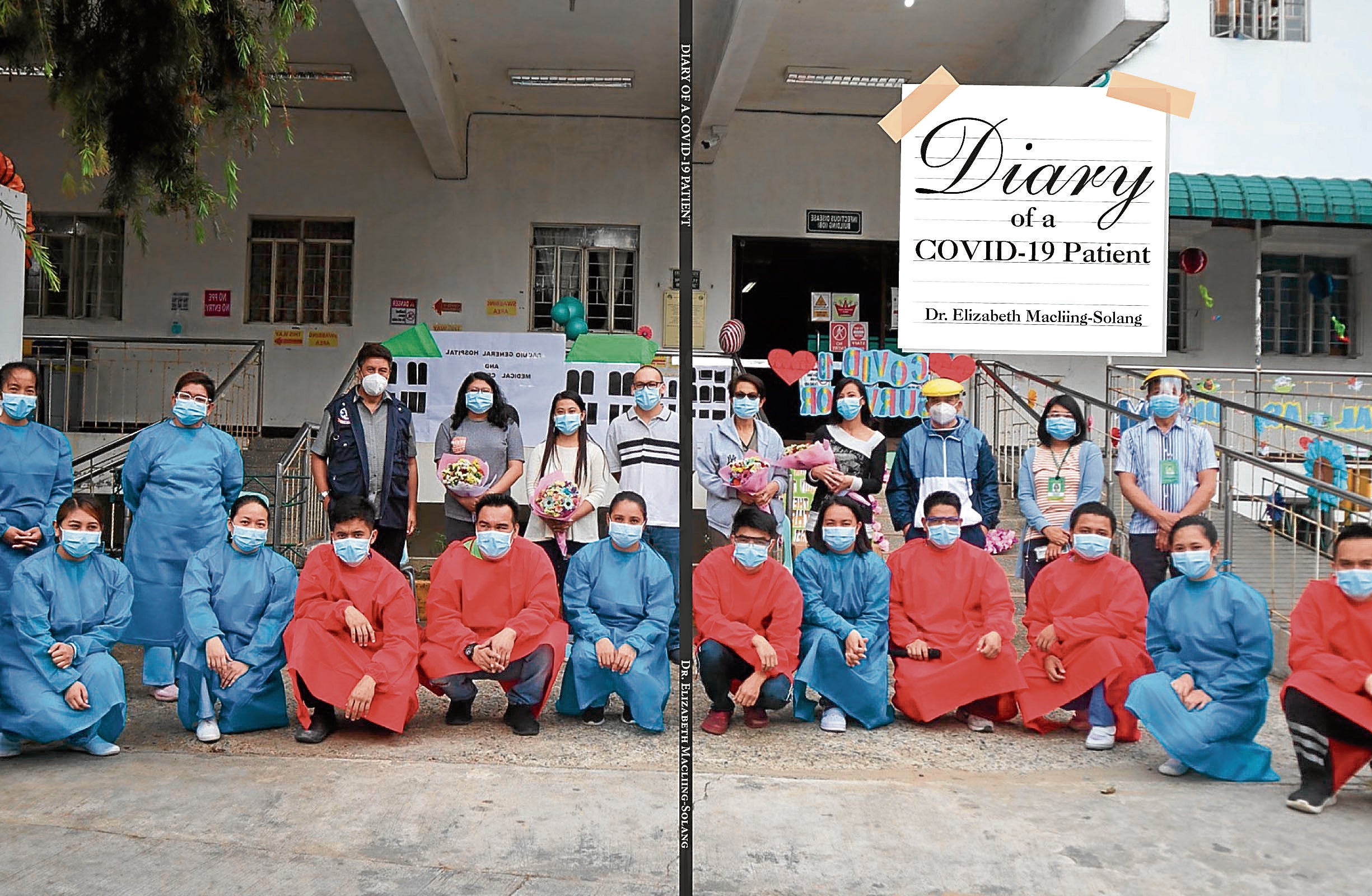 PERSONAL ACCOUNT Dr. Elizabeth Macliing-Solang, a coronavirus survivor, says her “Diary of a COVID-19 patient” gives an insight on how a health worker confronted a once mysterious disease.—BOOK COVER AND PHOTO COURTESY OF THE MACLIING-SOLANG FAMILY

Her youngest, 24-year-old Paolo Kedawen Solang, is an economic casualty of the pandemic, having lost his job as a bartender.

Solang is the sixth child in a brood of eight raised by a woman known for her antimining advocacy.

Petra, her mother, a recipient of the 2009 Laureate Prize for Rural Women, was widowed at the age of 23.

“My father was 20 years her senior,” Solang said. “My youngest sister, Fran [Claver, a Baguio human rights lawyer] was only 3 months old when my father died. I was about 3 and I have vivid memories of my father bringing me out for a walk.”

She remembers playing in the yard when a red pickup truck arrived, carrying her father’s body home from St. Theodore’s Hospital where he died.

“My only brother, Paul, drowned in the mighty Chico River when he was in Grade 5,” Solang said. Her sister Jean died of an aneurysm 10 years ago at 57. Another sister, Flora, died of lung cancer at 56 in June 2016, just a year after her diagnosis.

“Uneducated, my mother went into buying and selling—traveling to Baguio to buy fruits, fish and other goods, then selling them in Bontoc,” Solang said. “I remember she would travel Saturday first trip, then be back on the last trip the following day.”

Petra, whom Solang described as a prominent antidam personality during the Chico River protests, eventually enrolled in short courses when her children were older.