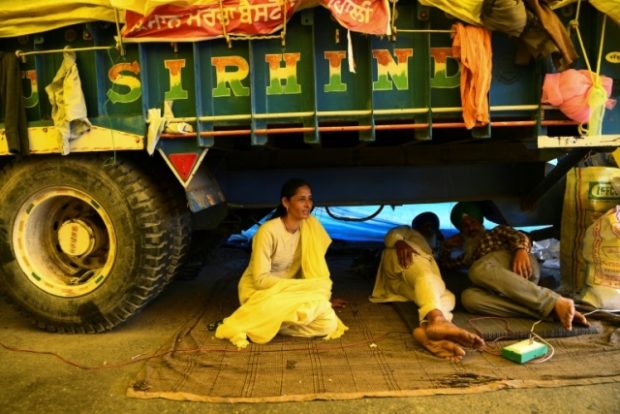 India’s rural landscape is notoriously male-dominated, but thousands of women have become a pillar of the farmer protests blocking roads into New Delhi that have become a huge challenge to the government.

Women of all occupations and ages, from those who tend cattle or toil in the fields, to city professionals and grandmothers in wheelchairs, are braving the freezing winter temperatures in a bid to make the government withdraw market reforms.

“I am fighting for my children and my grandchildren,” said Parminder Kaur, 40, who chants slogans at rallies during the day, then in the evening helps make chapati flatbread and curry to feed the tens of thousands of protesters.

Women have traditionally been the silent backbone of Indian agriculture, working the land without the influence that goes with it. Repeat studies have shown how they suffer from poverty, discrimination and domestic violence.

About 85% of women in rural areas have some kind of agricultural activity, yet only 13% own land, according to anti-poverty activist group Oxfam.

But Kaur was visibly proud at the way women were “walking shoulder-to-shoulder” with men to defend rural welfare.

Prime Minister Narendra Modi has been forced onto the back foot over three laws which allow farmers to sell their produce on the free market, after decades of channelling their wheat and rice through state-run markets with a guaranteed minimum price.

Modi insists the reforms will attract badly needed investment to a sector which employs about two-thirds of India’s 1.3 billion population, but only contributes about 15% to its economy.

However, farmer leaders say the changes will lead to a takeover of the agriculture business by Indian conglomerates.

Kaur’s family has two acres (about 8,000 square meters) of land where they grow wheat.

“This land is everything for us, it is like our mother,” she said. “They want to snatch our mother away from us, how can we allow this?”

Ranjana Kumari, who heads the Centre for Social Research, a Delhi-based non-profit group, said that while women do not own the land, they fear a cut in revenue will badly hit their households.

“When the family income falls, it affects women’s health and wellbeing the most. Less income also means more tension and violence at the hands of men. That is why they are angry and vocal about these laws.”

The women’s active participation in the protests has been appreciated by the leaders.

Rana Bhatti, who is from a farming family in Haryana state, said the protests were a way for women to show their strength.

“I feel the time has come for us to take to the front lines and steer the challenge against this arrogant government,” said Bhatti as she led a group of women holding flags and placards. One read: “No farmers, no food, no future.”

Kumari said that women are more politically aware than ever before, a trend that Modi’s Bharatiya Janata Party has seized upon and credited with helping it to two landslide election wins.

“Looking at the way the women are joining these protests, it makes a statement about their aspirations and the need to be heard. They are saying we won’t take things lying down.”

The farmers’ cause has drawn an urban contingent of female supporters too.

Dressed casually in jeans and a shawl, Jassi Sangha, 33, is an artist and filmmaker who has been at the protest since it started.

She helps bring out a bi-weekly newspaper for the farmers and organizes education for children in the camp.

Sangha said she was drawn by the protest as soon as she heard about it: “I left my work and came, we have to fight or we are done.”

The farmers’ rudimentary camps have been blocking key highways since Nov. 26, 2020, and the government has appealed to the protesters to send women, children and the elderly back home, as India endures one of the coldest winters in three decades.

But Kaur, who has two children, said she is staying “for the long haul.”

“At least we can proudly tell future generations that we raised our voice,” she said. CC