PARIS–World leaders and governments on Wednesday expressed shock and outrage at the storming of the US Capitol in Washington by supporters of President Donald Trump.

British Prime Minister Boris Johnson on Twitter condemned the “disgraceful scenes in U.S. Congress. The United States stands for democracy around the world and it is now vital that there should be a peaceful and orderly transfer of power.”

British Foreign Secretary Dominic Raab added in his own tweet: “The US rightly takes great pride in its democracy, and there can be no justification for these violent attempts to frustrate the lawful and proper transition of power.”

The EU’s foreign policy chief condemned an “assault on US democracy.”

“In the eyes of the world, American democracy tonight appears under siege,” Josep Borrell tweeted.

Calling the action an “assault on US democracy, its institutions and the rule of law,” he added “This is not America. The election results of 3 November must be fully respected.” 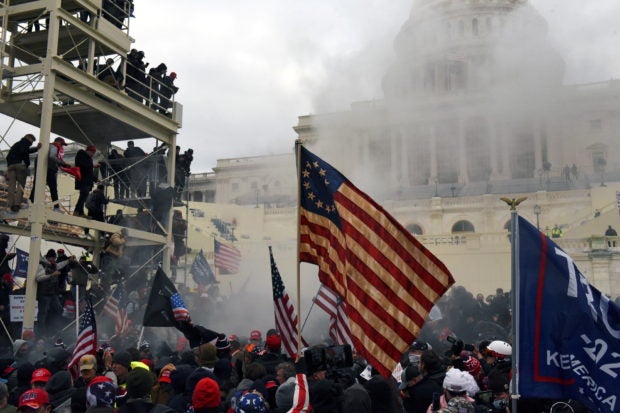 “The violence against American institutions are a serious attack on democracy. I condemn it,” Le Drian tweeted. “The will and the votes of the American people must be respected.”

“Trump and his supporters should finally accept the decision of American voters and stop trampling on democracy,” Maas tweeted.

“The enemies of democracy will be pleased to see these incredible images from Washington DC,” he added. “Inflammatory words turn into violent actions.” 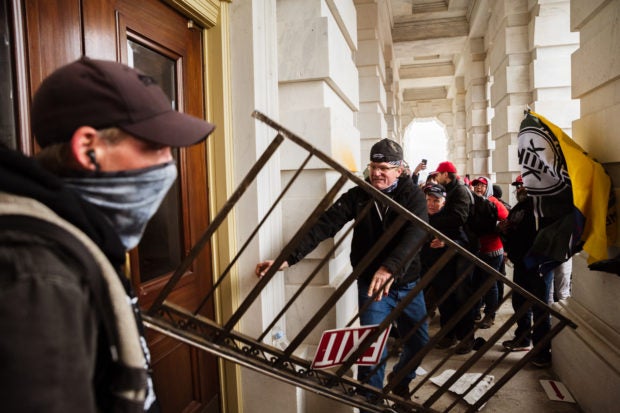 A member of a pro-Trump mob bashes an entrance of the Capitol Building in an attempt to gain access. (AFP)

“The outcome of this democratic election must be respected,” he said.

The plain-speaking Rutte once during a visit to the White House in 2018 interrupted Trump with a loud ‘no’ when Trump made an assertion about EU-US trade.

Irish premier Micheal Martin, who has invited the Irish-American Biden to visit his ancestral homeland early in his presidency, tweeted his condemnation.

“The Irish people have a deep connection with the United States of America, built up over many generations. I know that many, like me, will be watching the scenes unfolding in Washington DC with great concern and dismay,” Martin said.

“Shocking & deeply sad scenes in Washington DC — we must call this out for what it is: a deliberate assault on Democracy by a sitting President & his supporters, attempting to overturn a free & fair election!” he tweeted.

“The world is watching! We hope for restoration of calm.” 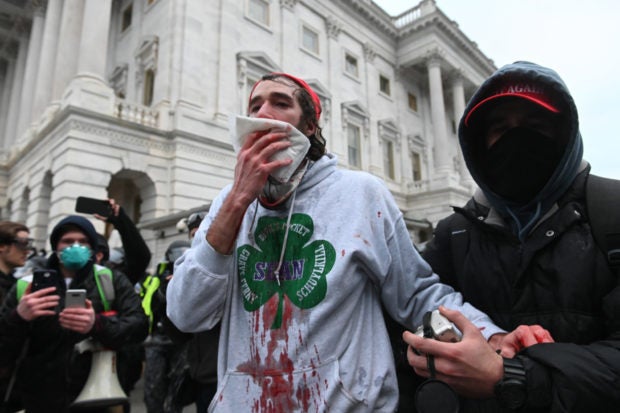 A supporter of  Trump gets help as he bleeds after being hit in the face with a projectile while he and other protestors were evacuated by riot police from the Capitol building . (AFP)

“Extremely troubled by the violence and horrible events taking place in Washington D.C. American democracy is resilient, deeply rooted and will overcome this crisis,” Greek Prime Minister Kyriakos Mitsotakis said in a tweet.

“We are following with concern the internal developments happening in the US,” the Turkish foreign ministry said in a statement.

“We call on all parties in the US to maintain restrain and prudence. We believe the US will overcome this internal political crisis in a mature manner.” 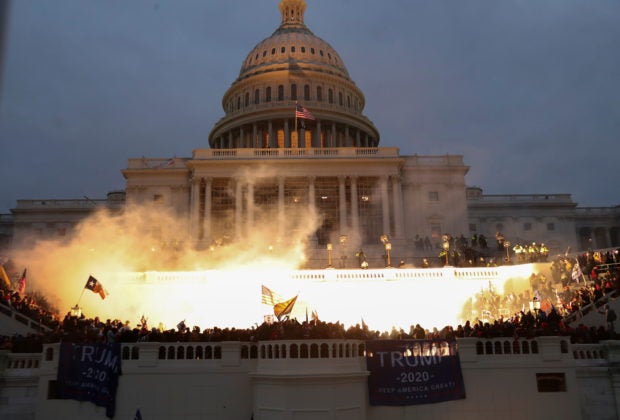 An explosion caused by a police munition is seen while supporters of President Donald Trump gather in front of the U.S. Capitol Building. (Reuters)

“This is an unacceptable assault on democracy. A peaceful and orderly transfer of power must be ensured,” said Austrian Chancellor Sebastian Kurz on Twitter.

Czech Foreign Minister Tomas Petricek said in a tweet: “The looting and violence at the US Senate are not a good example for countries where democracy is fighting hard for a place in the sun. Given the emotions sparked by the US presidential election, we could expect today’s session to be far from ordinary. Where were the police and the Senate bodyguards…?”

“Extremism, violence, polarization and violence is never the way forward. Terrible pictures from Washington. May democracy be brought back to working again,” Denmark’s Prime Minister Mette Frederiksen said on Facebook. 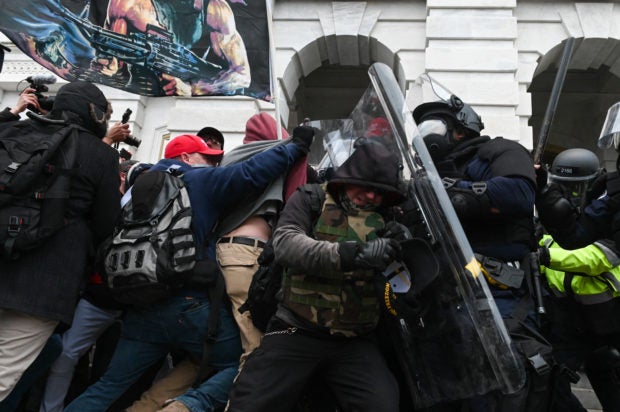 Riot police push back a crowd of supporters of President Trump after they stormed the Capitol building. (AFP)