3 suspects in Dacera death freed amid cries for justice 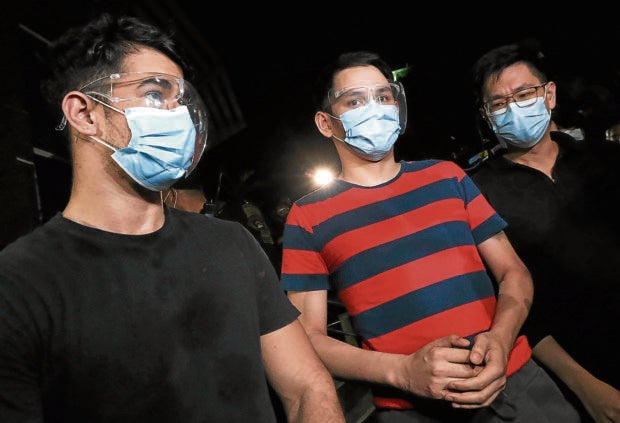 RELEASED FROM DETENTION (From left) John Pascual de la Serna III, Rommel Galido and John Paul Halili, who were arrested in connection with the death of 23-year-old flight attendant Christine Angelica Dacera in a Makati City hotel on Jan. 1, are released from police detention after government prosecutors found “insufficient” evidence against them. —LYN RILLON

MANILA, Philippines — State prosecutors on Wednesday ordered the release of three men held for the death of a 23-year-old flight attendant, saying the evidence presented by police investigators was “insufficient” to show that she was raped and killed after attending a New Year’s Eve party in a Makati City hotel.

Instead of recommending their outright criminal indictment, the Makati City Prosecutor’s Office opted to start a regular preliminary investigation of the case on Jan. 13 to determine the alleged role of the suspects being linked to the death of Christine Angelica Dacera, which the police had quickly declared “solved.”

The office of the city prosecutor ordered the release of John Pascual de la Serna III, Rommel Galido and John Paul Halili, who had been in police custody since their arrest on Jan. 1. Eight others were named respondents in the complaint filed by Dacera’s mother, Sharon Rose Faba Dacera.

Contrary to the claim of the Philippine National Police, which announced Dacera’s death as a “rape-slay” incident, the Makati prosecutors said it was still uncertain if she was really sexually abused before she was found unconscious in the bathtub of her rented room in City Garden Grand Hotel.

“After a thorough examination of the evidence presented on inquest, this office finds that there are certain matters that need to be clarified to determine the participation and culpability of each respondent for the alleged rape and killing of … Dacera,” the prosecutors said in a three-page resolution.

“At this point, the pieces of evidence so far submitted are insufficient to establish that she was sexually assaulted or raped. And if sexual assault/rape was committed, who is/are the person/s responsible?” they added.

The Makati police released De la Serna, Galido and Halili around 7 p.m. on Wednesday, after receiving a copy of the resolution.

The three suspects maintained their innocence.

“It bears stressing that the police officers have yet to submit the results of the DNA analysis, toxicology/chemical analysis and histopath examination. Hence, a conduct of preliminary investigation is necessary,” they said.

The prosecutors noted that Dacera was last seen alive in a security footage on the 22nd floor of the hotel at 6:23 a.m. of Jan. 1, or about six hours before some of her companions found her unconscious inside the bathroom of Room 2209.

Dacera died while being brought to Makati Medical Center.

The family is seeking a second, independent autopsy as speculations on what happened to her abound on social media.

On Wednesday, the PNP chief, Gen. Debold Sinas, insisted that Dacera was a rape-slay victim, citing medical findings, and that the case was already solved.

“In our policy, the case is solved with the arrest of one of the suspects and the filing of a case in court,” he said.

The Makati police filed a complaint of rape with homicide before the city prosecutor and later submitted other documentary evidence, including the medicolegal report.

Dacera’s family disputed the results of the official autopsy conducted by the Southern Police District Crime Laboratory Office (SPD-CLO), which indicated that Dacera died of a natural cause, specifically ruptured aortic aneurysm. That report was signed by Police Maj. Michael Nick Sarmiento, the SPD-CLO medicolegal officer.

Dr. Raquel Fortun, a forensic pathologist, said the police autopsy report was “inconclusive” and “there’s not enough evidence to make a conclusion” that Dacera was raped.

If the report alone would be the basis, she said the genital examination conducted would mean that “there is no evidence that there was [sexual assault],” she said in an interview with broadcast journalist Raffy Tulfo in his YouTube program “Raffy Tulfo in Action” on Wednesday.

Fortun found “unusual” the conclusion of the SPD-CLO that Dacera died of ruptured aortic aneurysm.

“This is very unusual for a 23-year-old healthy individual. Aneurysm develops if you have aortic disease, that your arteries become clogged,” she explained.

She noted that the aorta, the body’s largest artery, could not rupture easily but could burst because of trauma when one is stabbed or hit by a gunshot.

“If the aorta is ruptured, the usual cause of death is excessive bleeding. There should be a lot of hemorrhage around the aorta. But that’s not in the report. You cannot connect intoxication with an aneurysm. I am not convinced,” Fortun said.

According to her, a toxicology report would answer more questions of the investigators and the family.

“Pathology would rule out a lot of things [that there is sexual assault]. But toxicology can put a finger on what did she drink, what was in it, if there was an interaction and if it was enough to cause death,” she said.

Dacera’s family maintained that she was “very healthy” and that as flight attendant, she was required to keep away from vices as it could be a ground for her termination from work.

“We don’t believe this loose talk of her using drugs and being a drunkard. They’re not true. They are just trying to put her down because she could not speak for herself now that she’s dead,” lawyer Brick Reyes, the family spokesperson, said on Wednesday.

Reyes said the results of the second autopsy would come out “probably by next week.” He did not identify the doctor who would perform the examination or where it would be conducted. The National Bureau of Investigation will assign a forensics team to conduct a second autopsy and provide technical assistance to the PNP, Secretary Menardo Guevarra said on Wednesday.

But Guevarra quickly clarified that the NBI team would not carry out a parallel probe.

Opposition lawmakers on Wednesday slammed the PNP’s “mishandling” of the case.

“It seems the police didn’t rush in gathering forensic evidence,” Bayan Muna Rep. Ferdinand Gaite said in a Twitter post as he called out the police for hastily “publicizing the rape-slay angle.”

“We are all now left confused and speculating, and it doesn’t help that their chief prematurely declared the case as solved even amidst all these questions,” Gaite said.