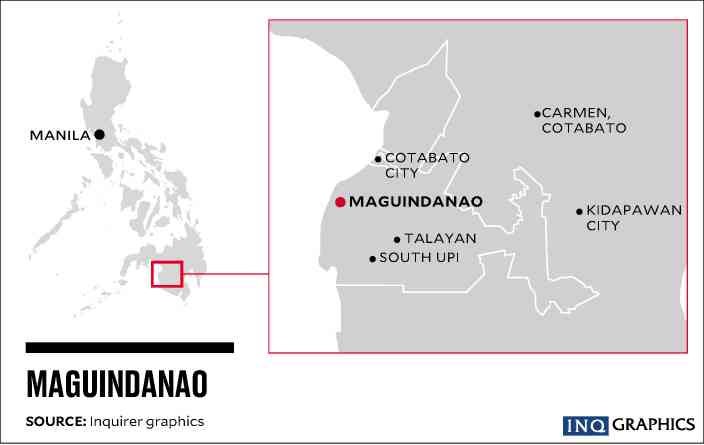 The latest incursion on Dec. 31, 2020, forced almost 600 families to leave their homes and communities in South Upi town. While no one was reported hurt, the armed men burned 13 houses of indigenous peoples (IPs) in the village of Itaw.

Land conflict has been blamed for the violence that mostly displaced members of the Teduray tribe in South Upi.

“The BIFF wanted to grab the ancestral lands of IPs there, especially in Barangay Itaw,” said Lt. Col. Anhouvic Atilano, spokesperson for the Armed Forces of the Philippines (AFP) 6th Infantry Division.

As of Tuesday, at least 1,343 families, or 6,715 people, had been displaced, mostly from South Upi and some from neighboring Talayan town, according to a report from the Ministry of Social Services and Development in the Bangsamoro Autonomous Region in Muslim Mindanao (BARMM) which was obtained by the Inquirer.

The BIFF has been blocking the flow of humanitarian relief items into the villages by harassing disaster relief workers, the military said.

On Sunday, the group ambushed a convoy of relief workers returning from Itaw, killing a certain Thelmo Sasi who had hitched a ride, and injuring three from the municipal disaster risk reduction and management office.

The Army launched air and ground assaults on the BIFF gunmen to rescue the relief workers.

On Wednesday, personnel of the Rapid Emergency Action on Disaster Incidence (Readi) under the BARMM interior ministry was finally able to reach Itaw, with clearance from the Army.

Myrna Jo Henry, the Readi executive assistant for operations, said relief packs were given to 600 families (2,970 people) who were displaced by the New Year’s Eve attack.

The Bangsamoro Information Office (BIO) said the regional government had formed a special task force to look into the problem in South Upi. The group is composed of the ministries of indigenous peoples’ affairs and public order and safety, the Bangsamoro Human Rights Commission and the Bangsamoro Attorney General’s Office.

The regional government is closely coordinating with the South Upi local government, the Philippine National Police and the AFP to secure the areas, the BIO said.