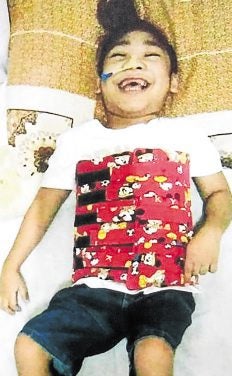 MANILA, Philippines — Just a month after giving birth, Almery Igharas was told by the doctor that her son, born with multiple diseases, could live up to two years only.

But that didn’t make her abandon all hope for Mark Vincent Papa, now 8 years old, who suffers from cerebral palsy spastic quadriplegia (inability to control one’s body), lissencephaly (smooth brain which results in physical and intellectual disabilities) and microcephaly (a head that is smaller than usual).

“Mark has been a miracle baby. He experienced difficulty in breathing a couple of times but he survived and he’s still here with us,” Igharas said. She looks after Mark full-time while her husband works as a welder in Cavite province, earning only P300 to P400 a day.

Because of complications in swallowing due to cerebral palsy, Mark is fed using a nasogastric tube that carries food to his stomach through his nose. His doctor has prescribed a specific brand of milk that costs P18,000 a month.

The doctor has suggested changing his method of feeding to percutaneous endoscopic gastrostomy where, instead of his nose, the tube will pass through his abdominal wall going to his stomach.

Every six months, Mark must also be injected with botulinum toxin to soften his stiffening muscles. Each session costs P105,262.08. Mark also undergoes physical therapy and hydrotherapy every four months at a cost of P14,460.