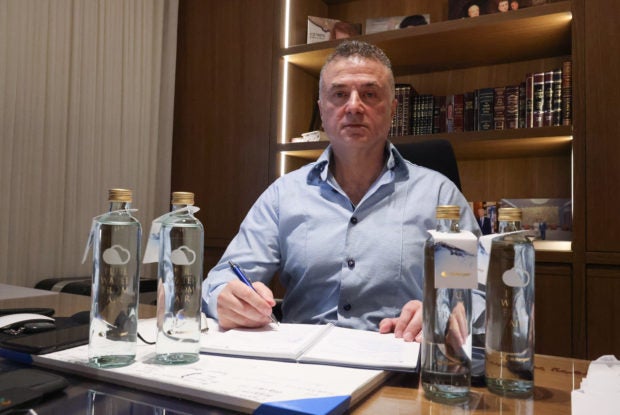 Russian-Israeli businessman Michael Mirilashvili, owner of Watergen, a company that developed a machine which transform air humidity into drinkable water, talks to AFP at his offices in the Israeli city of Petah Tikva, on November 17, 2020. The densely-populated Gaza Strip has long lacked sufficient drinking water, but a new project by Watergreen helps ease the shortage with a solar-powered process to extract potable water straight from the air. Photo by Emmanuel DUNAND / AFP

GAZA CITY — The densely populated Gaza Strip has long lacked sufficient drinking water, but a new project helps ease the shortage with a solar-powered process to extract potable water straight from the air.

Unusually, the project operating in the Islamist-run Palestinian enclave, which has been blockaded by Israel since 2007, is the brainchild of a Russian-Israeli billionaire, Michael Mirilashvili.

The company he heads, Watergen, has developed the atmospheric water generators that can produce 5,000 to 6,000 litres (1,300 to more than 1,500 gallons) of drinking water per day, depending on the air’s humidity.

With just a few machines operating in Gaza, Watergen is far from meeting demand for the two million people who live in the crowded coastal enclave wedged between Israel, Egypt and the Mediterranean Sea.

“But, it’s a start,” said Fathi Sheikh Khalil, an engineer with the Palestinian civil society group Damour, which operates one of the machines because Israeli firms cannot work in Gaza.

The strip, plagued by severe economic woes and regular power shortages, has also been facing a worsening water crisis for years.

Its overused aquifer has been degraded by saltwater intrusion and contaminated by pollutants, making most available water salty and dangerous to drink and forcing the import of bottled water.

Only three percent of Gaza’s own water meets international standards, according to the United Nations, which had in 2012 predicted that ecological pressures would have made Gaza “unlivable” by now.

Multiple studies have linked rising rates of kidney stones and high incidence of diarrhea in Gaza to the consumption of sub-standard water.

Several players are working to solve the water shortage, including the European Union, which is supporting a massive seawater desalination plant.

Watergen’s offices are located in a glass tower in Tel Aviv, some 80 kilometers (50 miles) north of Gaza.

Mirilashvili bought Watergen after moving to Israel in 2009, and the company has since exported its machines to more than 80 countries.

The company CEO and president has a colorful personal history, including time spent in a Russian prison following a kidnapping conviction in a trial the European Court of Justice later found was flawed.

A religious Jew with a picture of a prominent Orthodox rabbi on his office wall, Mirilashvili told AFP that when he learnt about Gaza’s water crisis, he immediately wanted to help.

“Our goal was that everyone on Earth could be supplied with drinkable water… It was immediately clear that we had to help our neighbors first.”

Israel tightly controls imports to Gaza and Mirilashvili acknowledged that getting his machines approved “took some time”.

Israel’s army “liked the idea, but needed to check the equipment,” he said.

Watergen’s technology is suited to Gaza because it runs on solar panels, an asset in the enclave where the one power plant, which requires imported fuel, lacks the capacity to meet demand.

Mirilashvili lamented that he cannot see his machines at work, as Israelis are forbidden from entering the strip.

Watergen has donated two machines, which cost $61,000 each, to Gaza.

A third machine was sent to the strip by the Arava Institute for Environmental Research, based on a kibbutz in southern Israel.

One of the machines, a metal cube that roars as it runs, is located at the town hall in Khan Yunis in southern Gaza.

After capturing humidity, the machine condenses it into water and then filters it into instantly drinkable water.

When the air’s humidity level is above 65 percent, Watergen’s machines can produce about 5,000 liters of drinking water per day, said Khalil of the Palestinian group Damour.

An additional 1,000 liters can be produced when the humidity level exceeds 90 percent.

Some of the water is consumed by city hall employees and some transported to a local hospital for patients with kidney problems, Khalil said.

“One or two machines won’t change anything,” he told AFP. But “it shows there is a solution”.

Asked about working with a company based in Israel, which has fought three wars with Hamas since 2008, Khalil said: “We accept help from anyone who wants to help us.”

Hamas did not immediately respond to a request for comment.

Mirilashvili said he did not believe Gazans see Watergen as a gift from him, an Israeli citizen and observant Jew.

“They understood that this miracle is not from me,” he told AFP.

“This is a present from God. They understood that when God gives you something, you need to accept it.”