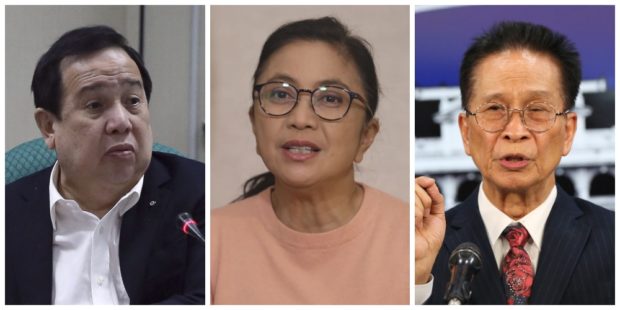 MANILA, Philippines — Who are they protecting?

The commander and troops of the Presidential Security Group (PSG) could just be the fall guys in the smuggling into the country and use of an unauthorized COVID-19 vaccine from China on selected Cabinet officials and presidential guards, Sen. Richard Gordon suggested on Sunday.

The chair of the Senate blue ribbon committee said he did not believe the claim of the PSG commander, Brig. Gen. Jesus Durante III, that the vaccine was procured on his own initiative, adding that Durante’s loyalty to President Duterte, while admirable, should be within the bounds of law.

“No, no, I don’t believe that. General Durante, I don’t believe you. I’m sure you did that out of loyalty, but certainly there are other people who had themselves inoculated [with the unauthorized vaccine],” he said.

“[They were made to take the fall]. That’s my speculation. We should find out who really brought in [the vaccine], because that guy should be prosecuted,” Gordon said in a radio interview.

“Who brought them in? Who were given the vaccines? Who did they talk to? If they’re really Chinese, then the government should determine who brought those Chinese medicines here and treated our people like guinea pigs,” Gordon said.

Gordon said Durante’s loyalty was a “good trait to have” in a PSG chief, but not to the extent of violating the law.

“I wouldn’t want to be in his shoes,” he added.

Whoever ordered and allowed the entry of the unauthorized vaccines from Chinese pharmaceutical company Sinopharm should be held liable for smuggling and reckless use of illegal medicines under the Food and Drug Administration (FDA) Act, according to Gordon.

He said he did not believe Durante could have made the transaction without the backing of “someone powerful.”

Sinopharm, on the other hand, should be fined “at the very least,” he said. “They could also be blacklisted because there was deliberate intent [to circumvent the law].”

Gordon lamented how the illegal acquisition of the Sinopharm vaccine benefited only the privileged and those in power.

“Some are more equal than others. But if some were brought in, they should have been brought in at the same time. I don’t take away their right to be vaccinated, but there’s a right way and a wrong way of doing it,” he said.

Gordon added that those behind the vaccine smuggling could not hide behind good intentions as an excuse.

“Good faith is not enough to defend against a criminal act. They can’t just say, ‘I didn’t mean it, or my intention was good.’ The law is ‘mala prohibita,’ meaning you don’t need intent to be prosecuted, as long as you were caught in possession of a smuggled item or you’re directly in possession of a controlled item,” he said.

Durante disclosed in a TV interview last week that the presidential bodyguards received their first dose in September and the second in October, and that they vaccinated themselves without help from medical professionals.

Without identifying the person who provided the vaccine, the PSG commander claimed it was his own decision to make the request and that he did not ask for permission from Mr. Duterte to have the presidential guards vaccinated.

The President mentioned the PSG vaccinations during a televised meeting with health experts in Malacañang on Dec. 26. He identified the vaccine used as the one developed by Sinopharm.

But according to the FDA, the vaccine has not been registered for local use and distribution.

The FDA, Bureau of Customs and National Bureau of Investigation are looking into the illegal entry and use of the Sinopharm vaccine in the country.

Senate Minority Leader Franklin Drilon last week said Durante would be summoned to an inquiry by the Senate committee of the whole to explain the procurement of the vaccine and the presidential guards’ self-inoculation using the unapproved drug.

On Sunday, chief presidential legal counsel Salvador Panelo defended the PSG, saying the presidential guards should be commended for taking a risk to themselves to protect the President.

“They put their lives on the line to protect the President from being infected with the virus … The PSG’s action, aside from being legally valid, is consistent with—and pursuant to—its duty of securing the life of the President at all cost,” he said in a statement.

Panelo noted that the efficacy of the vaccine used by the PSG was not 100 percent and that the drug had no FDA approval. But being front-liners, he said, the presidential guards put themselves at risk to accomplish their mission.

“Consciously endangering one’s own life is not a crime. Instead of being criticized, these sentinels of the President should be commended for putting their lives on the line to protect the President,” Panelo said.

Countering assertions that the vaccine is not registered with the FDA, he said such statements presupposed commercial transactions for which the presidential guards could not be held liable because they only used the vaccine.

He also said the presidential guards’ actions had not caused any damage or injury to the public or anyone.

But what message do the Filipino people get when high-ranking government officials allow the smuggling and use of an unauthorized vaccine on selected officials and soldiers, Vice President Leni Robredo asked.

Speaking on her Sunday radio program, Robredo said she shared the public’s sentiment that not only did the whole thing violate the law but also showed a double standard in the government.

“The rule is that whether donated or purchased, there are government agencies that need to approve it before it can enter the country,” she said. “We agree that uniformed personnel surrounding the President do need to be prioritized, but why wasn’t protocol followed, why were laws broken?”

The Vice President pointed out that other countries were already rolling out COVID-19 vaccines to their citizens but the Philippines don’t even have vaccines.

“[And yet] some [special people] have already been inoculated [without] following regulations,” she said.

The controversy, she said, has sent the message to the people that smuggling vaccines is “OK as long as you have the means and outside connections.”