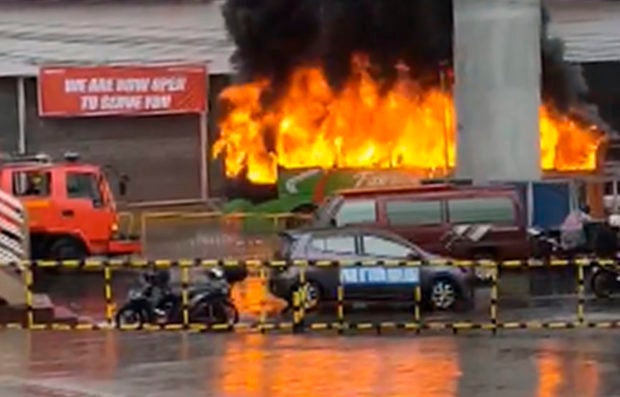 DEADLY TURN An altercation on a passenger bus in Quezon City ends in flames. —SCREENGRAB

MANILA, Philippines — What would have been an ordinary commute in Quezon City took a deadly turn on Sunday afternoon after a bus passenger doused the conductor on the vehicle with gasoline and set her ablaze, killing them both.

The hourlong fire, which also injured four others, reduced the green bus into a blackened metal hulk on Commonwealth Avenue, around the area of Pearl Drive. The flames were contained fast and no other vehicles were affected.

Killed were Amelene Sembana, the bus conductor, and the passenger, a man, who remained unidentified as of press time on Sunday.

Citing witness testimonies, Senior Fire Officer I Robin Topacio said the passenger and Sembana were hitting each other in what appeared to be a scuffle when the passenger suddenly took out a bottle and splashed Sembana with its content, which turned out to be gasoline.

Topacio said it was unclear what they were fighting about but it appeared to be a “personal matter.”

“They really hit each other. The guy was seated in front. They were daring each other and suddenly he put her on fire,” he said.

The plastic barriers inside the bus may have also helped spread the fire, he added.

There were around 20 passengers on the bus. Sembana ran for the door of the vehicle but was overtaken by the other passengers who were also scrambling to leave.

With her burning body blocking the path, the other passengers escaped through the back window as passersby helped them, breaking the glass.

Videos uploaded online showed bystanders throwing rocks at the windows as passengers clambered off them, crying for help.