Manileños sign up for free shots promised by city hall 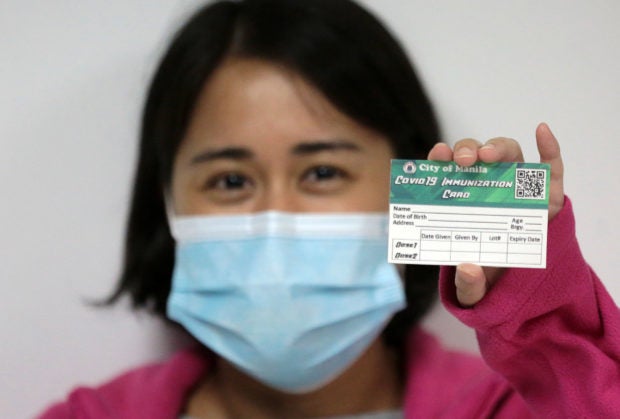 LOCAL INITIATIVE The local government of Manila will issue immunization cards to residents who wish to get free COVID-19 shots to be procured by City Hall. Around 35,000 people have signed up since the online registration opened on Friday. GRIG C. MONTEGRANDE

MANILA, Philippines — More than 30,000 residents of the nation’s capital Manila had listed up for the city government’s promised free vaccines for COVID-19, which Mayor Francisco “Isko Moreno” Domagoso said would be funded with at least P250 million from the city’s 2021 budget.

As of 9 p.m. on Saturday, 35,491 had preregistered on the Manila vaccination program’s online portal, https://manilacovid19vaccine.com, since it opened on Dec. 31.

Most of them were from the Tondo district, and a number were from Santa Cruz and Quiapo.

On his official Facebook page on New Year’s Eve, Domagoso announced the launching of the website where residents could preregister to be inoculated for free.

Domagoso said the Manila government had already signed a nondisclosure agreement with Pfizer and AstraZeneca, two international pharmaceutical companies which had developed vaccines against SARS-CoV-2, the virus that causes COVID-19.

While the two vaccines had been greenlighted for general use in other countries, the local Food and Drug Administration (FDA) has yet to approve or grant an emergency use authorization (EUA) to any candidate vaccine.

“With the help of God, I hope that in the coming days, weeks or months, we will be able to sign an advance marketing commitment contract to acquire and reserve for the initial 400,000 dosages of vaccines for 200,000 residents of Manila,” Domagoso said in his New Year message.

Iloilo City Mayor Jerry Treñas, chair of the vaccine procurement committee of the League of Cities of the Philippines (LCP), told the Inquirer on Saturday that the national government “plans an inoculation rate of 100 percent for HUCs (highly urbanized cities) so we can achieve ‘herd immunity.’”

Cities that can afford to purchase vaccines for their constituents will enter into an agreement with the national government and vaccine suppliers for the procurement of vaccines, he said.

“The national government and local government units will divide the residents targeted for vaccination to ensure all will be inoculated,” Treñas said.

Domagoso informed the Inquirer last month about his plan to inoculate residents of the capital and that the city government was prepared to cancel allotments for road repairs “and other capital outlays of different bureaus and departments which are non-COVID-19 programs” just to fund the program.

“I’m confident people would not mind having potholes on the roads if it means our survival against COVID-19,” he said in an interview before Christmas.

“We have already pooled together P2 billion [that would be taken from] soft projects, including our food security program,” Domagoso said.

The Manila mayor earlier said in an online Inquirer forum that the city government had prepared P1 billion to purchase vaccines.

He said P250 million had already been deposited in a government bank that could be withdrawn anytime should the national government allow local governments to purchase their own vaccines.

The Department of the Interior and Local Government (DILG) had already allowed local governments to procure their own vaccine doses, DILG spokesperson Undersecretary Jonathan Malaya said in a Dec. 26 Laging Handa briefing.

Manila has a population of 2.4 million, he said.

The World Health Organization defines herd immunity as an immunization concept premised on the vaccination of the vast majority of the population, or a certain threshold number, enough to lower the risk of spreading the infection and help protect the more vulnerable members of the community.

To preregister in Manila’s vaccination portal, residents will have to fill out a form, giving their names, birthdays, mobile numbers and home addresses. They must also upload a photo of themselves.

They are asked whether they had contracted COVID-19, or had experienced its symptoms over the past 14 days. They must indicate where they had traveled and disclose their medical history in a form answerable by yes or no.

Once the registration is validated, a one-time PIN (personal identification number) will be sent to them by phone.

The Manila city government, however, has not yet informed those who preregistered when they could be vaccinated. It also provided no other means to list up for people with no internet connection.

The national government’s vaccination program had identified who would be first inoculated.

In the priority group are front-line health workers, workers of select government offices, senior citizens, indigents and uniformed personnel. They account for 24.4 percent of the country’s population of around 110 million.

After everyone from Manila who is on the national government’s priority list are vaccinated, residents who have preregistered on the website will be the next ones to be inoculated. As vaccination is voluntary, only those who had preregistered would receive the vaccine when it becomes available.

Treñas said the five-member committee of the LCP had met separately online with Interior Undersecretary Epimaco Densing III and with National Task Force COVID-19 chief implementer Carlito Galvez Jr. to discuss how LCP members could procure vaccines for their cities.

He said private companies could also procure vaccines for their employees but of the total volume purchased, half would have to be donated to the national government.

The group’s major concern is how to release advance payments to vaccine suppliers without violating Commission on Audit (COA) rules and regulations, he said.

“We plan to invite the COA in our next meeting because it would be highly doubtful if suppliers will sell us vaccines without advance payments considering the high demand in all countries,” Treñas said.

In Metro Manila, the cities of Muntinlupa and Parañaque had earmarked an initial budget of P170 million and P250 million, respectively, for their vaccination programs.

Buy more than one kind

House deputy speaker and Bagong Henerasyon Rep. Bernadette Herrera said the government should secure several kinds of COVID-19 vaccines as a “prudent and anticipatory” move for any possible development in the pandemic.

“Given how large our country’s population is, we must accept the reality that we need to have several vaccines, not just one or a few,” Herrera said on Saturday.

She said some vaccines were expected to be given an EUA in the coming weeks.

“I am hopeful the processes could be sped up so we could have mass inoculations as early as January, February, and March starting with the health care front-liners and the country’s workforce,” she said.

“The sooner Filipinos are vaccinated, the sooner we can get our economy moving faster in the New Year ahead of us,” Herrera said.

Rolando Enrique Domingo, FDA director general, said Pfizer’s application for EUA may be approved before the end of January.

The EUA shortens the FDA’s process of approving COVID-19 vaccines from six months to 21 days. With the EUA, the FDA recognizes the vaccines’ approval by foreign regulatory bodies.

Pfizer, a US-based pharmaceutical company, has already secured an EUA from the US FDA.

Domingo said the FDA had approved the application of Belgium-based Jannsen Pharmaceutical, a subsidiary of Johnson & Johnson, to conduct a clinical trial of its vaccine in the country.

The government, in partnership with the private sector, secured 2.6 million doses of the AstraZeneca COVID-19 vaccine for front-liners and private sector employees.

It is also eyeing 25 million doses of the Sinovac Biotech vaccine from China.

Read Next
Vaccination probe: NBI counting on PSG chief’s cooperation
EDITORS' PICK
Heads may roll at BOC, says Palace if sugar smugglers are allowed to use recycled import permits
What to watch out for when selecting a video surveillance solution
DOH reports increase in daily COVID-19 deaths, mostly unvaxxed
House energy committee chair Arroyo bats for cheap electricity
vivo brings to the Philippines a powerful smartphone with a slimmer body, the vivo Y02s for only PHP 6,499
Palace: Biggest supermarkets in PH commit to sell sugar at P70 per kilo
MOST READ
Brian Poe-Llamanzares receives his PhD in Public Administration
Peso loses ground vs US dollar
Alyssa Valdez to miss Creamline’s AVC Cup campaign
Metro Manila’s No. 1 wanted man arrested, says NCRPO
Don't miss out on the latest news and information.