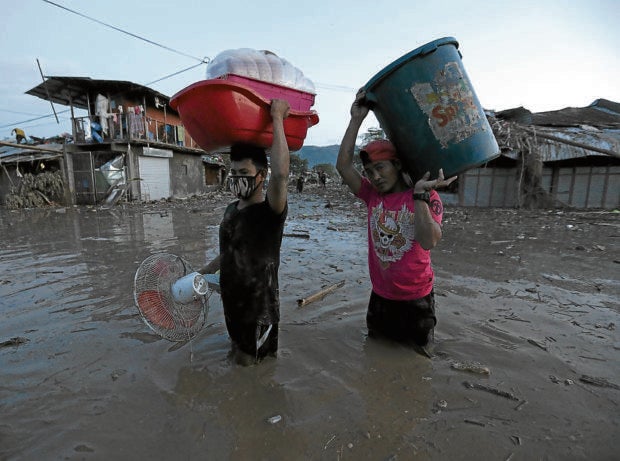 MUDDY PATH Residents wade through mud to retrieve their belongings from their houses at Barangay San Jose in Rodriguez, Rizal, after their subdivision was hit by floods from the swollen Marikina River when Typhoon “Ulysses” (international name: Vamco) battered Luzon in November last year. —RICHARD A. REYES

Filipinos have been through a lot the past year, having suffered the earthquake-volcanic eruption-typhoon disaster triad within what everyone wanted to be a perfect 2020.

Indeed, the year literally started with a bang. Taal erupted on Jan. 12, forcing the eva­cuation of residents not only from the island volcano but also from towns surrounding its lake. Lockdowns in affected communities lasted for weeks as the volcano’s wrath was slow to subside. By mid-March, while residents were just star­ting to doff their face masks as protection from inhaling volcanic dust, they were forced anew to wear them when the coronavirus pandemic struck.

On Aug. 18, a 6.6-magnitude earthquake jolted Masbate when a segment of the Philippine fault zone ruptured, the seventh major event to hit the country in only 16 months and defying the once-every-five-years average for destructive temblors.

Earlier, on April 22, 2019, Zambales shook from a 6.1-magnitude quake, which wreaked havoc mostly in li­quefaction-prone Pampanga. A series of five quakes of magnitudes greater than 6 struck South Cotabato and Davao del Sur only within two months—from Oct. 16 to Dec. 15—which seems to defy known theories in earthquake science.

On Christmas Day, Batangas was jolted by a 6.3-magnitude tremor, but residents should be thankful the focus was very deep (more than 100 kilometers) as it could have caused damage as did the series of four much weaker (magnitude 5.6 and less) but shallower earthquakes in April 2017 that toppled a portion of the façade of Taal Cathedral.

This only follows the 4.9-magnitude quake on Dec. 22 centered in General Nakar, Quezon, which was at least 40 times weaker than the Christmas Day event but felt by many, including Metro Manila residents, because of its shallow focus.In November, four tropical cyclones swept the Philippines in 12 days, starting with Supertyphoon “Rolly” (international name: Goni), which made landfall in Bicol region on a day reserved for the saints. Registering record-breaking one-minute wind speeds (faster than 2013’s Supertyphoon “Yolanda”), Rolly was succeeded by three more typhoons largely exceeding the rainy season average.

Typhoon “Ulysses” (Vamco) closed out the flurry and dumped the heaviest of rains over Metro Manila and Cagayan Valley. Marikina River spilled with record-high floods despite precipitation lower than that of Typhoon “Ondoy” (Ketsana) 11 years earlier.

Even virtual classes for students had to be canceled for the entire month as the successive typhoons rendered internet infrastructure nonopera­tional over an area spanning more than 700 km. Some students are still not able to attend online classes or access the web due to the absence of electricity in their areas. 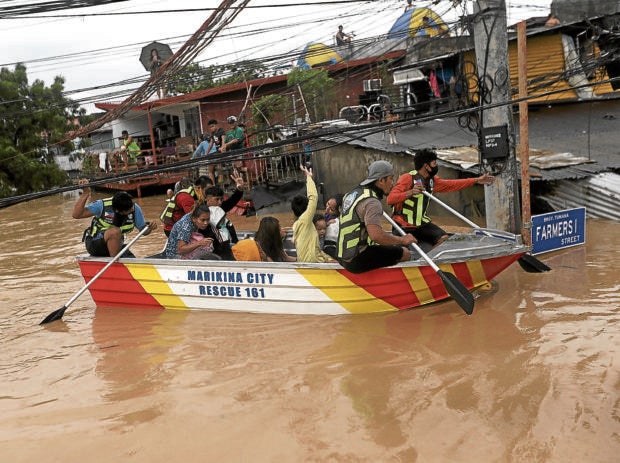 HELP IS COMING A rescue team helps evacuate residents from Barangay Tumana, Marikina City, as rain dumped by Typhoon “Ulysses” in November trigger floods that submerged houses and cars in low-lying areas in the village. —RICHARD A. REYES

But how disaster-resilient really is the Filipino?

We have heard success stories, including Mt. Pinatubo’s 1991 eruption, which was tou­ted as the greatest in the 20th century but resulted in a minimal death toll. Some references in disaster risk reduction and management cite this as the result of a successful scientific exercise involving preeruption, painstaking data gathering and analysis, and a cooperative citizenry that generally heeded warnings. Destructive lahars persisted decades after, but the communities around learned quickly to recover.

But many communities still remain vulnerable. In the many natural disaster areas I had visited, two constraints still persist and pose a challenge to disaster risk managers. One is the culture of “dito kami pinanganak, dito na kami mamamatay” (We were born here and will die here). The other is the victims of circumstance: “Wala naman kaming ibang mapupuntahan” (We have no other place to go). The science of identifying hazard-prone areas in the Philippines, whether related to earthquakes, volcanic activity or extreme weather conditions, has made great advances in the last decades and Filipino experts in this field are known and cited the world over. But identifying hazard-prone areas is one thing, convincing the populace to avoid them is another.

In one instance when I was in a quake-stricken area, my team of geologists was instructed by a local government unit that was about to forcibly evacuate residents in a mountain village threatened by a landslide to explain to them that aftershocks could trigger the danger. While discussing, the religious leader of the village cut my impromptu field lecture by questioning who was I to claim that I can “predict” the recurrence of earthquakes there.

In another instance, my research team had documented the effects of liquefaction around a church built right over the roof of a former church that was buried by lahar 28 years earlier. The findings indicated that some communities still tended to stick to their roots despite being aware that the same disasters can happen again in the same place. 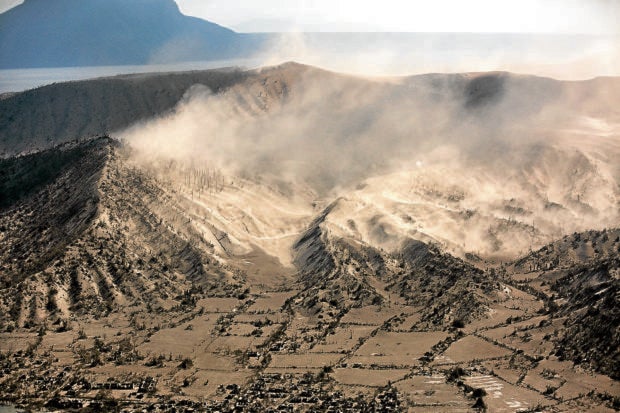 NO MAN’S LAND Taal Volcano Island, “Pulo” to the community of fishermen, farmers and tourism workers once thriving in the area, has turned into a no man’s land after the volcanic eruption in January last year. —GRIG C. MONTEGRANDE

Who to listen to

In times of disasters and emergencies, the National Disaster Risk Reduction and Ma­nagement Council is responsible for ensuring the protection and welfare of the people. It is a working group of many agencies, including those mandated to conduct scientific studies of natural phenomena that can lead to disasters. These agencies are also tasked with gui­ding the government in formulating strategies to respond to the impacts of disasters to communities.

The populace is advised to listen to the Philippine Institute of Volcanology and Seismology on matters of earthquakes and volcanic activities, the Philippine Atmospheric, Geophysical and Astronomical Services Administration on weather disturbances, and the Mines and Geosciences Bureau on geological hazards not related to quakes and volcanoes, like landslides, sinkholes and groundwater-induced processes.

The scope of studies of these agencies sometimes overlaps, such that interaction between and among them is crucial. The academe plays a vital role in supplementing and complementing the results of agency studies. 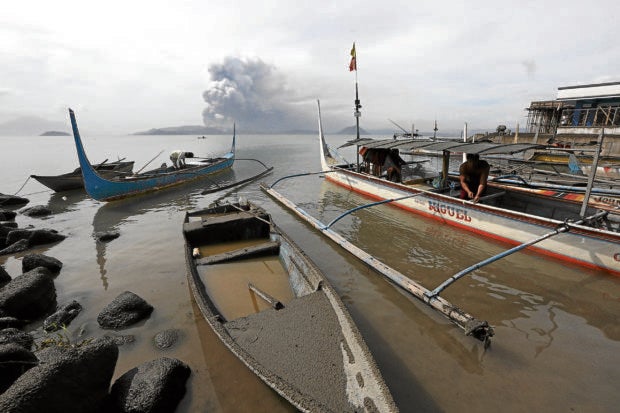 TAAL AWAKENS The eruption of Taal Volcano in Batangas province is among the major natural disasters that struck the country in 2020. —NIÑO JESUS ORBETA

Almost a year after the January eruption, our multidisciplinary team of biologists, geochemists and a DNA microbiologist visited Taal Volcano Island. The climb was steeper and more challenging on the eastern face this time. While worrying about the nonliving elements of the volcano, we managed to reach the crater rim.

Surprisingly, the trek was easy despite the deep gullies carved out in the still fresh pyroclastics. From the midslope to the rim, there was no sign of plant life, yet. What was once a canopy of trees about two stories tall were a few protruding, lifeless, burnt upper tree branches. The landscape was akin to a desert but surrounded by the waters of Taal Lake.

The life scientists stayed close to shore, making their way through the earliest forms of plant regrowth. Tree biologist Lillian Rodriguez and her team said they were able to identify at least 30 plant species and 16 bird species, unexpectedly large numbers and probably an indication that posteruption recovery of biodiversity in the island was rather fast.

DNA microbiologist Alexander Young collected pyroclastic materials along a grid from the lakeshore to the crater rim that will be used in aquarium experiments to see how the recent volcanic sand can affect aquatic life. This was significant in determining how the fish resources of the lake, like cultured tilapias and the endemic “tawilis,” are responding after eruption.

Young also intends to understand how nitrogen-fixing and sulphur-eating bacteria can repopulate the island. Such creatures will be crucial in the recovery of the lost forest of Taal Volcano.

Rodriguez, Young and their life science colleagues are initia­ting a study best performed after a disaster: an ecological succession study meant to determine which species are most resilient and which ones are able to recolonize the fastest. The results will guide efforts to plan for a sustainable development strategy for the island volcano, which, whether we like it or not, is expected to erupt again.

As the island recovers, residents have not been allowed to go back and spend Christmas and New Year the way they have anticipated, but the birds and the trees certainly are starting to celebrate. They seem to know better than humans on how to live with natural hazards.

Mario A. Aurelio, Ph.D. is a professor at the University of the Philippines (UP) and currently director of the National Institute of Geological Sciences in UP Diliman. He is the main author of a Commission on Higher Education-sponsored guide book for senior high school teachers on disaster risk reduction and management.