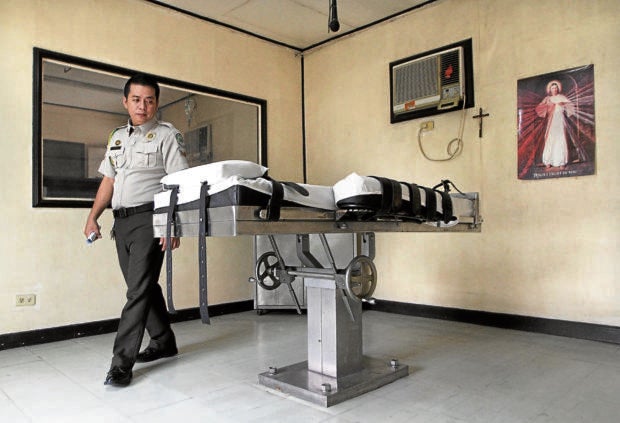 WILL IT BE USED AGAIN? President Duterte, who was elected on an anticrime platform, had called for the return of capital punishment and reiterated this position in his last State of the Nation Address. Before it was abolished under the Arroyo administration in 2006, death penalty in the country was imposed by lethal injection, with the condemned convict executed in this chamber at New Bilibid Prison. —INQUIRER FILE PHOTO

MANILA, Philippines — The Senate has kept the revival of the death penalty, a hot-button issue in the Philippines, on top of the chamber’s legislative agenda for 2021, according to Senate President Vicente Sotto III.

Sotto last week provided reporters a copy of the chamber’s 20-item priority list for the second regular session of the 18th Congress, with the return of capital punishment at No. 3 even after the Senate failed to pass similar proposals despite the appeal of President Duterte.

Aside from capital punishment, Sotto’s list also included proposals to enact laws on land use, the creation of a Department of Overseas Filipinos, Boracay Island Development Authority, National Housing Development Act and reforms or repeal of the Continuing Professional Development Act of 2016.

The President, who still has more than 17 months (545 days) remaining in his term, asked Congress to reimpose capital punishment during his State of the Nation Address last year but the proposal that had already passed the House of Representatives in 2017 stalled in the Senate.

There are at least 10 bills pending in the Senate seeking the restoration of the death penalty as the maximum punishment for either heinous crimes or illegal-drug related offenses, or both.

The Catholic Bishops’ Conference of the Philippines, which has consistently opposed capital punishment, has repeatedly stressed that the death penalty does not really deter crime and that even after the government’s drug war killed 5,810 people, as of September 2020, narcotics trafficking continues.

Opponents of capital punishment argued that the government’s prodeath stance has only emboldened scalawag policemen to abuse their power, as shown by the murder of an elderly woman and her son by an off-duty policeman in Paniqui town, Tarlac province, last month.

Zubiri: 50-50 chanceSenate Majority Leader Juan Miguel Zubiri has said that the death penalty bill only had a 50-50 percent chance of getting enacted in the Senate, as it was an “emotional issue.”

While he commiserated with the victims of heinous or drug crimes, Zubiri said that the reimposition of death penalty would only disadvantage the poor and marginalized.

Sotto himself, who had earlier proposed the death penalty for drug traffickers, said in earlier interviews with the Inquirer that he was developing second thoughts about capital punishment.

The 1987 Constitution prohibits capital punishment “unless for compelling reasons involving heinous crimes, the Congress hereafter provides for it.”

In March 1996, the law was amended with the passage of Republic Act No. 8177, which prescribed lethal injection as the mode for the execution of criminals.

But actual executions did not occur until after former President Fidel Ramos’ tenure.

Between 1999 and 2000, seven inmates were put to death during the term of former President Joseph Estrada. Among those executed was Leo Echegaray, who was convicted of raping his stepdaughter.

But in June 2006, then President Gloria Macapagal-Arroyo signed Republic Act No. 9346, which abolished the death penalty. There were an estimated 1,200 inmates on death row at the time.

President Duterte, who was elected on an anticrime platform, had called for the reimposition of death penalty and the House of Representatives, in March 2017, passed a bill restoring the death penalty for heinous crimes and drug-related offenses. But the bill got stalled in the Senate. —WITH A REPORT FROM KATHLEEN DE VILLA