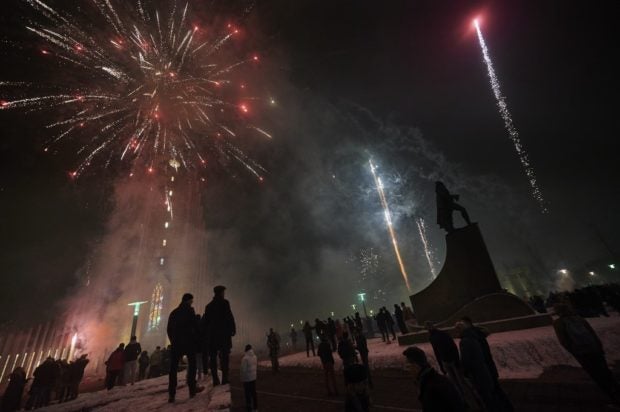 Icelandic people celebrate New Year’s Eve and hope for a brighter 2021 as fireworks light up the sky in Reykjavik, Iceland on December 31, 2020. With only a third of the regular party crowd gathering around Hallgrimskirkja church, where the statue of Leif Erikson stands,
and a heavy fog, revelers still celebrated the coming of the new year with fireworks. Photo by Halldor KOLBEINS / AFP

REYKJAVIK — While New Year’s Eve fireworks are hardly rare, Icelanders take the tradition to breathtaking heights, firing the dazzling incendiary devices from back gardens, streets, hilltops or city parks across their Nordic island.

Iceland’s law provides a brief window, from December 28 to January 6, when buying and shooting off fireworks is allowed, and citizens buy more pyrotechnics in a week than most Europeans do all year — all in the name of charity.

Each year the nation’s 365,000 inhabitants buy around 600 tonnes of fireworks, more than a kilo and a half (three and a half pounds) per person, according to Statistics Iceland.

That’s more than six times the EU average in a full year, according to Eurostat, and only the Dutch come close to competing with Icelanders’ love for noisy bursts of color in the wintry night sky.

The bulk of the devices go up on New Year’s Eve, turning the sky above the subarctic island into a glittering canopy from the capital Reykjavik to the smallest village.

“We sort of burn away the past year and make way for the new one, which I think we’ll be very happy to do this year,” said Dagrun Osk Jonsdottir, a doctoral student and expert on Icelandic folklore.

The tradition, dating to the early 20th century, is rooted in the Nordic bonfire, a much older custom that is banned this year anyway because of the pandemic.

Once too expensive for most Icelanders, fireworks became more accessible to the general public thanks to a fund-raising campaign launched in 1968 by the volunteer Icelandic Association for Search and Rescue (ICE-SAR).

The group, which controls most of the fireworks trade, has relied on the annual sales to finance its activities for the rest of the year ever since.

“It’s a bit strange to think that we are so dependent on this sale,” ICE-SAR president Thor Thorsteinsson told AFP.

“But we want to continue because we haven’t been able to find other ways of raising funds.”

The organization’s 93 volunteer rescue teams spread throughout the country respond to emergencies that public services cannot because of long distances and difficulty of access in many parts of the sparsely populated country.

While many of the fireworks are fired from private gardens, the New Year’s Eve displays follow a common timetable.

A first round, lasting around an hour and a half, begins around 8 pm after the prime minister’s year-end speech.

The sky goes dark and quiet for the next hour as just about every breathing person in Iceland — a record 99.7 percent of the population in 2019 — turns on the TV for “Aramotaskaup”.

The must-watch annual comedy show, whose title loosely translates as “Jollies of the Year”, is a recap of the year’s events with a hefty dose of satire.

Warmed and amused by the show, Icelanders venture back out into the cold to set off their fireworks extravaganza in earnest.

As with many traditions elsewhere, Icelanders’ fireworks excesses have recently come under scrutiny.

In 2018, unfavorable weather combined with the fireworks to pollute Reykjavik’s usually pure air with microparticles, reaching levels associated with megacities like Beijing or New Delhi.

The highest hourly value, 3,000 micrograms per cubic meter, was detected in Kopavogur on the outskirts of the capital, setting a European record according to a study by the University of Iceland.

The government is considering cutting the fireworks purchasing window to three days from the current 10.