After a year like no other, New York's Times Square empties out on New Year's Eve | Inquirer News
Close
menu
search

After a year like no other, New York’s Times Square empties out on New Year’s Eve 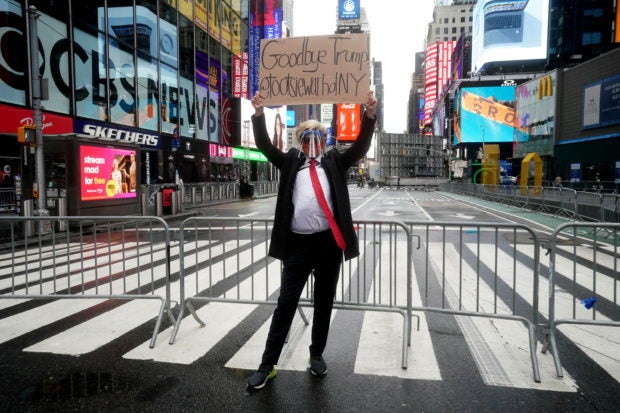 NEW YORK – Only a handful of invited guests, including health care workers and others from the front lines of the coronavirus pandemic, will gather on Thursday evening in New York’s Times Square to witness the dropping of the New Year’s Eve ball, marking the end of a sobering 2020 and a hopeful start to 2021.

For decades, tens of thousands of merrymakers — many of them tourists — have filled the blocks around Times Square on New Year’s Eve, standing for hours in the cold waiting to see a glittering crystal ball glide down a pole mounted atop a skyscraper in the year’s final seconds. When the ball reaches the bottom, the crowds erupt in hugs, kisses and good cheer.

But this year Mayor Bill de Blasio and police officials have told New Yorkers and out-of-towners alike to stay away and watch pared-down festivities on television. A large contingent of police officers will barricade the area to prevent unauthorized people from gathering, aiming to prevent an event that could accelerate the spread of the virus in a city already struggling to contain it.

Scores of New Year’s Eve events around the United States have been similarly curtailed or moved online.

“It’s going to be actually, arguably, the most special, the most poignant, the most moving New Year’s Eve,” de Blasio, who will push the button to start the crystal’s ball descent, told reporters. “In 2021, we’re going to show people what it looks like to recover, to come back.”

Some people either didn’t get the message or decided to come to Times Square anyway, hoping to get an early glimpse of the ball before police started to clear the plaza of anyone who was not authorized to be there.

“It’s actually sad to see such a big distress, but I wanted to be here because it is my tradition,” Matt Wozniak, a 41-year-old New Yorker who owns a construction business, said in explaining why he came to Times Square on Thursday morning. “I’ve been coming for many years, sometimes in a big crowd. Now it’s different – it feels different.”

New York police will allow only a few dozen people to watch the ball drop at the so-called Crossroads of the World in midtown Manhattan. Organizers have invited a grocery store worker, a building doorman, a pizza delivery man and doctors and nurses, including Sandra Lindsay, the New York nurse who became the first recipient of a coronavirus vaccine in the United States outside of a trial earlier this month.

The masked guests, spaced apart for safety, will gather in front of a temporary stage set up in the plaza to see live performances by the Bronx-born singer Jennifer Lopez and Gloria Gaynor, who will perform her disco classic “I Will Survive.”

More than 25,000 New Yorkers have been killed by COVID-19 this year. In the spring, during the early days of the U.S. outbreak, the city emerged as the epicenter of the pandemic.

“New York is undefeatable — as the world is,” Kathleen Mukameal, 62, a retired New Yorker who now works as a voting rights activist, said during an early swing through the square. “We’re celebrating everything good and we have so much to be grateful for in spite of this horrific situation that we’re enduring.”

As new daily case tallies continue to rise across the United States, bars and restaurants and other gathering places in New York City are closed or have sharply limited capacity.

In Las Vegas, Boston and beyond, official fireworks displays have been canceled. Organizers of Boston’s annual First Night arts festival on New Year’s Eve have arranged for six hours of live performances streamed online by local musicians and artists.