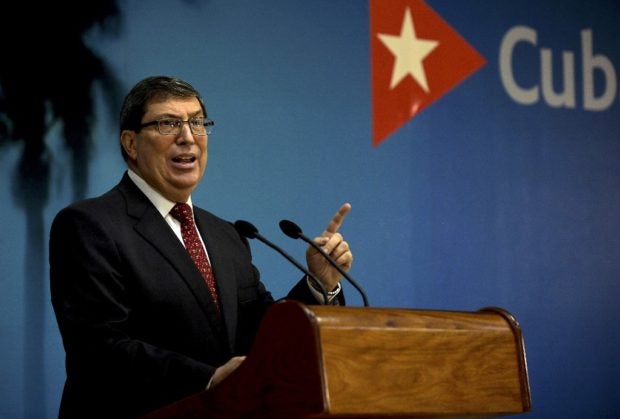 WASHINGTON — Cuba on Wednesday warned the outgoing US administration against redesignating the island as a state sponsor of terrorism, a move reportedly under discussion that could hinder President-elect Joe Biden’s diplomacy.

Secretary of State Mike Pompeo is reviewing the possibility before leaving office on January 20 of returning Cuba to the blacklist, which severely impedes foreign investment, a person familiar with the situation said.

CNN, quoting an unnamed senior administration official, said that Pompeo would make the designation “in the coming days.”

The New York Times first reported that the State Department had drawn up the proposal but said it was unclear if Pompeo would sign off on it.

“I denounce Sec of State Pompeo maneuvers to include #Cuba in the list of States sponsoring terrorism to please the anti-Cuban minority in Florida,” Cuban Foreign Minister Bruno Rodriguez wrote on Twitter.

“#US grants shelter and impunity to terrorist groups acting against Cuba from that territory,” he said, in a familiar charge against Cuban-American anti-communist activists who deny any wrongdoing.

The discussion comes ahead of the 60th anniversary on January 3 of the United States severing relations with the nearby island following Fidel Castro’s communist revolution.

Tensions finally eased under former president Barack Obama, who declared the policy of isolating the island to be a failure, established diplomatic relations and removed Cuba from the terrorism list in 2015.

Biden, who was Obama’s vice president, has given only broad details of his Cuba policy but has indicated he would again relax restrictions on Americans traveling to Cuba and sending money to family on the island, while still raising concerns on human rights.

Biden could again remove Cuba from the blacklist but his State Department would need to undertake a formal review that declares that the country has not been involved in terrorism over the previous six months.

It is unclear on what grounds Pompeo would designate Cuba, but before Obama the United States would point to Havana’s support of leftist movements in the Western Hemisphere.

A State Department spokesperson said the agency does not “discuss deliberations or potential deliberations regarding designations.”

President Donald Trump’s tough stance on Cuba and its ally Venezuela was credited with wooing immigrant communities and helping him win the crucial state of Florida in last month’s election.

The designation comes with broad sanctions that scare away many foreign investors who do not want to risk penalties in the world’s largest economy.