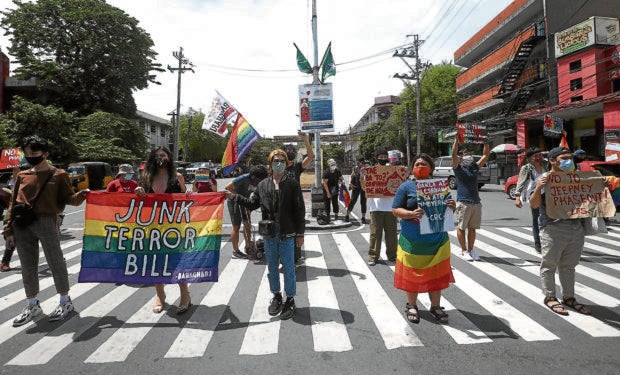 GAY PRIDE Protesters display placards during a Pride March near Malacañang Palace in Manila in this June 26 photo amid a ban on public gatherings. —AFP

MANILA, Philippines — A Manila prosecutor has dismissed the complaint filed by the police against 17 people who were arrested after joining this year’s Pride March in June, saying there was no probable cause to charge them with illegal assembly, resisting arrest and violating quarantine protocols.

In a resolution dated Dec. 2 but released only on Tuesday, Assistant City Prosecutor Kristine Cirilo said that while the participants did not have a permit for the march in Mendiola, they voluntarily dispersed when asked by authorities.

“The crowd eventually left the area and took to their own vehicles. The irony came when the police officers who were charged to disperse the assembly actually prevented the participants from leaving the area and proceeded to arrest them,” Cirilo added.

The so-called “Pride 20” — members of LGBTQ+ organizations Bahaghari and Metro Manila Pride — insisted that they had worn masks and observed physical distancing during the assembly, adding that they voluntarily went with authorities who had apprehended them.

Of the 20 who were arrested, three were later released after they were found to be minors. The rest were also freed days later.

Cirilo said in her resolution that public assemblies without any permit from the city mayor may be peacefully dispersed, although the leader or organizer would be penalized.

Cirilo also cited video footage submitted as evidence in Pride 20’s counteraffidavit showing that the assembly was held peacefully while participants observed social distancing to prevent the spread of COVID-19.

“It appeared that if there were persons who were disorderly, these were the members of the media (photographers and videographers) covering the event, but they were not included in the complaint,” she observed.Minerva Lopez, legal counsel for the 17 respondents, welcomed Cirilo’s resolution because it was “based on evidence” and only proved that the arresting officers were the ones who caused a scuffle.

In an interview with the Inquirer on Tuesday, Lopez said Cirilo’s resolution could be cited in case participants of peaceful assemblies in the future be arrested.

“How do you violate [Batas Pambansa 880] and what is wrong with the actions of police? They have been using that law as a basis for arresting rallyists without permits. So it is very clear [in the resolution] how that law must be correctly interpreted,” she said, citing the Public Assembly Act of 1985.

According to her, Pride 20 will be filing a manifestation on Wednesday in addition to the criminal and administrative complaints already pending against their arresting officers in the Office of the Ombudsman.

Among the charges was violation of the Safe Spaces Act after Manila police officials allegedly harassed one of their members, transgender woman Rey Valmores-Salinas, in detention.

In a previous interview, Salinas said that she had wanted to join female detainees in their quarters but her request was declined after lawmen insisted she was a man.