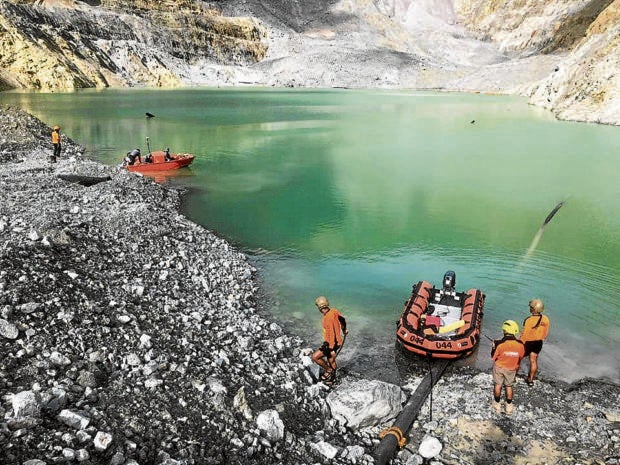 SEARCH ISN’T OVER Rescuers of the Philippine Coast Guard continue to look for the six workers of Carmen Copper Corp. who went missing after a section of a mine pit in Toledo City collapsed on Dec. 21. —PHOTO COURTESY OF TOLEDO CITY PUBLIC INFORMATION OFFICE

CEBU CITY, Cebu, Philippines — At least 400 families living near a landslide-hit mine site in Toledo City will spend New Year’s Day inside evacuation centers after the local government started transferring them to safer ground on Sunday.

Their transfer was ordered as cracks in a mining pit of Carmen Copper Corp. (CCC) widened.

Geologists from CCC informed the city government about the wide cracks they discovered near the mining site, prompting local officials to take the necessary measures to prevent any untoward incident.

“This is what we call forced evacuation with the intention to ensure the safety of everyone,” John Roseller Layan, Toledo public information officer, told the Inquirer in a telephone interview.

On Dec. 21, four mine workers died after a section of the pit collapsed following heavy rain. Six workers remain missing.

Layan said the first batch of evacuees was brought to the covered court of Sitio Hagit in Barangay Biga, a kilometer away from the danger zone.

The villagers will stay at the shelters until the Mines and Geosciences Bureau deemed it safe for them to return home.

But Layan said it was possible that they would be transferred to another area instead of allowing them to live near the mine site. “One option being considered is to relocate them,” he said.

As of Monday, at least 346 families, consisting of 1,820 people, were transferred to the evacuation center. Pedro Sepada, Biga village chief, said the lack of portable toilets, food and water remained a major problem in the site.

The Department of Social Welfare and Development provided evacuees with packed meals of rice, sardines, beef loaf and water. But Sepada was anxious about the well-being of evacuees as they might acquire cough and colds.

“Some of them were hesitant to transfer to the evacuation center but they have no other choice but to follow the order of the government,” he said. The city government is preparing two additional evacuation centers so residents could observe the health protocols to prevent the spread of the new coronavirus disease (COVID-19).

“So far, physical distancing is a concern since the evacuation center we have now is small,” Sepada said.

In a statement on Sunday, CCC promised to support the education of the children of its employees who died in the accident and those who were still missing.

It also offered jobs to the victims’ next of kin, spouses and children.

Layan said the Toledo government had deployed K9 dogs, sought assistance from the Philippine Coast Guard, and used sonar equipment to scour the pit’s lake bed for signs of the missing workers.

“It seems that rescuers are doing nothing. But that is not the case here. We just don’t want to endanger the lives of the rescuers especially that huge cracks have been found in the area,” he said.