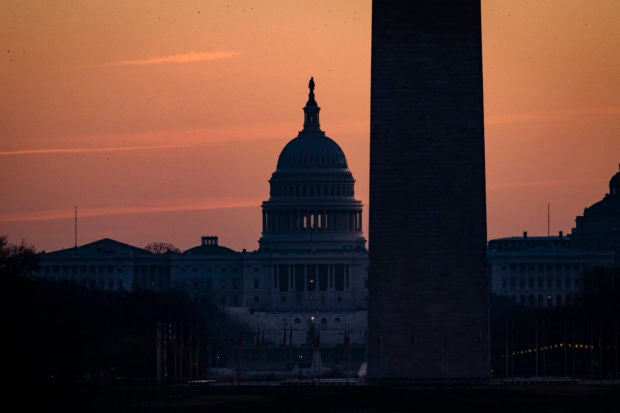 WASHINGTON, DC – DECEMBER 27: The U.S. Capitol Building is seen past the Washington Monument as the sun rises on December 27, 2020 in Washington, DC. Millions of Americans lost unemployment benefits today, which they were depending on for support during the coronavirus (COVID-19) pandemic. President Donald Trump has yet to sign the stimulus relief bill that was passed by overwhelming majorities in the House and Senate last week. Samuel Corum/Getty Images/AFP

WEST PALM BEACH – US President Donald Trump on Sunday promised “good news” on a massive Covid-19 relief bill that he has so far refused to sign, but did not give further details as millions of Americans struggling through the pandemic faced the loss of unemployment benefits.

“Good news on Covid Relief Bill. Information to follow!” the president tweeted during his Christmas vacation at his Mar-a-Lago resort in Florida, without elaborating further.

For nearly a week, Trump has refused to sign the $900 billion relief package approved overwhelmingly by Congress following months of negotiation, calling it a “disgrace.”

Two federal unemployment benefit programs approved in March as part of an initial Covid relief plan expired at midnight on Saturday, cutting off an estimated 12 million Americans, according to The Century Foundation think tank.

The delay also threatened to provoke a government shutdown by Tuesday since the relief package is part of a larger spending bill, though lawmakers could approve another temporary extension to keep the government open.

The relief package, passed by Congress on December 21, would extend those benefits as well as others set to expire in the days ahead.

But Trump has pushed for the $600 direct payments to US taxpayers spelled out in the bill to be more than tripled, and argued the legislation included too much excess spending on unrelated programs.

He did not say why he waited until the bill was already approved to make his views known.

President-elect Joe Biden, due to be sworn in January 20 after beating Trump in November’s election, warned of “devastating consequences” on Saturday if the president continued his refusal.

Earlier Sunday, some Republicans were urging Trump to change course, noting the bill was the result of painstaking compromise.

“I understand he wants to be remembered for advocating for big checks, but the danger is he’ll be remembered for chaos and misery and erratic behavior if he allows this to expire,” Republican Senator Pat Toomey told Fox News on Sunday.

Trump has not explicitly said whether he will veto the bill.

Congress could in theory override his veto, though it is unclear whether Republicans would choose to defy him to that degree.

Another option would be for Trump to simply do nothing, resulting in a “pocket veto” since Congress’s current session is due to end and a new one will begin on January 3.

Democrats in Congress sought Thursday to approve a measure to increase the direct payments in line with what Trump wants, but Republicans blocked it.

It was seen largely as a theatrical move with little hope of passage designed to expose the rift between Republicans and the outgoing president.

Senator Bernie Sanders said Sunday that “what the president is doing right now is unbelievably cruel.”

“Many millions of people are losing their extended unemployment benefits,” he said on ABC.

“They’re going to be evicted from their apartments because the eviction moratorium is ending.”

Sanders urged Trump to sign the bill and said increased direct payments could be approved in the coming days.