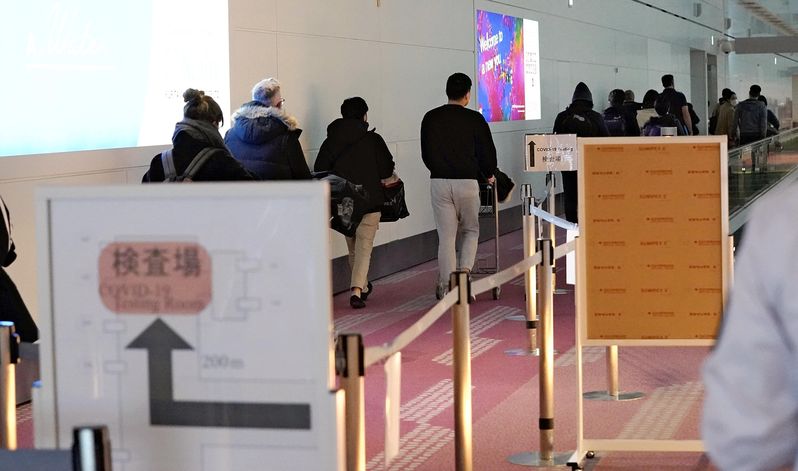 Airline passengers arriving from London head toward a novel coronavirus testing station at Haneda Airport on Thursday. Photo by The Yomiuri Shimbun

TOKYO — The government is strengthening its border containment policies after several people in Japan were found to be infected with a variant of the novel coronavirus spreading in Britain and elsewhere.

Following the five people who tested positive at airport quarantine inspections, the new variant was confirmed Saturday in a male pilot who had returned home from the airport and a female family member.

The government has been testing both Japanese and foreign nationals arriving from more than 150 countries and regions at airport quarantine stations.

In principle, even those who test negative are asked to isolate themselves for two weeks.

In response to the new variant, the government announced stronger quarantine measures for returnees from Britain and South Africa. They will be asked to stay in accommodation facilities even if they test negative at the airport and will be tested again three days later.

Pilots had been exempted from airport testing and self-isolation to prevent any operational disruptions.

Under these circumstances, some infections were invariably missed.

Yet as the variant is being found in countries besides Britain and South Africa, there are limits to what can be done with border containment measures.

While people entering from Italy, the Netherlands, Denmark and Australia — all countries where the variant has been detected — are tested even if they have no symptoms, unlike arrivals from Britain and South Africa, those who test negative are not asked to stay in accommodation facilities to be retested.

The new variant is said to be highly contagious, though many people who are infected suffer mild to no symptoms.

“There’s concern that the variant which wasn’t stopped at the border will accelerate the spread of infections domestically,” a senior Health, Labor and Welfare Ministry official said.

The government’s suspension of new entries by foreigners from all over the world is aimed at limiting the influx of the new, highly contagious variant as much as possible.

The relaxation of travel restrictions aimed at supporting the recovery of a sluggish economy has been temporarily halted, with the government giving priority to controlling the pandemic.

The government had been gradually relaxing its travel restrictions, such as by allowing foreign workers and international students to enter the country under certain conditions and exempting Japanese travelers from quarantining upon return to encourage overseas business travel.

However, unable to stop the spread of the infections domestically, the government decided that, “This is not a situation where we can gain the understanding of the public, so a suspension for the time being was unavoidable,” a senior government official said.

Nevertheless, business travel between countries such as China and South Korea will continue.

Read Next
What now? Nearly on the cusp of COVID-19 conquest, the virus mutates
EDITORS' PICK
House energy committee chair Arroyo bats for cheap electricity
PNP: To avoid crypto scam, visit BSP website
LPG prices up by P2.25-P2.27/kg effective Dec 1
MARCOS: PH MUST FIND WAYS TO OVERCOME ‘ROADBLOCK’ FROM JOINT OIL EXPLORATION IN WPS | INQToday
The vivo Y16 makes the season of giving more thoughtful for the whole family
The Best Tech Gifts For The 2022 Holidays
MOST READ
Don't miss out on the latest news and information.