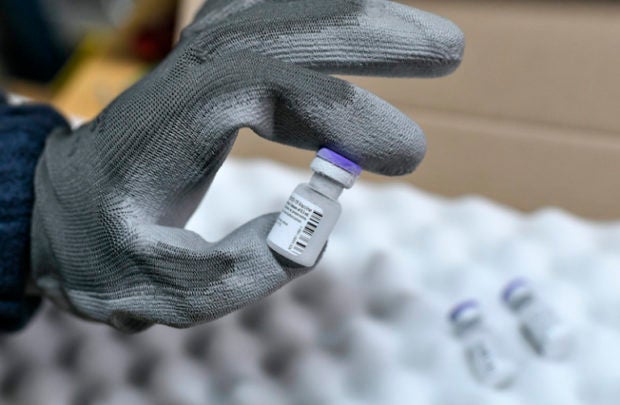 A worker shows a vial of Pfizer-BioNTech Covid-19 vaccine at the arrival of the first shipment in France in the AP-HP central pharmacy on the outskirts of Paris on Dec. 26, 2020. Image: AFP/Stephane De Sakutin

The European Union began a vaccine rollout Saturday, even as countries in the bloc were forced back into lockdown by a new variant of the virus, believed to be more infectious, that continues to spread from Britain.

The pandemic has claimed more than 1.7 million lives and is still running rampant in much of the world, but the recent launching of inoculation campaigns has boosted hopes that 2021 could bring a respite.

Hours before the first vaccine doses arrived in France, Paris’s health ministry confirmed late Friday that it had detected its first case of the new variant in a citizen returned from Britain.

Several countries have reported cases of the new variant, which has sent jitters through already overstretched health services.

There was little sign of the usual Boxing Day sale rush on the streets of Sydney Saturday, as residents largely heeded the state premier’s request they stay home faced with a new virus cluster.

“Even when we entered the store there were less than ten people,” shopper Lia Gunawan told The Sydney Morning Herald after queueing up for the sales.

Even as some European nations eye a post-Christmas return to harsh restrictions, China’s communist leadership issued a statement hailing the “extremely extraordinary glory” of its handling of the virus that emerged in the country’s Hubei province last year, state news agency Xinhua reported.

Across the world, people are being urged to respect social distancing guidelines, as the World Health Organisation urged people not to “squander” the “great, heart-wrenching sacrifices” people had made to save lives.

The first French case of the new coronavirus variant was found in a citizen resident in Britain who arrived from London on Dec. 19, the French health ministry said.

They are asymptomatic and self-isolating at home in Tours in central France, and contact-tracing has taken place for the health professionals who treated him.

The new variant of the virus, which experts fear is more contagious, prompted more than 50 countries to impose travel restrictions on the United Kingdom, where it first emerged.

But cases of the new variant have still been reported worldwide: on Friday, Japan confirmed five infections in passengers from the United Kingdom, while cases have also been reported in Denmark, Lebanon, Germany, Australia and the Netherlands.

South Africa has detected a similar mutation in some infected people, but on Friday denied British claims its variant was more infectious or dangerous than the one originating in the U.K.

The closure of the U.K.-France border for 48 hours led to a bottleneck of up to 10,000 lorries in southeast England, with drivers stranded for days over the festive period.

But the head of the Calais port operator told AFP that after the port remained open over Christmas specially, the “situation should be completely taken care of” soon.

Some countries that loosened restrictions slightly for Christmas have re-imposed them. Austria, for example, will see a curfew imposed from Saturday until 24 January.

Millions in the United Kingdom have been affected by a tightening of restrictions there. According to the BBC, more than 40% of England’s population are now affected by the strictest measures which include the closure of all non-essential businesses and a limiting of social contacts.

New lockdowns also started in Scotland and Northern Ireland on Saturday, and Wales has re-imposed restrictions too after relaxing them for Christmas.

More than 25 million infections have been recorded in Europe, according to an AFP tally on Friday.

Vaccinations in all 27 European Union countries will begin on Sunday, after regulators approved the Pfizer-BioNTech vaccine on Dec. 21.

As vaccine rollout gets underway across the world, WHO chief Tedros Adhanom Ghebreyesus warned on Friday:

“Vaccines are offering the world a way out of this tragedy. But it will take time for the whole world to be vaccinated.”

The Pope’s Christmas message also referenced the issue, with a plea for “vaccines for all.”

“I call on everyone, on leaders of states, on businesses, on international organizations, to promote cooperation and not competition, to find a solution for everyone… especially the most vulnerable and most in need in all regions of the planet,” Pope Francis said. JB

Over 24,000 people volunteer to be infected with coronavirus to speed up vaccine development

Caring for Lola Linda at home: Dementia amid the COVID-19 pandemic

Read Next
2 suspected NPA leaders nabbed on Christmas Day in Sorsogon
EDITORS' PICK
Smart reaffirms 5G leadership as PH’s most reliable 5G mobile operator
4 essentials for overcoming data protection challenges in the New Normal
Huawei’s relentless mission to bring ultimate health and wellness tracking for your fitness goals
Gordon to Pharmally’s Mago: Show up or be a fugitive
294 areas in NCR under granular lockdown — PNP
Pharmally’s Mago no longer in her condo unit — Gordon
MOST READ
Senators secure Pharmally exec offering to turn witness
Carlo Aquino reveals he almost starred in hit Korean series ‘Squid Game’
‘If it goes to Malacañang, so be it’: Lacson vows to follow evidence in Pharmally probe
Typhoon Lannie likely to intensify on Monday
Don't miss out on the latest news and information.