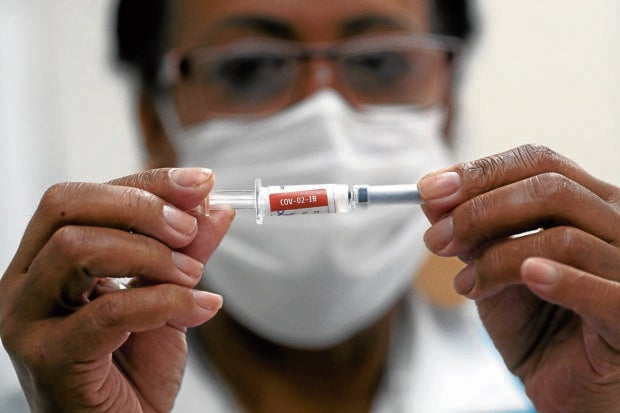 CHINA-MADE A nurse holds a syringe before administering an injection to a volunteer in the trial stage of the COVID-19 vaccine Coronavac at Emilio Ribas Institute in Sao Paulo, Brazil, in this photo taken on Dec. 11. —REUTERS

MANILA, Philippines — Despite growing opposition from lawmakers to a Chinese-made vaccine against COVID-19 that was at least 50-percent effective, the Department of Health (DOH) assured Filipinos that the CoronaVac made by China’s Sinovac Biotech conformed with standards set by the World Health Organization (WHO).

Health Undersecretary Maria Rosario Vergeire said that before any vaccine was approved for use in the country, it must pass scrutiny by the vaccine expert panel—the scientific advisory committee of the Food and Drug Administration (FDA)—and an assessment council that would examine its risk-benefit and the cost-effectiveness of the procurement.

“With all these layers, we can be assured that what we will buy would be appropriate and that the government will be efficient when it procures these,” Vergeire said at the Laging Handa briefing on Saturday.

Senators earlier said buying vaccines with a 50-percent efficacy rate would be a waste of money and would not build public trust in vaccines.

The Philippine government is eyeing to secure up to 25 million doses of the Sinovac vaccine.

Two vaccines made by two American drugmakers already approved for use in the United States and the United Kingdom, have higher rates of efficacy—95 percent (by Pfizer/BioNTech) and 94 percent (by Moderna).

The private sector, with government approval, has secured 2.6 million doses of the AstraZeneca vaccine, which its British manufacturer said early this month was 70-percent effective in pivotal trials and could be up to 90-percent effective. It is expected to be released by the second quarter of 2021.

Responding to the concerns, Vergeire said a 50-percent efficacy rate was within international standards.

“Our countrymen need to understand that the [WHO] set the minimum efficacy rate for vaccines during an outbreak situation and that minimum would be 50 percent, and the desired efficacy would be 70 percent,” she said.

The US Food and Drug Administration and the European Medicines Agency also set a minimum efficacy rate of 50 percent for the COVID-19 vaccine, she said.

In separate statements, Agusan del Norte Rep. Lawrence Fortun and Ako Bicol Rep. Alfredo Garbin Jr. stressed the need for a vaccine with the highest potency, the least side effects, and the most reasonably priced for the country’s immunization program.

Garbin urged the FDA to act fast and register and certify the use of vaccines developed by Pfizer and Moderna, citing their approval by the United States, United Kingdom, European Union, Singapore, Japan, and other countries.

He said the FDA’s approval would also allow the private sector, local government, and even Churches to procure them “for the people they wish to vaccinate.”

He insisted, however, that the government only use vaccines that had passed the third stage of clinical trials, as these would have the data that the FDA needed in deciding which vaccine to approve.

“Billions of pesos in public funds will be wasted if the selected vaccine will not address our needs, and obviously, our lives and health are at stake here,” Garbin said.

Fortun agreed, saying it would be “nonsense” if Filipinos or the government would insist on using CoronaVac given its bare minimum efficacy rate.

“Our government must not give in to any overture, pressure, or campaigning by the Chinese government, the Chinese embassy, or any of their proxies. Our government should abandon any prior verbal agreement they may have had. They should politely decline the offers about Sinovac,” Fortun said.

“No sane Filipino should allow himself or herself to be injected with a vaccine like Sinovac, which barely hurdled the minimum standards. Whatever political game was afoot involving Sinovac, it is now game over, thanks to the DOST (Department of Science and Technology) scientists who decided to reveal the truth about Sinovac,” Fortun added.

Garbin said the government should select vaccines that should “match the target segments of the population.”

He said that regardless of cost, the “most potent” of all the vaccines should be given to the health-care front-liners and those with the least side effects and contraindications be given to senior citizens.

The adult workforce, he added, can be inoculated with vaccines that are “both reasonably priced and with high efficacy during the third phase clinical trials.”

According to interim data from a late-stage trial in Turkey, the Chinese vaccine is 91.25-percent effective, a potentially much better result than what had been reported from a separate trial of the CoronaVac in Brazil.

Researchers in Brazil, which is also running a final phase 3 trial of the vaccine, said on Wednesday that the shot was more than 50-percent effective, but withheld full results at the company’s request, raising questions about transparency.

Sinovac has signed supply deals with Turkey, Indonesia, Brazil, Chile and Singapore, and is negotiating with the Philippines and Malaysia.

Vergeire noted the limited supply of COVID-19 vaccines and that not all countries would be able to get an equal share of what’s available.

“Whatever funds we will use for the vaccines would help us with our objective of protecting the population. So with all of these negotiations, our vaccine czar is ensuring that the vaccines we will get will be in accordance with international standards,” Vergeire said. —WITH REPORTS FROM REUTERS INQ

Read Next
Return of in-person classes on hold due to virus mutation concerns
EDITORS' PICK
Pru Life UK receives four golden arrows for solid corporate governance
Speed up your game with the new vivo Y20s [G]
PH’s COVID-19 active cases reach over 190k after 12k new infections reported
Harry Roque in hospital for COVID-19 treatment
Pre-order the new vivo Y20s [G] to get a free TWS earphone
WHO says not to use ivermectin on COVID-19 patients
MOST READ
Stop ‘creeping occupation’ of ‘militia’ boats in WPS, Pacquiao asks China
Bea Alonzo clarifies status of her relationship with Dominic Roque
Convicted former aide of Sen. Bong Revilla dies — BuCor
Locsin to China: ‘Then move out’
Don't miss out on the latest news and information.