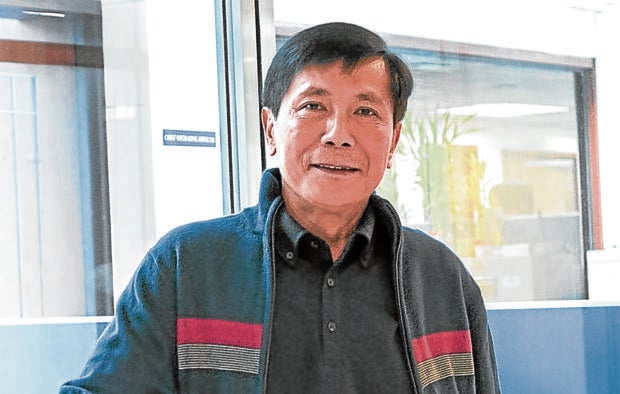 Teddyvic Silva Melendres, a veteran newsman who retired as senior desk editor of the Philippine Daily Inquirer in July last year, died on Christmas Day. He was 60.

A proud son of Lipa in Batangas, Melendres was also a former sports editor of the Inquirer, taking over in 2003 after a stint as Libre’s editor in chief. After shaping the section to what it is today, he took on a more challenging role by joining the news desk in 2017 until the rare and debilitating Lou Gehrig’s disease forced him into calling a premature end to a distinguished newspaper career.

He is survived by his wife, Maria Nelanie, sons Ted Andrei, Ted Leonid and Ted Sergei, and sisters Julie, Myrna, Emmie and Glacie.

Melendres was one of the best in the sportswriting fraternity, starting out as the editor of the defunct Champ Magazine and later on recruited to join the “Dream Team” sports section of the Daily Express in the mid-1980s under the late Tony Siddayao. After that paper folded in 1987, Melendres joined the People’s Journal as its assistant sports editor before being promoted to the news desk of what was then the No. 1 tabloid in the country.

“With his vast experience as a sportswriter and news copyreader, Ted was the ideal candidate when the Inquirer searched for a sports editor,” said Jun Engracia, the retired Inquirer news editor who was principally responsible for handing Melendres the reins to the sports desk. “Unassuming and low-key, he was comfortable to stay behind the scenes and sit behind the desk, presiding over the Inquirer’s most memorable sports coverages in the 21st century.”

Melendres served two terms as president of the Philippine Sportswriters Association, the country’s oldest media organization, from 2009 to 2011, and was responsible for some of the grandest awards nights ever staged by the group.

“Inquirer Sports wouldn’t have gotten to where it is today without his leadership and dynamism,” said Francis Ochoa, who inherited the sports section when Melendres went to the news desk. “His work ethic—especially his attention to detail and excellence in writing—was one of the best that we have seen in the sportswriting profession.”

In the early 1990s, Melendres’ talent as a reporter and deskman had him included as one of the few members of the first batch of recruits of the Hong Kong Standard, where other Filipino journalists who later took jobs there were measured by the same efficiency and dedication that he worked with.

“As my assistant, Ted made things a lot easier for me,” said Joe Antonio, the longtime People’s Journal sports editor. “He was a good sportswriter, a good man, and a great friend.”

Melendres reported on the Beijing (2008), London (2012), and Rio de Janeiro Olympics for the Inquirer, the Brazil Games in 2016 being his last foray in the sports beat before he strengthened the news division until his retirement.

“In the few occasions he left his comfort zone to go out and cover an event, he did it with aplomb,” Engracia added. “When he left the sports section to join the news desk, it was to lend depth to a newsroom that was about to lose most of its veteran editors to retirement. He was supposed to be part of the transition to the new generation of Inquirer editors. Alas, his role was cut short by his ailment.”

Interment is being finalized and will later be announced by his family. —Musong R. Castillo INQ