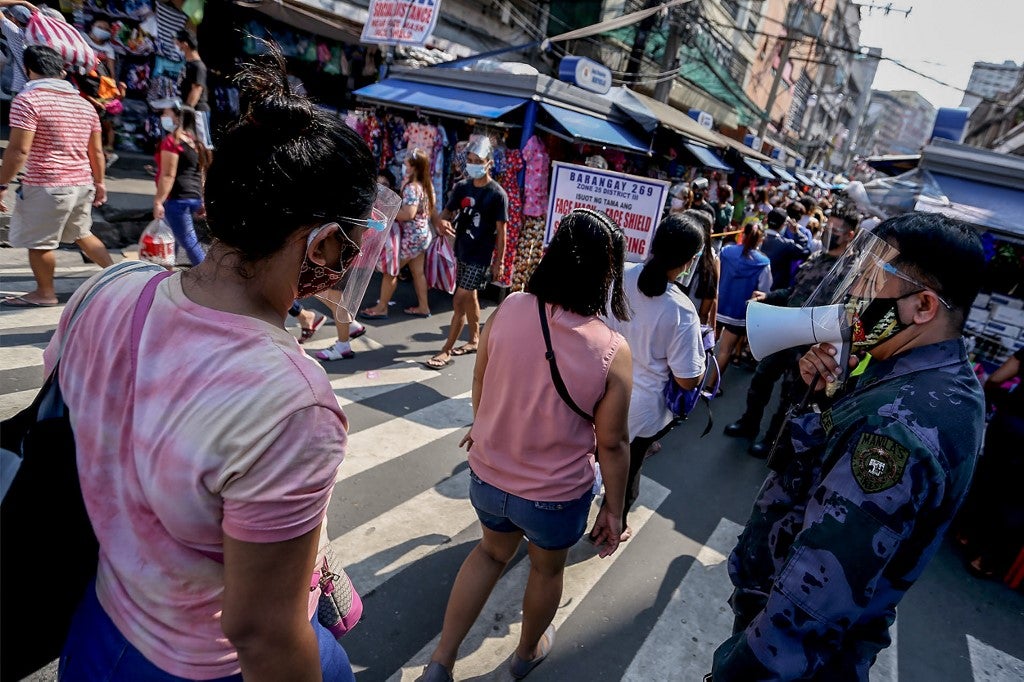 MANILA, Philippines — President Rodrigo Duterte has called infectious disease experts and the managers of the country’s COVID-19 response to a special meeting on Saturday to discuss possible changes in policies to deal with the new coronavirus variant that emerged in the United Kingdom, according to presidential spokesperson Harry Roque.

Duterte will cut short his visit to Davao City, where he spent Christmas with his family, to return to Malacañang for the 6 p.m. meeting with members of the Inter-Agency Task Force for the Management of Emerging Infectious Diseases, Roque said.

In a Viber message to reporters, Sen. Christopher “Bong” Go, a longtime aide of the President, said Duterte was “very much worried” about the new variant of SARS-CoV-2, the virus that causes the severe respiratory disease.

British Prime Minister Boris Johnson, who announced more stringent lockdown measures over the Christmas holiday in the United Kingdom, said the new variant “may be up to 70 percent more transmissible than the original version of the disease.”

Scientists said in a new study that the mutated coronavirus was on average 56 percent more contagious than the original version.

Roque said the officials would determine whether there was a need “to change some policies in the fight against COVID-19” like the possible extension of the one-week ban on people traveling from the United Kingdom, which started on Dec. 24, or to impose the same ban on travelers from places that have reported cases of the new variant like Singapore, Nigeria, and Hong Kong.

If the new variant is proven to spread more easily, there would be a need for stricter implementation of health and safety protocols to prevent the spread of the disease, he said.

But when asked whether a more infectious variant would mean stricter quarantine, Roque said, “Maybe not because we are really making sure our people have a means of living.”

“And I think this Christmas, despite doubts, Filipinos have shown that they can follow minimum health standards,” he added.

In the new study, scientists warned that the more contagious mutated coronavirus may need a faster vaccine rollout to help prevent more deaths.

According to the study published on Wednesday by the Centre for the Mathematical Modelling of Infectious Diseases at the London School of Hygiene and Tropical Medicine, researchers were still uncertain whether the new variant was more or less deadly than its predecessor.

“Nevertheless, the increase in transmissibility is likely to lead to a large increase in incidence, with COVID-19 hospitalizations and deaths projected to reach higher levels in 2021 than were observed in 2020, even if regional tiered restrictions implemented before 19 December are maintained,” they said.

The authors of the study said the national lockdown imposed in England in November was unlikely to prevent an increase of infections “unless primary schools, secondary schools, and universities are also closed.”

Any easing of control measures would likely prompt “a large resurgence of the virus,” they said.

This means that “it may be necessary to greatly accelerate vaccine rollout to have an appreciable impact in suppressing the resulting disease burden.”

The discovery of the new variant set off alarm bells worldwide just as more countries began vaccination campaigns to halt a pandemic that has claimed more than 1.7 million lives since it emerged a year ago in China.

Many countries quickly imposed bans on travel from Britain, but EU governments have relaxed the restrictions.

The co-founder of BioNTech—Pfizer’s partner in producing the vaccine that is being rolled out worldwide this week—has said its drug is “highly likely” to work against the mutated virus and otherwise can be adapted in six weeks.

In Cebu City, health authorities in Central Visayas appealed to privately owned and government-run hospitals in the region to maintain their 30-percent allocated coronavirus beds in wards and intensive care units to prepare for a possible post-holiday surge in COVID-19 cases.

“Should there be another spike in COVID-19 cases, God forbid, we should be ready to address the needs of patients,” said Dr. Mary Jean Loreche, spokesperson of the Region 7 office of the Department of Health (DOH).

She said Cebu City, once tagged as the second epicenter of COVID-19 in the country after Metro Manila, has a “very active and efficient” Emergency Operations Center. Critical care utilization rate in hospitals is also down from more than 80 percent to 19 percent, Loreche said.

Although Central Visayas already flattened the curve last September, she said people should not be complacent and should continue observing health protocols like wearing face masks and face shields, practicing physical distancing, frequent hand-washing, and staying indoors as much as possible.

Central Visayas, which includes Cebu, Bohol, Negros Oriental, and Siquijor, has recorded a total of 24,776 cases with 22,748 recoveries, and 1,424 deaths since the start of the pandemic, according to the DOH 7.

As of Thursday, only 604 cases remained active.

Most new cases in QC

The DOH reported 1,885 new infections on Christmas Day, raising the national total to 467,601.

Another 307 patients have recovered, bringing the total number of COVID-19 survivors to 430,791.

The death toll increased to 9,062 after seven patients died.

The recoveries and deaths left the country with 27,748 active cases, of which 81.7 percent are mild, 10.4 percent asymptomatic, 0.32 percent moderate, 2.6 percent severe and 4.9 percent critical.

While the national government has yet to seal a deal to acquire a vaccine, some local authorities have started looking for funds to purchase vaccines for their constituents.

Cebu City Mayor Edgardo Labella said the city had set aside at least P500 million to procure and distribute a vaccine.

He said Carlito Galvez Jr., who was in charge of the national vaccination program, told him that Cebu City would be among the areas that would be prioritized.

Loreche said at least 60 percent of the population must be vaccinated to achieve herd immunity.

“It would be a waste of funds, time and efforts if we would fall short of that and find it difficult to attain. This is why it will definitely require partnerships and collaborations to become successful,” she added. —WITH REPORTS FROM MELVIN GASCON, ADOR VINCENT MAYOL, JOVIC YEE AND AFP INQ