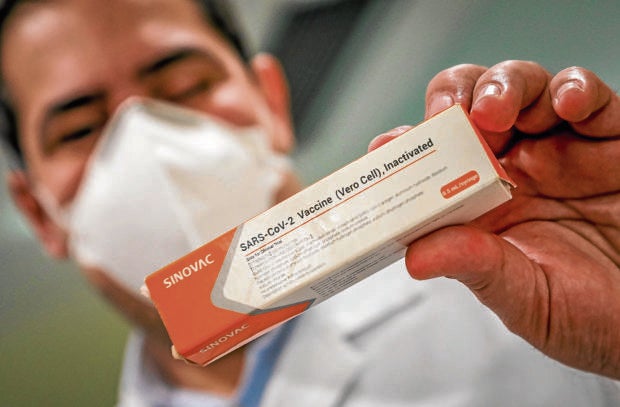 MADE IN CHINA A doctor shows the Sinovac vaccine. —AFP

MANILA, Philippines — Sen. Juan Miguel Zubiri on Saturday urged the Inter-Agency Task Force for the Management of Emerging Infectious Diseases (IATF) to rethink its plans to avail of vaccines with low efficacy rate, calling this proposition as “unacceptable.”

“We appeal to our task force leaders to look at the effectiveness of the [vaccine] rather than political or geopolitical reasons. The safety of our people should come first not the feelings of our neighboring friends,” he said.

Zubiri did not mention a specific brand, but he made the remark after the IATF announced that it preferred vaccines made by Chinese pharmaceuticals Sinovac, Sinopharm, and CanSino because of their “affordability and production capability.”

The government also announced that it was at an advanced stage in forging a deal for the purchase of 25 million doses from Sinovac after Western drugmakers struggled to meet the demand of nations, particularly the United States, which have already paid for the vaccines even before the completion of clinical trials.

But Brazil, the first country to complete a late-stage trial of the Sinovac vaccine, said on Dec. 23 that the vaccine, called CoronaVac, was only more than 50-percent effective based on trial data.

The Department of Science and Technology said CoronaVac’s 50-percent efficacy rate is “acceptable” because that was the minimum requirement of the World Health Organization.

Zubiri acknowledged that several factors must be considered in choosing a vaccine for Filipinos, mainly safety, efficacy, pricing, and ease of distribution and implementation.

But spending taxpayers’ money for vaccines that were only 50-percent effective would be a “total waste of funds and resources,” he added.

“That means there’s a 50-50 chance of you getting COVID even after being vaccinated, [which] is a joke!” he said.

He said other brands, such as Pfizer, have a higher efficacy rating of 95 percent, but the country lacks storage facilities that can maintain temperatures of -70 degrees Celsius. INQ