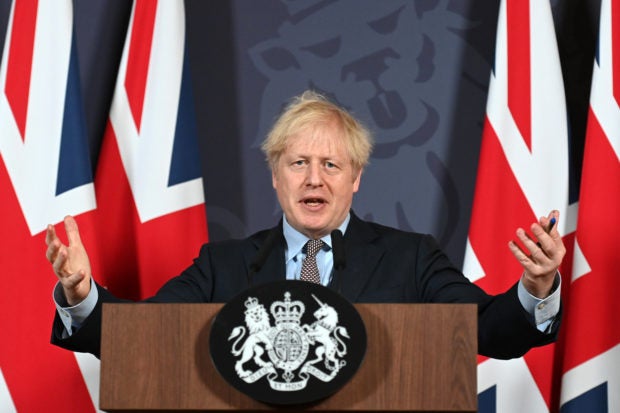 Britain’s Prime Minister Boris Johnson gestures as he holds a remote press conference to update the nation on the post-Brexit trade agreement, inside 10 Downing Street in central London on December 24, 2020. – Britain said on Thursday, December 24, 2020, an agreement had been secured on the country’s future relationship with the European Union, after last-gasp talks just days before a cliff-edge deadline. (Photo by Paul GROVER / POOL / AFP)

Brussels, Belgium — Britain and the European Union struck a trade deal Thursday after 10 months of intense negotiation allowed them to soften the economic shock of Brexit.

When the UK leaves the EU single market at the New Year, it will not now face tariffs on cross-Channel commerce, despite breaking off half a century of close partnership.

“At the end of a successful negotiations journey, I normally feel joy. But today, I only feel quiet satisfaction and, frankly speaking, relief,” she said, citing British playwright Shakespeare: “Parting is such sweet sorrow.”

But she also showed her steely side, warning that, protected by the deal from unfair British competition, “The single market will be fair and remain so.”

And she urged the 440 million Europeans remaining in the 27-nation union to put the drama of the four years since Britain’s Brexit referendum behind them and to look to the future.

“I say it is time to leave Brexit behind. Our future is made in Europe,” she said.

Britain formally left the EU in January after a divisive referendum in 2016, the first country to split from the political and economic project that was born as the continent rebuilt in the aftermath of World War II.

But London remains tied to the EU’s rules during a transition period that runs until midnight on December 31, when the UK will leave the bloc’s single market and customs union.

The final 2,000-page agreement was held up by a last-minute dispute over fishing as both sides haggled over the access EU fishermen will get to Britain’s waters after the end of the year.

Von der Leyen said that although the UK would become a “third country” it would be a trusted partner.

Johnson — who rode to power pledging to “get Brexit done” — insisted it was a “good deal for the whole of Europe and for our friends and partners as well.”

“It will not be a bad thing in my view to have a prosperous, dynamic, and contented UK on your doorstep,” he said from Downing Street.

Leaders around the continent were quick to herald the 11th-hour accord that heads off the threat of Britain crashing out of the EU after 47 years of shared history with no follow-on rules.

Irish premier Micheal Martin — whose EU member state would have been hard hit by a no-deal — said the accord was the “least bad version of Brexit possible.”

“There is no such thing as a ‘good Brexit’ for Ireland. But we have worked hard to minimize the negative consequences,” he said.

German Chancellor Angela Merkel said she was “confident” that the deal was a “good outcome” as it now goes over to EU member states to agree. 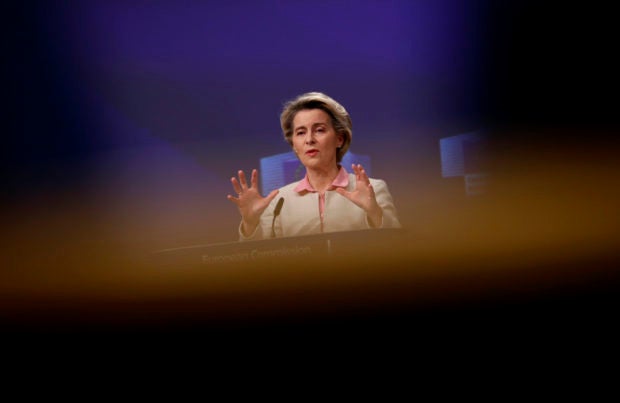 European Commission President Ursula von der Leyen gestures during a media conference on Brexit negotiations at the EU headquarters in Brussels, on December 24, 2020. – Britain said on December 24, 2020, an agreement had been secured on the country’s future relationship with the European Union, after last-gasp talks just days before a cliff-edge deadline. (Photo by Francisco Seco / POOL / AFP)

For French President Emmanuel Macron — often portrayed as a bogeyman by the British tabloids — “Europe’s unity and firmness paid off.”

Following the announcement of the political accord, von der Leyen’s Commission will send the text to the remaining 27 European member states.

Their ambassadors will meet on Friday, Christmas Day, and are expected to take two or three days to analyze the agreement and decide whether to approve its provisional implementation.

The UK parliament will also have to interrupt its end-of-year holidays to vote on the deal on December 30, and with the opposition backing its implementation is should pass easily.

Assuming the process goes as planned, the negotiating teams will have agreed on the mammoth deal in record time.

But with Britain outside the EU single market and customs area, cross-Channel traders will still face a battery of new regulations and delays.

Economists expect both economies, already weakened by the coronavirus epidemic, to take a hit as supply chains are disrupted and costs mount.

Despite this, the threat of a return to tariffs will have been removed, and relations between the former partners will rest on a surer footing.

All sides will look to put a positive spin on the deal to make it look like they did not give too much away.

But it will be seen as a win by Johnson, as well as a success for von der Leyen and her chief negotiator Michel Barnier, who led almost 10 months of intense talks with Britain’s David Frost. 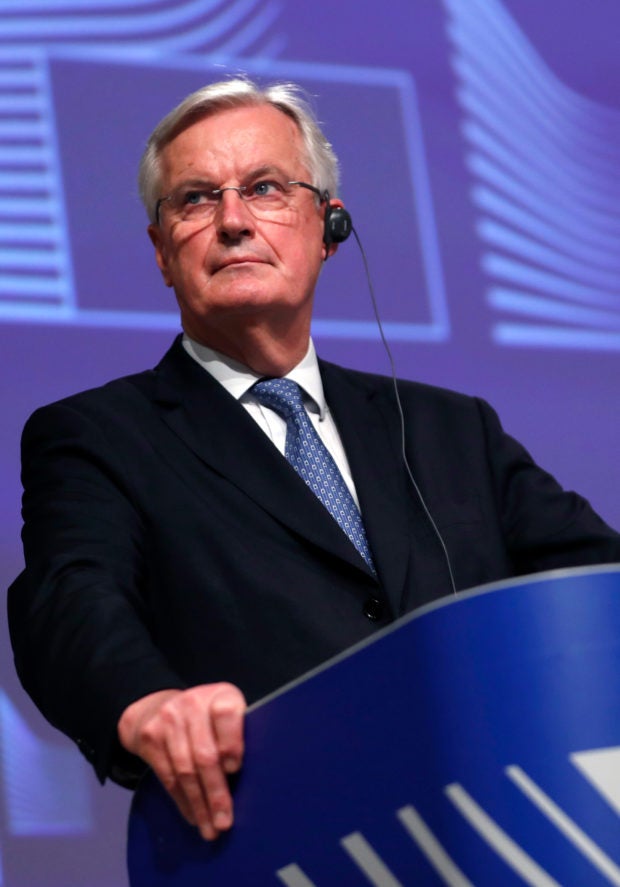 European Commission’s Head of Task Force for Relations with the United Kingdom Michel Barnier looks during a media conference on Brexit negotiations at EU headquarters in Brussels, on December 24, 2020. – Britain said on December 24, 2020, an agreement had been secured on the country’s future relationship with the European Union, after last-gasp talks just days before a cliff-edge deadline. (Photo by Francisco Seco / POOL / AFP)

After the shock 2016 referendum, in which British voters narrowly chose to leave the union, Brexiteers boasted that they could win the “easiest trade deal in history.”

But European capitals were concerned that if such a large rival on their doorstep were to deregulate its industry, their firms would face unfair competition.

Brussels insisted the only way to keep the land border between Ireland and the UK open was to keep Northern Ireland, a British province, within its customs union.

And members balked at giving up access to Britain’s rich fishing waters, which support fleets in France, Belgium, Denmark, Ireland, and the Netherlands.

It was the question of fish that emerged as the last stumbling block as late as this week when member states — led by France — rebuffed UK demands.

London pushed to reduce EU fishing fleets’ share of the estimated 650-million-euro annual haul by more than a third, with changes phased in over three years. The EU was insisting on 25 percent over at least six years.

In the end, the final agreement settled on the EU’s figure but cut the length of the transition period during which it would be phased into five-and-a-half years, an EU official said.

After this time, access to Britain’s fishing grounds will be negotiated on an annual basis.

Read Next
Virus variant to cause more deaths in Britain – study
EDITORS' PICK
Nestlé Philippines’ ‘NESCAFÉ Plan’ bags Grand Anvil at PRSP 56th Anvil Awards
822 NPA-free barangays set to get P20-M gov’t aid — Esperon
Pope Francis to meet top cleric Sistani on second day in Iraq
Don’t waste the hope of vaccines, warns WHO
Every Filipino home can now be a smart home with realme TechLife
Smart reinforces superiority with best speed and mobile video experience in PH
MOST READ
So: I lacked connections to succeed in PH ‘culture’
Robredo on Sara Duterte leading poll surveys: Why are Filipinos drawn to leadership of this kind?
US weapons, hardware in exchange for VFA
US lays out list of aid to ‘satisfy’ Duterte following VFA payment demand
Don't miss out on the latest news and information.