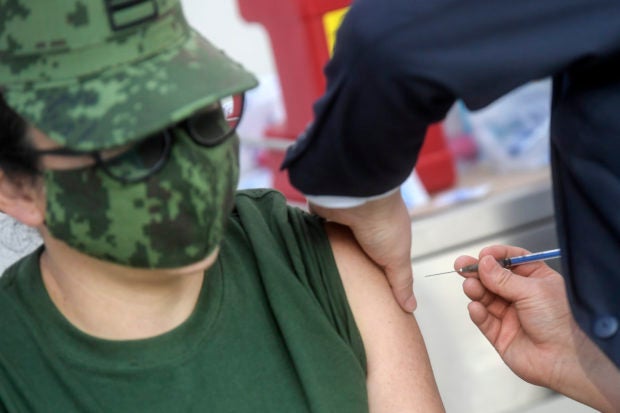 A Mexican military medical receives the Pfizer/BioNTech COVID-19 vaccine jab, at the General Hospital in Mexico City, on December 24, 2020. – Mexico started a mass coronavirus vaccination program on Thursday with a nurse first to be shown receiving the jab in the country with one of the world’s highest Covid-19 death tolls. (Photo by PEDRO PARDO / AFP)

Mexico City, Mexico — Frontline medical workers in Mexico and Chile were among the first to be vaccinated against the coronavirus Thursday as several countries in hard-hit Latin America launched mass immunization programs.

“It’s the best gift I could receive in 2020,” 59-year-old Mexican nurse Maria Irene Ramirez said as she received the injection at a hospital in the capital on Christmas Eve.

“It makes me safer and gives me more courage to continue in the war against an invisible enemy. We’re afraid but we must continue.”

Mexico’s televised rollout came a day after the first 3,000 doses produced by US pharmaceutical giant Pfizer and its German partner BioNTech arrived by courier plane from Belgium.

Mexico has registered more than 120,000 COVID-19 deaths — the world’s fourth-highest toll after the United States, Brazil, and India.

Brazil, which has reported nearly 190,000 deaths, is still negotiating the purchase of 350 million doses of coronavirus vaccines for 2021.

Immunization has been a highly politicized issue and far-right President Jair Bolsonaro has repeatedly said he will not take a vaccine.

In Chile, 46-year-old nursing assistant Zulema Riquelme was the first person shown receiving the jab, hours after the first 10,000 doses of the Pfizer-BioNTech vaccine arrived by plane.

“I’m very excited and nervous — many emotions,” she said after being inoculated in the presence of President Sebastian Pinera in the capital. 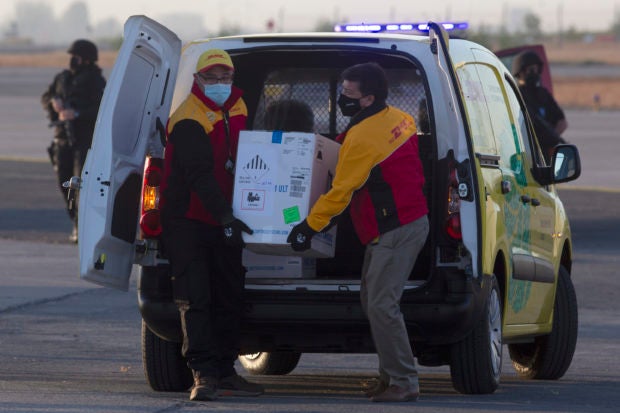 Workers carry a box containing the Pfizer-BioNTech COVID-19 coronavirus vaccine to a helicopter for distribution at the international airport in Santiago on December 24, 2020 (Photo by CLAUDIO REYES / AFP)

Mexico was the first country in Latin America to receive the Pfizer-BioNTech vaccine, followed closely by Chile as well as Costa Rica, which was also due to begin an immunization program on Thursday.

“It may be the beginning of the end of this pandemic,” Costa Rican President Carlos Alvarado said.

Argentina, meanwhile, received the first 300,000 doses of Russia’s Sputnik V vaccine on Thursday on a special flight from Moscow.

It is the only Latin American country to have so far approved the Russian shot, which has faced criticism because it was registered before the start of large-scale clinical trials.

Argentina and Mexico also have an agreement with Britain’s AstraZeneca to produce its vaccine to supply to Latin American nations.

Mexico City and surrounding areas last week announced a new suspension of all non-essential activities, warning that hospitals were in danger of being overwhelmed by a spike in the number of cases.

The government has promised to make vaccinations available free of charge across the country of almost 129 million people — a massive logistical challenge involving the armed forces.

The first doses were whisked to a military installation in the south of Mexico City on Wednesday, guarded by a security escort to prevent them from falling into the hands of the country’s powerful criminal gangs.

The foreign ministry said that 1.4 million doses of the Pfizer-BioNTech vaccine would arrive by January 31, out of the 34.4 million that the US company has agreed to deliver.

The country also has preliminary purchase agreements with China’s CanSino Biologics for 35 million doses and with AstraZeneca for 77.4 million doses.

It is also part of the international COVAX mechanism aimed at ensuring equitable access for all countries, which allows it to buy 51.6 million additional vaccines.

Chile has reserved 30 million doses of three vaccines — enough to immunize 15 million people in the country of 18 million by mid-2021, according to Pinera.