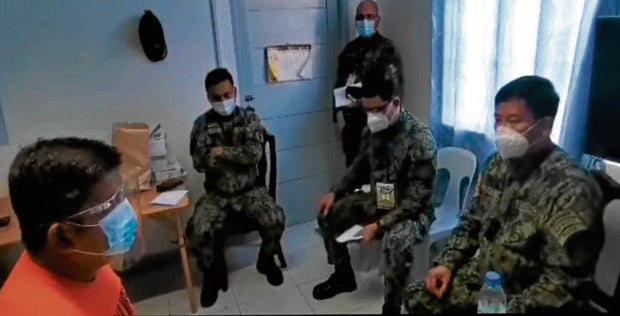 SORRY FOR HIS CRIME Police Senior Master Sergeant Jonel Nuezca (left) gets a scolding from Police Brig. Gen. Valeriano de Leon (right), the Central Luzon police chief, in this picture from a video released by the authorities on Wednesday. Nuezca has admitted shooting dead a mother and her son in Paniqui, Tarlac, on Sunday. The Philippine National Police chief says the video will be used in Nuezca’s prosecution. —SCREENGRABFROMPNP PRO3-PIO VIDEO

The policeman who shot dead a woman and her son in Paniqui, Tarlac province, on Sunday says he is sorry for what he has done and is begging for help from his superiors.

In a video posted on Thursday on the Facebook page of the Central Luzon police, Police Brig. Gen. Valeriano de Leon, the regional police chief, is seen giving Police Senior Master Sergeant Jonel Nuezca a dressing down for the backlash to the Philippine National Police (PNP) of his shooting dead Sonya Gregorio, 52, and her son, Frank Anthony Gregorio, 25, during a confrontation over right of way in their neighborhood at Barangay Cabayaoasan in Paniqui on Sunday afternoon.

“You dragged the [entire] PNP through the mud. In your many years of service, I’m sure you’ve experienced our ups and downs. Weren’t you taught how to deal with that?” De Leon told Nuezca, referring to dealing with anger by officers. “You could have just pulled your breath and let go. Instead, you killed those people like dogs.”

‘I regret it so much’

“I admit my mistake. I was carried away by my strong emotions,” Nuezca replied. “I regret it so much.”

De Leon told Nuezca, who has been indicted for two counts of murder, that he was likely to be dismissed from the service.

“Please, sir, I beg you for help, for my family,” Nuezca said.

“Pray hard. We’re giving your family protection because everyone is mad at you, and you have no more friends. Pray for them, because we can’t control everyone,” De Leon said.

The video was taken earlier on instructions from Police Gen. Debold Sinas, the PNP chief, during a visit to the wake of the Gregorios at the family home in Cabayaoasan.

Sinas told De Leon to talk to Nuezca, 43, and record the officer’s confession for use as evidence by the prosecution.

In a televised briefing on Thursday, Sinas said the two children who had taken videos of the killings had agreed to testify for the prosecution.

He said the two minors—a 12-year-old and a 16-year-old—had submitted sworn statements and would be given government protection.

Their guardians have also agreed to allow them to testify, Sinas said.

“We have provided them with security and they will be enrolled in the [Witness Protection Program],” he added.

No delays in case

Sinas said he had spoken to the Gregorios’ family and apologized for Nuezca’s actions. He said he promised the family that there would be no delays in the case.

The PNP chief said he had talked to local officials in Paniqui and requested professional help for the two minors and several other children who had witnessed the killings.

He said even the daughter of Nuezca, who was on the scene when the killings happened, would also get professional attention. De Leon, he said, has seen the girl and learned from the family that she has been suffering from sleeplessness since Sunday.

Rambaoa said the children could be suffering from posttraumatic stress disorder.

“Some of them are having nightmares and are frightened by any loud noise,” he said, indicating the children are suffering from the psychological effects of gunfire.

“They have also started to lose appetite,” Rambaoa said, quoting the children’s families.

Policemen have been deployed to secure the children, he said.

“The children are heavily guarded, although there are no threats to their lives,” Rambaoa said. INQ