Up to 6 dead as ‘Dodong’ exits the Philippines 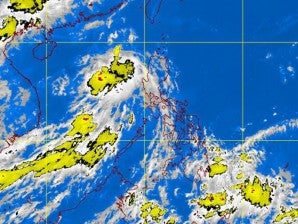 MANILA, Philippines – (UPDATE 5) Up to six people were killed and 27 others were missing at sea as Tropical Storm “Dodong” (international codename: Sarika) headed out of Philippine waters Friday with many communities still flooded, rescuers said.

Four people drowned in the major southern island of Mindanao earlier this week while a boy died after falling into a swollen creek in Batangas city near Manila, and a woman drowned on the central island of Tablas in Romblon, they said.

Mateo, the boy who fell into the swollen creek in Barangay (village) Sampanga, Batangas City, was recovered in a river near Tiera Verde subdivision Thursday afternoon. Mortel, a resident of Sitio (sub-village) Kabanga, Barangay Carmen, San Agustin, Romblon, drowned after being carried away by the strong current while crossing the Kabangan river on Wednesday.

The NDRRMC said 24, not 26 Filipino fishermen as reported earlier, were missing near the Spratly Islands in the South China Sea. They were found and rescued Friday noon.

The 45-ton F/B 3MS WOF, owned by a Leo Caranay, which was carrying agricultural products, was driven by strong winds off the town of Sariaya, south of Manila, it added.

Meanwhile, Fred Castelo, Bolinao municipal administrator, said another boat sank some 16 kilometers off Santiago Island, also in Bolinao, on Thursday but the five fishermen on board were rescued.

He said Bolinao officials also received reports that at least two other fishing boats from the town remained missing but they could not determine how many people were on board these vessels.

Several hundred people remained at evacuation centres across Luzon early Friday while waiting for floodwaters to recede, the NDRRMC said in its update.

Dodong was heading for southeastern China on Friday with peak winds of 65 kilometers (40 miles) an hour, after brushing the west coast of the main Philippine island of Luzon, the Philippine Atmospheric Geophysical and Astronomical Services Administration (Pagasa) said.

Pagasa also lifted all storm warning signals in the country.

Dodong has maintained its strength with 65 kilometer per hour winds near the center and gusts of up to 80 kph.

The tropical storm has picked up speed and was now moving at 25 kph still headed north northwestward, Pagasa said.
Dodong is expected to enhance the southwest monsoon and will bring rains over the western section of Northern and Central Luzon, Pagasa said.