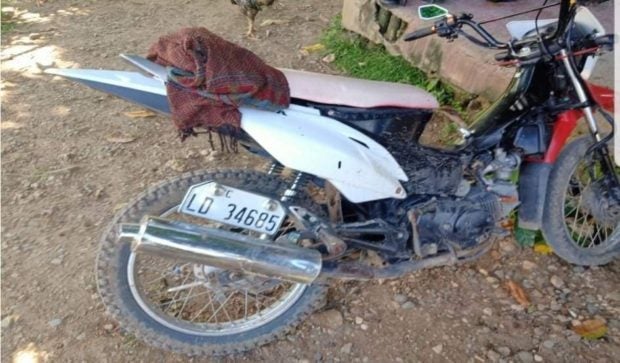 A motorbike allegedly owned by a suspected member of the Bangsamoro Islamic Freedom Fighters who was killed in an encounter in Maguindanao on Dec. 23, 2020. WESMINCOM

MANILA, Philippines — A suspected member of the Bangsamoro Islamic Freedom Fighters was killed in an encounter in Maguindanao on Wednesday morning, the military said.

A 45-minute exchange of gunfire resulted in the death of one suspected BIFF and injury of a Civilian Armed Auxiliary (CAA) member.

The body of the slain suspected BIFF identified as Nasser Kandao was recovered while clearing the encounter site, Vinluan said. Troops also found one M16 rifle, one XRM motorcycle, and two short magazines.

The wounded CAA was brought to the hospital for treatment.

Soldiers have been ordered to conduct combat patrol along Ampatuan and Shariff Aguak National Highway and establish blockade on the possible withdrawal routes for fleeing suspects.