No flights from UK to keep new virus variant out 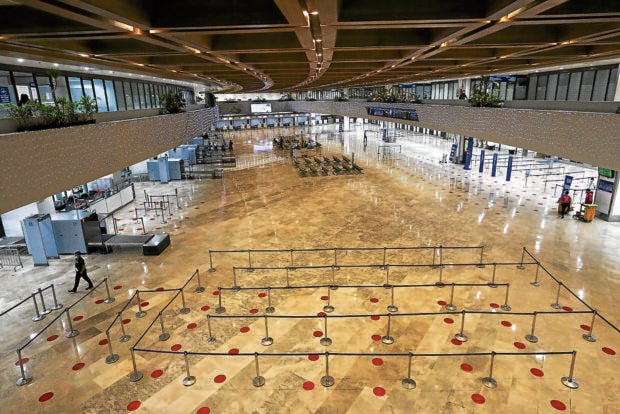 MANILA, Philippines — The government has imposed a weeklong travel ban on the United Kingdom to keep out of the country a new variant of the coronavirus that causes severe respiratory disease COVID-19.

President Rodrigo Duterte approved on Tuesday night the recommendation of the Inter-Agency Task Force for the Management of Emerging Infectious Diseases to restrict all inbound travel from the United Kingdom from Dec. 24 to Dec. 31.

Authorities allowed entry to travelers who arrived before 12:01 a.m. on Thursday.

Health Secretary Francisco Duque III said on Wednesday that out of an abundance of caution, all travelers arriving from the United Kingdom ahead of the weeklong travel ban would have to complete a 14-day quarantine regardless of their test results.

Duque said the mandatory completion of the two-week quarantine at Athlete’s Village in New Clark City was intended to ensure that anyone unknowingly carrying the new variant of the SARS-CoV-2 virus would not spread it in the country.

“We can’t be too sure with this new [variant] of the virus from the UK. It is better that we exercise caution and they complete their quarantine… because their test may turn out to be a false negative if they have been swabbed early,” Duque said in a virtual forum.

“Their viral load may increase toward the end of the [virus’ incubation period],” he added.

The restriction came just days after British Prime Minister Boris Johnson placed London and southeast England on lockdown after scientists found a more infectious variant of the COVID-19 virus, which he said “may be up to 70 percent more transmissible than the earlier strain.”

As of this reporting, more than 40 countries have imposed a travel ban on the United Kingdom.

The World Health Organization earlier said that while studies were still going on, there was still no evidence that the new variant made the disease more severe or rendered the vaccines being rolled out ineffective.

Initial analysis of the Philippine Genome Center (PGC) also suggests the variant isn’t present in the country as “local isolates are not closely related with the UK variant,” Duque said. But PGC, the Research Institute for Tropical Medicine, and the University of the Philippines’ National Institutes of Health are conducting further studies on this new variant, he said.

“We are confident that they would be able to give us a more detailed characterization of the … new [variant]. But at the end of the day, while we know that it’s a much faster [variant] of the virus [there’s] no evidence to show that it has increased the severity or the virulence [of the virus] nor it is affecting vaccine efficacy,” Duque said.

Asked if similar travel restrictions will also be imposed on countries that have reported the new variant, Duque said the health department would have to consult first with the country’s infectious disease experts.

“Our ears are stuck on the ground to listen for reports on developments with regard to this new [variant],” he said.

Apart from the United Kingdom, a number of cases with the new variant have also been reported in Denmark, the Netherlands, and Belgium, according to the European Center for Disease Prevention and Control.

The Department of Tourism (DOT) said on Wednesday it supported the UK travel ban.

“With this temporary suspension, the DOT empathizes with the affected families who would not be able to spend the holidays with their loved ones from the UK,” the DOT said in a statement.

The Bureau of Immigration said it would implement the ban.

“[E]ffective Dec. 24, all passengers who have been to the United Kingdom in the last 14 days are temporarily restricted from entering the Philippines,” Immigration Commissioner Jaime Morente said in a statement.

He said the restrictions covered even transit passengers from the United Kingdom.

“I have instructed a strict implementation of our 100 percent passport inspection to ensure that we are able to detect anyone who has been to the UK in the last 14 days,” he said.

Morente appealed to all airlines operating in the Philippines not to carry travelers who had been to the United Kingdom in the last 14 days.

“We are constrained to implement this to ensure that our health-care system is given ample time to respond to this latest development [in] the pandemic,” he said.

He said travelers who arrived from the United Kingdom before Dec. 24 would be allowed entry, but would be referred to the Bureau of Quarantine and the One-Stop Shop for testing and isolation.

“Filipinos will be allowed to enter the country even after Dec. 24, but will also be referred to the [quarantine bureau] and the One-Stop Shop,” he added.

Quoting the coronavirus task force, the immigration bureau said outbound travel to the United Kingdom remained allowed, but the travelers must show confirmed roundtrip tickets, travel, and health insurance to cover disruptions in case of COVID-19 infections during their stay abroad, and they must sign declarations acknowledging the risks they faced in traveling abroad, including delay in their return to the Philippines. —WITH REPORTS FROM TINA G. SANTOS AND JEROME ANING INQ