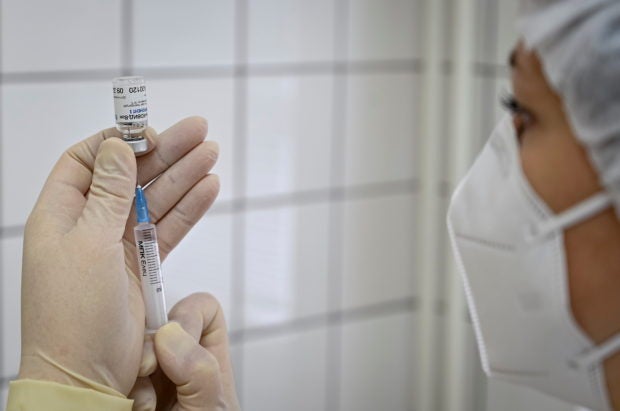 A medical worker fills a syringe with Sputnik V (Gam-COVID-Vac) vaccine as she prepares to vaccinate a Russian Army service member at a clinic in the city of Rostov-On-Don, Russia December 22, 2020. REUTERS/Sergey Pivovarov

MOSCOW — Russia stopped taking in new volunteers in the trial of its first vaccine against COVID-19 on Wednesday, with developers saying it was unethical to administer a placebo to participants now that the shot was increasingly available to the public.

Russia began rolling out the Sputnik V vaccine as part of a national inoculation program in early December as the final, phase III trial continued in the capital at the same time.

Now the trial will be cut short, with only 31,000 volunteers taking part rather than the planned 40,000, the health ministry said in a statement.

Alexander Gintsburg, director of the Gamaleya Institute which developed the vaccine, was cited by the RIA news agency as saying that the decision was based on previous trial results, which showed the vaccine was safe.

“Everything has now been proven, while the pandemic is ongoing,” Gintsburg said. “So a placebo is not good at all.”

People already participating in the trial will continue to be monitored for the full six months, the ministry said. It added that there would be no “unblinding” – where the quarter of participants who received a placebo are informed of the fact.

Russia is in a unique position because it approved Sputnik V very early, in August, after phase I and II human trials showed that it was safe and produced the antibodies needed for a protective immune response.

It began inoculating small numbers of people in high-risk groups soon after, at the same time launching a large-scale, final-stage trial in the capital. The rollout ramped up this month and more than 200,000 Russians have now received the shot.

The decision to cut the trial short underscores problems for drugmakers around the world as the pressure of the pandemic pushes regulators to authorise new vaccines and start administering them faster than they normally would.

It also means that Russia is likely to base its final assessment of the efficacy of Sputnik V on fewer cases of infection among participants than other vaccine makers.

Russia’s latest data, collected after around 23,000 people were enrolled in the trial, showed the shot to be 91.4% effective at protecting people from COVID-19, compared to a placebo. Published on Dec. 14, the analysis was based on 78 cases of infection, including 62 among the placebo group.

But the health ministry said the size of the trial as it stood now was sufficient to assess the shot’s safety and efficacy. Data from the trial will be published in an international medical journal, developers have said.

With the Sputnik V shot increasingly available to Muscovites as part of the national inoculation program, officials have been discussing the ethical concerns surrounding placebo enrolment for at least two weeks.

At the same time, some trial volunteers, who suspected they had received a placebo, began voting with their feet: quitting the trial to try to get a vaccination elsewhere.

Reuters spoke with six volunteers who did just that. The health ministry did not respond to a request for comment on how many people have formally left the trial.

Pfizer Inc. of the United States and Germany’s BioNTech SE, whose vaccine is being rolled out in Europe and the United States, say they plan to notify phase III trial participants in the U.S. once they become eligible to receive shots. They could then opt to be told whether or not they received a placebo.

The American drug maker Moderna proposed last week to unblind all its trial volunteers at the same time, offering the vaccine to those who had received a placebo.