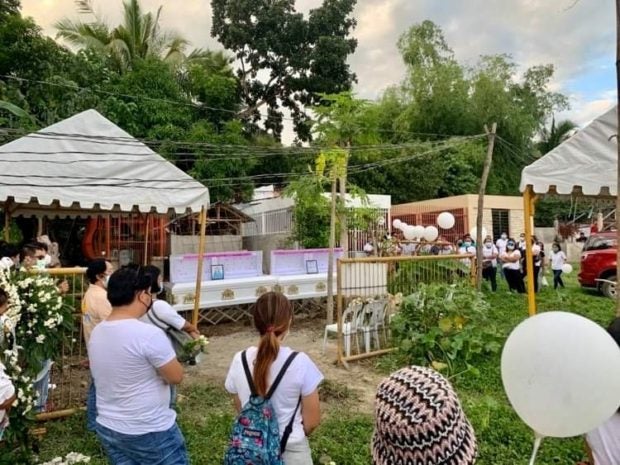 LAST RESPECTS Relatives, friends, and colleagues pay their last respects to Guihulngan City health officer Mary Rose Sancelan and her husband, Edwin. They released white balloons during the couple’s burial as they sought justice for their deaths. —CONTRIBUTED PHOTO

BACOLOD CITY — Cries for justice and respect for human rights rang out on Tuesday as rural doctor Mary Rose Sancelan and her husband, Edwin, were buried at a private cemetery in Guihulngan City, Negros Oriental province.

“Our people’s doctor (Mary Rose) dedicated her life to end both the COVID-19 pandemic and the pandemic of injustice. [But] our beloved martyr took eight bullets on our behalf; and her husband, Edwin, took five. Sadly, their son, Red Emmanuel, bears all the pain of the violent demise of his parents. Together, we accompany him in his quest for justice,” San Carlos Bishop Gerardo Alminaza said during the funeral Mass at the Our Lady of Buensuceso Parish Church. Mary Rose, Guihulngan’s health officer and chief of the city’s Inter-Agency Task Force Against Emerging Infectious Diseases, and her husband were on board a motorcycle on their way home to Carmeville Subdivision in Barangay Poblacion at 5:20 p.m. on Dec. 15 when they were shot by one of two men on board another motorcycle that drove alongside them.

The attack came about a year after Mary Rose expressed fears over her safety after she was red-tagged by a group called Kawsa Guihulnganon Batok Komunista (or “Kagubak,” loosely translated as Concerned Guihulnganons against Communists). She was the first on the list of Guihulngan residents whom the anti-communist vigilante group Kagubak accused of being supporters of the Communist Party of the Philippines and the New People’s Army (NPA).

The list, which was released in 2018, identified her as Ka JB Regalado, then spokesperson for the Apolinario Gatmaitan Command of the NPA.

Alminaza appealed to the faithful to wear white on Christmas Eve and Christmas Day and on New Year’s Eve and New Year’s Day “to express our desire for and commitment to peace, sanctity of life, human dignity and human rights, and our collective call to end the killings, the COVID-19 pandemic and the abuse of our common home.”

Church bells in the Diocese of San Carlos will start ringing at 8 p.m. on Christmas Day to call for justice and an end to the killings on Negros Island.

Alminaza said the International Criminal Court, the Office of the United Nations High Commissioner for Human Rights, Amnesty International, Human Rights Watch and other agencies have more reasons to demand from the Philippine government accountability for the rampant human rights violations and the absence of the rule of law.

“We can never speak of peace when the bloodbath continues. We are not Christians at all if we use violence in the name of enforced peace. Peace is real when we stop firing our guns, when we refuse to pull the trigger on a person’s life, and when we stop becoming enablers of injustice,” the bishop said. “It is sad that militarization defines our peace and order, not the security of our citizens. We call on our city to seriously work for justice among the citizens living in Guihulngan. We call upon our mayor and city officials to take to heart their utmost duty to protect the people in this city. We challenge our local government to not become a political hostage of this oppressive killing policy,” he added. The Sancelans’ relatives declined to issue any statement, saying they wanted to keep their mourning private.

In a pastoral message, Alminaza reiterated the need to end the killings in Negros. “Our island awaits the day when the blood from the pandemic of violence stops flowing. When will our priests in the diocese end burying victims of these orchestrated acts of terrorism?” he said. The killing of the Sancelan couple is among the 106 cases of extrajudicial killings recorded on Negros Island under the Duterte administration.

“As your pastor, I am taking the mantle of the cause of their martyrdom. We stress that merely speaking about this senseless violence in our midst is not enough. Our collective outrage should move us to collectively act against it,” Alminaza said. INQ